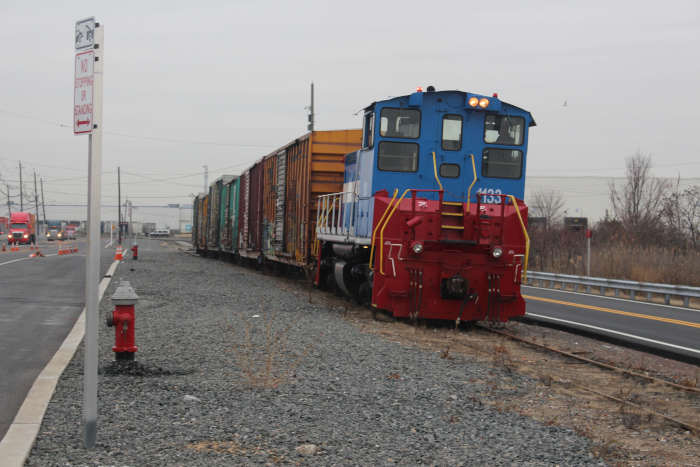 The Port of New York and New Jersey wants to make the process of removing cargo by train more efficient through the use of block stowage. Photo credit: Hugh R. Morley.

Aiming to improve rail flow, the Port of New York and New Jersey is encouraging ocean carriers to load vessels so that multiple containers heading for the same destination are stacked together. The promotion of so-called block stowage is part of a broader effort by the largest US East Coast port to increase the amount of railed cargo, a driver and measure of its ability to deepen its discretionary cargo reach.

Containers can be removed from a ship and loaded on a train faster when they’re stacked in the same part of a vessel.

The strategy, while not new, is taking on importance as the port looks for ways to improve flow as it seeks to increase the volume of cargo carried by rail from about 43 percent of its 1.5 million TEU rail capacity to 65 percent of that capacity by 2023. The port’s recent master plan forecast that cargo volumes through the port would increase from 7 million loaded and unloaded TEU in 2018 to between 11.5 million and 17 million by 2050, with much of the increase expected to be fueled by the port’s ability to attract discretionary cargo, especially to and from the Midwest.

The number of rail lifts in the port increased 4.3 percent in the first seven months of 2019, to 385,202 lifts, over the same period in 2018, according to port authority figures. The number grew 13 percent in 2018 over the year before, easily outpacing the 7 percent increase in loaded containers in the same period, the figures show.

Block stowage offers efficiency in unloading the vessel because “containers in a particular hold, for example, would be destined for the rail head,” said Beth Rooney, deputy director of the authority's port department. So, a block of containers headed for Chicago could be put on one section of the train, and a block going to Cleveland could be grouped in a different section, she said.

Without that kind of organization, “today rail boxes are loaded throughout the ship and moved to the rail terminal or into the container terminal yard on a box-by-box basis and the train is loaded by destination as the boxes arrive and are staged at the terminal,” she said.

The challenge of increasing the use of block stowage, however, is that there is not a “critical mass” of containers in most foreign ports destined for specific rail destinations to make it viable at most points of origin, she added.

A spokesperson for Maersk Line said block stowage, part of a new suite of products through its integrator strategy launched earlier this year, aimed at cutting shipper delivery times. The program is available on routes from Yantian, Nansha, Xiamen, and Hai Phong to Los Angeles, and from Pipavav, Salalah and East Africa to Newark, spokesperson Katherine Mosquera said. Once unloaded from the vessel, the cargo is put into a peel-off pile of cargo from a single shipper and so is more efficiently sent to its destination. In New York-New Jersey, APM Terminals operates a peel-off pile program.

John Atkins, president of Global Container Terminals USA, owner of GCT Bayonne and GCT NYCT, said the New York terminal in the past developed a block stowage system with one carrier that stowed apparel containers together so that they would be the first off the vessel and could be loaded on the train and be on the way to the destination that night.

The concept has since become more attractive as New York and other ports focus on boosting intermodal cargo and enhancing flow, Atkins said. “We are working extensively with one of our customers, and we have seen some success, and we are talking with additional customers about the same things,” he said.

New York-New Jersey officials in the past have said they are looking to increase the percentage of port cargo that goes by rail from 15 to 20 percent. About 35 percent of the Port of Virginia’s cargo goes by rail, compared with 20 percent in Savannah, and 22 percent in the Port of Charleston.

Global Shipping Outlook: A Sneak Peek at 2021
Port Performance North America: Managing Cargo Flow During a Pandemic — and Beyond
END_OF_DOCUMENT_TOKEN_TO_BE_REPLACED