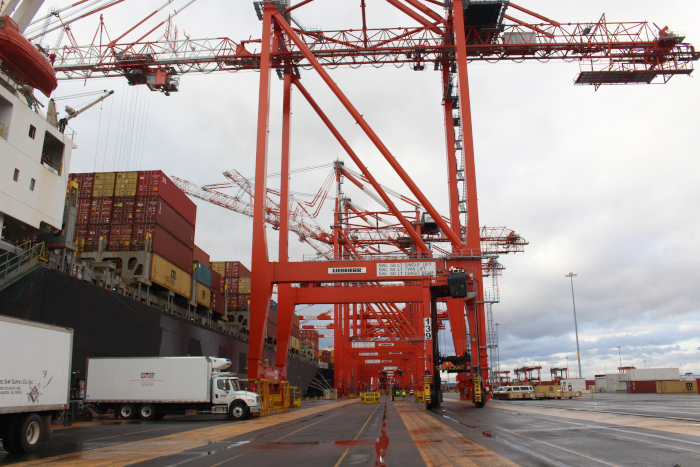 Correction: An earlier version of this story incorrectly stated that the Port Authority of New York and New Jersey predicted an increase in cargo volumes, rather than an increase in truck moves. JOC apologizes for the error.

The Port of New York and New Jersey is moving to head off a cargo backlog in marine terminals and warehouses in April and May as Chinese import volumes rebound from the trough created by blank sailings linked to China’s recent production slowdown.

The Port Authority of New York and New Jersey (PANYNJ) says the number of truck moves through the port could increase by up to 20 percent later this spring from present levels as imports from China begin to recover after the reopening of Chinese factories that had been shut in February due to the coronavirus disease 2019 (COVID-19). The authority said it’s unclear at present how much that would increase cargo volume by.

Those rising cargo volumes could potentially overwhelm warehouses and distribution centers and back up marine terminals amid the widespread lockdown in place as officials attempt to curb the spread of coronavirus in the New York metropolitan area. Containment measures have frozen most consumer activity, leaving only essentials — food, medical supplies, and certain other consumer goods — to be distributed to stores.

Most existing inventory won’t leave warehouses and distribution centers because the stores that sell non-essential goods are closed, said Bethan Rooney, deputy port director for (PANYNJ). Rooney said PANYNJ is talking to warehouse owners and operators to gauge their vacant capacity and is looking at options for how different parts of the supply chain can adapt to handle the excess cargo. That could include finding additional space, but the port will first determine how much is needed before deciding who should secure the space, or where it would be, she said.

“It goes to reason that there's going to be a problem because of that kink in the hose,” Rooney said. “So how long can they handle it? At what point do the warehouses just get to the point where they cry mercy and they can't take any more cargo from the port?”

For the port and its shipper customers, a severe shortage of storage capacity could lead to chassis and empty container shortages and potential cargo delays. The concerns in the already tight New Jersey industrial real estate market reflect worries among many ports about supply chain disruptions due to the sudden surge in Chinese imports after weeks of low volumes due to blank sailings.

Steve Schulein, vice president of drayage and industry relations for New Jersey-based National Retail Systems, said the logistics provider is already seeing the impact of the state-mandated store closures. While volumes at present are slow enough that the company has reduced its daily hiring, cargo is already collecting at company yards because it’s not moving to stores, he said. That is not a problem at present, but it could become so if the closures continue, he said.

“Eventually what’s going to happen is that things are going to start backing up on the land side, because if you can’t deliver your freight then people like ourselves, truckers, warehousemen, drayage carriers, are going to have to find a place to put the goods until things get back to normal again,” Schulein said. That could also create equipment shortages if truckers and shippers are forced to store goods in containers on trailers, he said.

The port authority on March 13 said it expects port volumes to be 30 percent lower in March than the same month a year ago due to the 12 blank sailings expected to affect the port during the month. The port is expected to see a total of about 20 blank sailings between February and April due to the Chinese New Year celebrations, which closed factories from Jan. 25 to Feb. 8, and the coronavirus, which extended those closures for several weeks, according to container shipping analyst Sea-Intelligence Maritime Consulting.

The rise in cargo volumes as shipping schedules return to normal will heighten the existing space pressure of a growing port in a large consumer market.

Jim Coyle, president of Gateway Warehouse Association, which represents warehouse owners and operators in the port region, said area warehouses already have little spare storage capacity due to the steady demand from e-commerce suppliers that want to be close to the New York market. The warehouses also struggle to find workers, which would be an issue if the volume of cargo handled by warehouses increases, he said.

The vacancy rate for warehouse space in the port and surrounding towns fell to 2.5 percent in the fourth quarter of 2019, from about 4 percent a year earlier, according to commercial real estate services firm Cushman & Wakefield. The rent for warehouse and distribution space in the port increased 29 percent to $10.16 per square foot in the fourth quarter of 2019, compared with the same period in 2018, according to Cushman and Wakefield.

Imports through New York-New Jersey grew just 0.5 percent to 622,731 loaded TEU in January and February compared with the same two-month period in 2019, and were up 1.6 percent for all of 2019, according to PIERS, a sister company of JOC.com within IHS Markit.