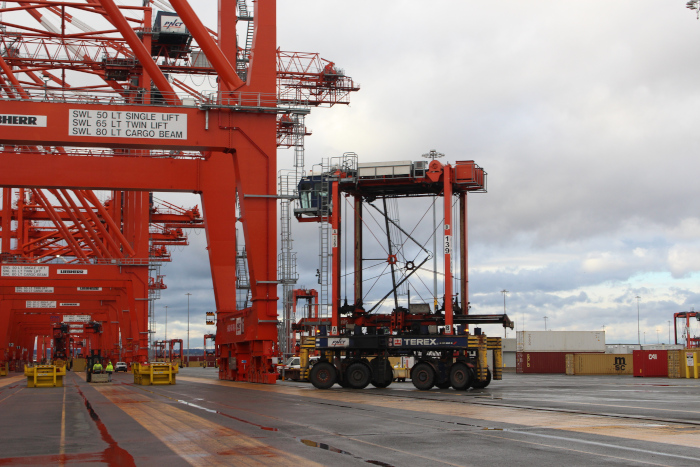 The Port Authority of New York and New Jersey expects cargo volumes to decline in February and March due to the impact of the coronavirus on Chinese production. Photo credit: Hugh R. Morley.

With at least 12 blank sailings linked to the coronavirus disease 2019 (COVID-19) in the next two months, the Port of New York and New Jersey expects cargo volumes to drop in the first quarter but experience a “sharp rebound” in April.

The port already has firm confirmation of 10 blank sailings in March, with the possibility of three more, and two additional blankings in April, Sam Ruda, port director for the Port Authority of New York and New Jersey (PANYNJ), told JOC.com. A port official said all of the blank sailings cited were due to the coronavirus. Cargo volumes into the port could be further diminished on ships that do arrive from China, he said.

“There will be reductions in cargo volume on existing vessel services attributable to the virus and the impacts it is having on China factory output,” Ruda said. China accounts for 32 percent of all imports into the port, by far the most of any single country, authority figures show.

Ruda added that the port is preparing for a rebound in April, with higher-than-usual cargo volumes. “This remains a very fluid situation and we are working very closely with our terminal operating partners to plan accordingly,” he said, adding that the port is preparing for a “sharp rebound in cargo volume once the situation with the virus abates.” A port official said the authority is holding regular discussions with terminal operators to gauge the impact of the coronavirus-related volume declines, and the impact on the port’s operations.

If the port sees the same number of vessels in March as the 179 handled in March 2019, 13 blank sailings would equal about 7.2 percent of the vessel calls, according to PANYNJ figures. The percentage of cargo volume lost in the blank sailings could be higher, however, because the largest vessels calling at the port are generally on Asian routes. The port is working to get a closer understanding of the volumes on the canceled services, and how that may affect April volumes, Ruda said.

NY-NJ is the latest US port to report or forecast cargo declines due to the impact of factory closures in China related to the coronavirus outbreak. Port officials in Los Angeles and Long Beach, for example, have forecast a 12 to 15 percent decline in container volume in the first quarter. Virginia Port Authority estimates that the cargo lost in February, March, and April due to the outbreak will total 44,000 containers, which would equal a decline of 11 percent over the three months. The South Carolina Ports Authority expects a 15 percent decline in March and April, and a rebound in May and June.

New York-New Jersey cargo volumes declined 2.5 percent to 434,476 loaded TEU in January compared with the same month in 2019, driven by a 1.5 percent drop in imports, according to port authority figures. However, PANYNJ spokesperson Steve Coleman said the port doesn’t believe the drop was due to the impact of the coronavirus on volume out of China, but rather the fact that January 2019 figures were inflated by a surge in imports as shippers sought to beat expected tariff increases.