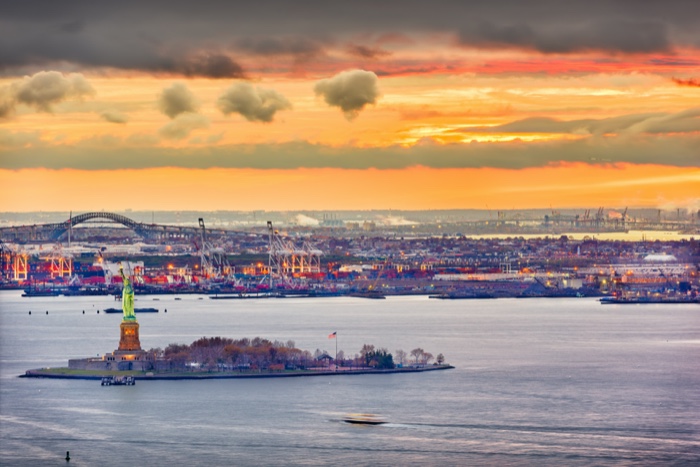 NYSA, the ILA, port employers, and other groups began in March to share COVID-19 information and coordinate a strategy, amid varying government orders across two states. Photo credit: Shutterstock.com.

Port of New York and New Jersey leaders are asking state and federal governments to help the port weather container volume declines and extra costs to keep workers safe and cargo flowing during the COVID-19 pandemic.

Congressional representatives on Wednesday from New York and New Jersey sent a letter to House and Senate leaders in support of $3 billion in financial aid for the Port Authority of New York and New Jersey (PANYNJ), which also operates area airports, the PATH passenger rail system, and interstate bridges and tunnels. At the port authority’s board meeting May 21, executive director Richard Cotton said the “unprecedented low levels” of passenger and cargo volumes across all facilities are expected to affect revenue over the next two years. “The collapse of those revenue lines is what has led us to seek federal help,” he added.

Cargo volumes flowing through US ports are expected to fall 20 to 30 percent year over year in the first half of 2020, according to the American Association of Port Authorities (AAPA). Laden container import and export volume at the largest East Coast port fell 1.3 percent during the first quarter, according to PIERS, a sister product of JOC.com within IHS Markit. Total US imports at the port in April dropped 4.1 percent, pulling year-to-date volumes down 0.8 percent compared with the same four-month period in 2019.

What form that help takes, however, as well as how quickly it may come, remains unclear. The $2.3 trillion Coronavirus Aid, Relief, and Economic Security (CARES) Act does not specify self-funding, multi-state agencies as eligible for direct aid. But the authority may find some relief under the bond purchasing programs established under CARES and the Federal Reserve.

Port employers are looking for help during the pandemic, as well. The New York Shipping Association (NYSA), which represents terminals and ocean carriers, also asked federal and state legislators for aid to cover the ongoing costs of safety measures aimed at keeping the terminals open.

The safety measures “create extraordinary costs which, in the absence of state and federal assistance, will likely have negative impacts on port operations in the near future,” wrote John Nardi, president of NYSA.

NYSA is spending about $60,000 weekly on daily temperature checks. Marine terminals and the International Longshoremen’s Association (ILA) handed out over 200,000 masks and barrels of hand sanitizer.

“It’s not easy to absorb those costs because the volumes are down,” said Jon Poelma, managing director at APM Terminals Port Elizabeth. He said the terminals “are actively pursuing all avenues in federal grant funding and trying to claw back expenses related to these measures.”

Terminals also had to change operations with only two workers allowed to use any piece of machinery daily and spread work throughout the day to reduce density. Most office employees are now working from home.

The safety measures prevented a wider outbreak among the port’s 3,500 longshore workers, Nardi said. During its March and April peak, Coronavirus impacted just over 320 longshore workers. By mid-May, about 120 longshore workers either tested positive for the virus or were directed by their employers to self-quarantine, Nardi told JOC.com

“For every positive COVID-19 case, up to 10 people in close contact could be sent to self-quarantine,” Nardi said. “If that were to happen, we’re going to run through the workforce in no time. It's not like everyone can do the same job.”

Two longshore workers were identified as having died from COVID-19. NYSA, the ILA, port employers, and other groups began in March to share COVID-19 information and coordinate a strategy, amid varying government orders across two states. Poelma’s own experience in protecting the workforce at APM reflects the early uncertainty about how to stem an outbreak.

“We pulled out all sorts of stops to get protective gear,” he said. “We were one of the first buying hand sanitizer from a distillery.”

Aside from the costs of safety measures, NYSA and ILA also had to tackle how to pay longshore workers that were not able to work due to illness or quarantine. Longshore workers generally do not receive sick pay and disability benefits are only for injuries directly related to their job.

In their place, NYSA and the United States Maritime Alliance, which administers the master labor contract for East and Gulf Coast ports, provided an emergency fund to supplement unemployment and temporary disability benefits.

Nardi said about 900 longshore workers are not working, mostly those involved in the port’s cruise ship and car carrier terminals.

While the pandemic appears to be abating in the region, Nardi expects many of the current safety measures will have to remain in place for the foreseeable future.

“I don’t know what will remain in place after this passes, but we will be doing things like temperature checks through June,” Nardi said. “When can we get back to the manning levels that we had before? I would be hesitant to guess.”