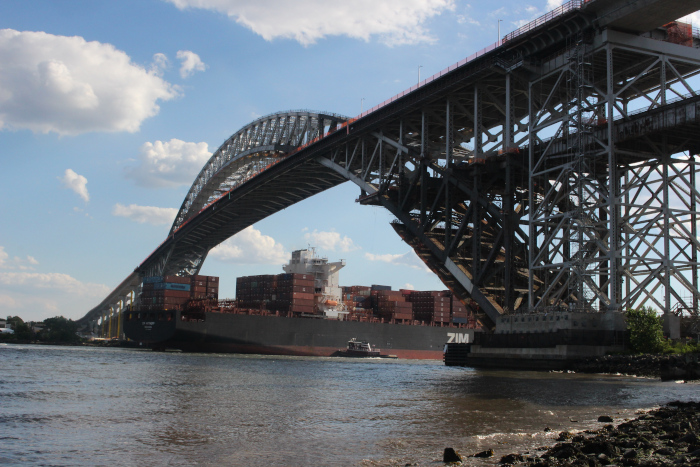 The Port of New York and New Jersey raised the Bayonne Bridge and dredged the Kill Van Kull to accommodate larger ships. A new master plan says the port will need to take additional actions as cargo volumes through it increase. Photo credit: Hugh R. Morley.

The Port of New York and New Jersey said it’s preparing for annual cargo volumes to more than double over the next 30 years, to at least 14.5 million loaded and unloaded TEU. The number of rail lifts, an indicator of the amount of cargo moving out of the region and into discretionary Midwest markets, will quadruple in the same period, according to a port master plan released Tuesday.

The growth — driven by an expected rise in regional population and the port’s own efforts to expand its share of discretionary cargo — will require NY-NJ to make more effective use of the footprint of current terminals, the report, called Port Master Plan 2050, says. It also suggests a new marine container terminal, with 200 acres of container handling space, could be needed; it would be the port’s seventh.

The master plan, compiled at the request of the Port Authority of New York and New Jersey (PANYNJ), estimates the port’s current operating capacity at 9 million loaded and unloaded TEU. The report expects the required capacity after 30 years to be between 11.5 million TEU, if the port experiences 2.1 percent annual average growth, and 17 million TEU, if cargo volumes grow at 3.4 percent a year.

“If we put an extensive effort on growing the discretionary market, that cargo that has a choice to come here or go to many other US ports, and is generally destined to the Midwest,” said Beth Rooney, deputy port director for the authority. “[If] we put tremendous effort into growing that business, we could be upwards of 17 million TEU.”

In drafting its response, the port is anticipating future volumes midway between the two projections, or 14.5 million TEU, she said. Cargo volumes through the port have increased 46 percent from 2005 to 2018, to 5.1 million loaded TEU, according to PIERS, a sister company of JOC.com within IHS Markit.

The master plan, which was two years in the making, reflects the port’s effort to handle the uncertainty facing many ports due to growing cargo volumes, increasing vessel sizes, rapidly evolving technological options, and fierce competition between ports for cargo.

New York-New Jersey’s cargo volume increased 5 percent from January to April this year, to 1.685 million loaded TEU, PIERS figures show. That made it the second-busiest port in the nation, edging out Long Beach.

Port officials say they believe larger vessels, and their growing tendency to make New York-New Jersey the first port of call, will boost port cargo volumes. And they hope to boost rail cargo — which is mainly discretionary — to about 1 million lifts in 2023. To that goal, the port has steadily improved its rail facilities, known as ExpressRail, with on- or near-dock rail now available at the five largest terminals — APM Terminals, Port Newark Container Terminals (PNCT), Maher Terminals, GCT Bayonne, and GCT New York.

The master plan outlines a scenario in which the port expects to be able to expand the current 9 million TEU capacity to 13 million TEU by improving the use of existing facilities for the next 10 to 12 years. But around that point, port officials and stakeholders will have to make a major decision about where to add 200 acres of additional container handling space, and possibly a new terminal, and where to put it, the report says.

The initial capacity increase will come from a variety of factors, including road improvements, improved efficiency through better data collection, an enhanced port-wide communications system and power network, and better highway connectivity outside the port. The port could possibly add a vessel berth in Newark, the plan says. The addition of new rail tracks in ExpressRail terminals, and several rail projects outside the port, will increase the rail capacity, the master plan says.

The plan also confirms that Red Hook Terminals, which Governor Andrew Cuomo in January 2018 suggested should be moved to a different location, will remain where it is, and is part of the port’s future. The plan also said the authority should seek to build up a second Brooklyn terminal, South Brooklyn Marine Terminal (SBMT), the site to which Cuomo had suggested Red Hook be moved.

In about 15 years, the port’s steady growth will force it to decide whether to expand inside or outside the Kill Van Kull. About 90 percent of all containerized cargo coming to or from the port must pass through the channel to reach four of the port’s six terminals. Although the Kill Van Kull can handle vessels of up to 18,000 TEU, the US Coast Guard and other harbor stakeholders recommended a series of limitations to improve safety.

“Looking ahead to the next 30 years, the PMP [Port Master Plan] process has revealed the heightened criticality of the Kill Van Kull to the port’s ability to handle increasing throughput and increasing vessel size,” the report said.

The limitations include a rule that only one mega-vessel can traverse the channel at any time, and that ships arrive and depart an hour before or after slack water — high or low tide. Ships also can move through the channel at no more than five knots, compared with seven knots in the past, because they displace so much water, which can have a larger impact on the side of the channel.

The US Army Corps of Engineers is conducting a study into whether the conditions that require the limitations can be alleviated by further dredging. If not, the port would consider expanding outside the Kill Van Kull, which is where GCT Bayonne and Red Hook Terminals are located. The plan does not offer any suggestions as to where the expansion should take place.