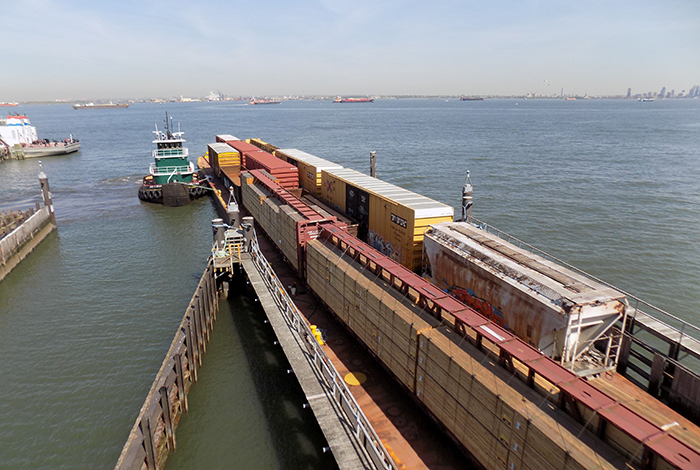 With most Port of New York and New Jersey cargo operations concentrated in New Jersey, getting shipments to some parts of New York City can be a challenge.

The Port of New York and New Jersey is studying two projects aimed at improving efficiency and cutting traffic and pollution by moving rail freight across the harbor into New York City and Long Island through a new tunnel or an expanded railcar-on-barge program that could eventually move containers.

At present, rail freight that is headed from New Jersey to the Long Island land mass, which includes the Brooklyn and Queens boroughs of New York City, must either take a tunnel under the Hudson River into Manhattan, or go over the George Washington Bridge or the Verrazano-Narrows Bridge. All are routes that are routinely highly congested, and can take hours to complete on a bad day.

Supporters say the proposed two-track tunnel — with capacity to take double-stacked trains — would create the first rail-link between the city and the national rail network. It would start at an existing rail yard in the Greenville area of Jersey City, New Jersey, and go under New York Harbor, surfacing in Brooklyn, New York, to connect with existing rail infrastructure.

The second project would expand an existing program in which railcars full of cargo are placed on a barge and floated across the harbor to Brooklyn, where they are unloaded and re-assembled into trains before moving on to their destination. At present, no-containerized cargo is carried on the service, and all goods are domestic. However, the study will look at the feasibility of expanding it to include containerized imports.

The proposals are part of the Port Authority of New York and New Jersey’s effort to remove trucks from area streets and curb congestion and pollution through methods that include an old-truck replacement program and a program to move containers across the harbor by barge.

The cross-harbor proposals could help smooth the movement of rail-bound cargo in and out of the heart of the nation’s largest consumer market as the port seeks to secure a greater share of discretionary cargo headed by rail for the Midwest that is expected to come with the arrival of increasingly larger ships in the port.

New York-New Jersey has lost East Coast market share in recent years, especially of trans-Pacific cargo. The port’s share of Asian imports fell from about 43 percent of East Coast volumes in 2010 to 36 percent last year, and 34.5 percent in the first quarter of 2017.

The port authority two weeks ago issued a request for proposal seeking a consultant to do planning, environmental and engineering work on the second phase of an “environmental review” of the projects, which are intended to improve the port’s freight connection with Brooklyn and other parts of New York.

When the study is completed, an estimated three years after a consultant is hired, and its conclusions are opened to public comment, the US Department of Transportation (DOT) will decide whether one of the projects, both, or neither should be pursued.

The port authority has committed up to $35 million for the study and has up to another $35 million available for further design and engineering. Projected capital costs for the two projects in the past have ranged from $100 million to $600 million for barge alternatives and $7 billion to $11 billion for a tunnel. The latest study is expected to revise that cost.

Congressman Jerrold Nadler, who said he has worked on getting the tunnel built for 30 years, called the study an “important milestone” in its progress that would put to use the area’s “underutilized rail network.”

“It will change the way we move goods throughout our region for the better, with economic, environmental, health, safety, and cost-saving benefits for millions of people,” said Nadler, a Democrat whose district includes Manhattan and Brooklyn.

The railcar-on-barge proposal would expand an existing project, which began 2008 with the purchase of an existing railcar float system, that moves freight between the Greenville Yard and a Brooklyn yard. The program at present moves 4,000 cars a year, and the authority is in the process of increasing the capacity to 24,000 cars a year.

The expansion, with about $130 million in federal and port authority money, would include the construction of a new transfer bridge to put the trains on the barge in Jersey City. It has already paid for three new locomotives, which are used to put railcars on and off the barge. The funding also would finance the construction of two new “car floats” or barges that can carry 18 railcars, instead of the 14 carried at present. The barges, which are expected to be ready early next year, will replace the single barge used at present.

Each railcar is equivalent to about three or four truckloads of goods, and the goal in the soon-to-be started study is to look at the feasibility of more than doubling the volume of cars that could be taken, to between 50,000 and 70,000 cars, said Matt Masters, general manager of the port rail program.

“We are quite efficient at this,” Masters said. “A train gets delivered to us, and we can take that train, break it down and put it onto a railcar barge in about 20 minutes. And it’s about a 45 minute float by tug across the harbor. And in another 20 minutes we can have that railcar float unloaded and shoved to our interchange partner on the other side.”