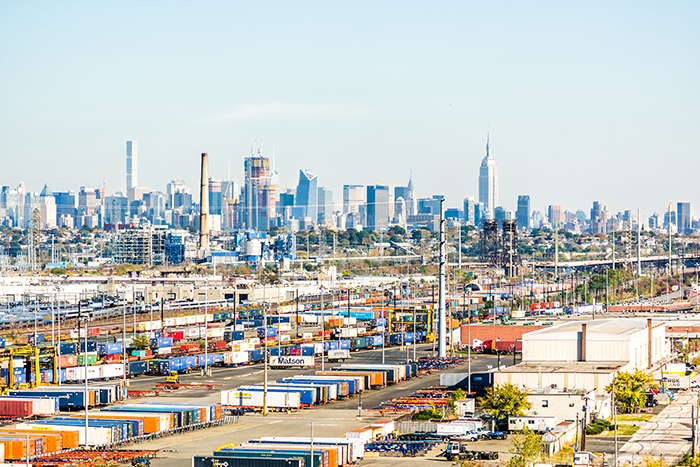 Only 2 percent of the approximately 60 warehouses responding to a survey by the Port Authority of New York and New Jersey (PANYNJ) said they will need more space to handle an influx of cargo expected in April and May. Photo credit: Andriy Blokhin/Shutterstock.com.

The Port Authority of New York and New Jersey (PANYNJ) says it is no longer concerned about a potential container bottleneck at marine terminals in April and May after surveying warehouse operators supporting the largest East Coast gateway. In case storage gets scarce, the port authority is working with operators to identify available warehousing in the region.

Expectations of a rebound in Asia imports following extended closures of Chinese factories due to the coronavirus disease 2019 (COVID-19), coupled with the potential for more importers failing to pick up containers due to warehouse closures or storage constraints, is putting supply chain stakeholders on alert across the United States.

In New York and New Jersey, only 2 percent of the approximately 60 area warehouse operators responding to the survey by the port authority said they will need more warehouse space to handle volumes they anticipate receiving in a four- to six-week period beginning at the start of April, Sam Ruda, PANYNJ port director, and Beth Rooney, deputy port director, told JOC.com.

While inbound cargo from China is expected to rise, volume on other routes is expected to be lower than previously projected due to reduced demand for consumer goods after businesses closed to help stop the spread of COVID-19, according to Ruda and Rooney. Ocean carriers in recent weeks have scheduled scores of new blank sailings as many retailers and manufacturers cancel purchase orders at factories in Asia owing to reduced consumer demand.

PANYNJ officials in mid-March said they expected port volumes to be down about 30 percent that month as a result of blank sailings. About 20 were expected in March and April, and four are still to come, port officials said.

In conducting its survey, PANYNJ reached out to about 100 shipper- and third-party-owned warehouses through the Gateway Warehouse Association and area chambers of commerce, and about 60 percent replied to the survey, Rooney said. Only 10 percent said they do not have enough space inside their warehouses, of which half said they had enough additional space in exterior yards to accommodate any overflow cargo.

Of the 5 percent that said they did not have enough space in the warehouse and yard to cope with expected cargo volumes, just over half said they had already made alternative arrangements, Rooney said. That left only about 2 percent who said they would benefit from help looking for additional space.

Warehouse space is generally scarce around the port and in surrounding towns, with vacancy rates at 2.5 percent in the fourth quarter of 2019, down from 4 percent a year earlier, according to Cushman & Wakefield, a commercial real estate firm. About 50 warehouses said they had extra space, totaling about  2 million square feet, according to Rooney, who added the authority will continue to monitor the need for space.

Still, given the unique and unprecedented nature of the COVID-19 pandemic, port area warehouses are watching closely to make sure they have the space to handle whatever cargo arrives.

Jamie Overley, CEO of East Coast Warehouse & Distribution, said company warehouses are not full at present, but he expects them to be near capacity by the end of May.

“This is based upon our existing customer needs and projected inbound capacity,” Overley said. “We have seen lower inventory turns from our customers as retail, distributor, and consumer demand slow. We are reserving our space for existing customers and are very selective about accepting short-term overflow opportunities where we have seen an increase in requests in the market.”

This is a “fluid and dynamic situation,” he said. “Customers continue to plan for a seasonal peak, albeit a muted one.”