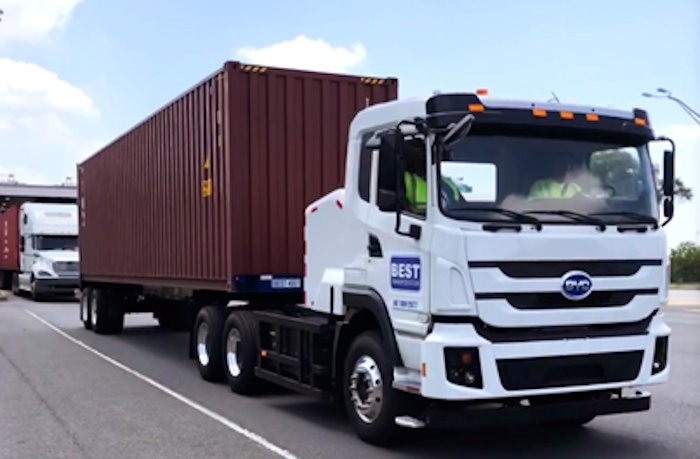 A trucker in the Port of New York and New Jersey has completed the port’s first delivery by a zero-emission electric truck as ports across the country — most notably those in California — try to reduce pollution while maintaining cargo flow.

Best Transportation delivered a 14,000-pound container from its Port Newark warehouse to Costco Wholesale in Monroe, New Jersey, about 36 miles away, on July 19 with a second-generation  battery electric drayage truck, the Port Authority of New York and New Jersey said.

The vehicle, the only commercially available zero-emission drayage truck, is powered by a battery pack that enables the truck to travel 125 miles per charge, with a cab that can carry a combined weight of 105,000 pounds, the port authority said.

The delivery is the latest step in the port’s effort to reduce greenhouse gas emissions, a key part of which is a program to replace aging trucks with newer, cleaner-burning vehicles. Upgrades to the program this year meant that as of July 1, all trucks added to the port’s truck registry had to meet the US Environmental Protection Agency’s (EPA's) road emission standard for engine model year 2010. From Aug. 1, 2020, no truck with a 1997 or older engine will be able to enter the port.

The port is also promoting the increased use of trains and working on a plan to encourage the use of barges on federal marine highways to cut the number of truck trips on area roads.

The strictest environmental regulations in the nation are in California, where the Clean Truck program in the ports of Long Beach and Los Angeles calls for zero truck emissions by 2035, with the main options being the use of trucks powered by clean diesel, natural gas, and electric power. A report released by the Clean Air Action Plan (CAAP) concluded that despite certain limitations, battery-powered electric and natural gas-powered trucks are furthest along in their development in terms of meeting the ports’ short-term goals through 2021.

The report found battery-electric trucks outperformed diesel trucks in terms of power, torque, and gradeability, but at present are limited as to vehicle range, weight, and recharging times.