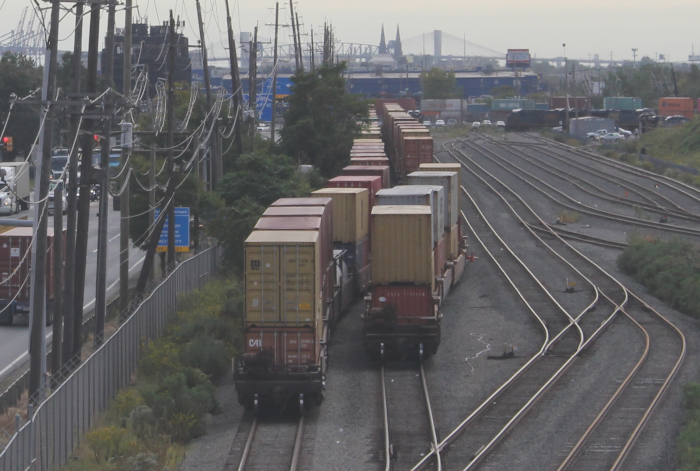 The Port Authority of New York and New Jersey and Conrail are working on ways to improve fluidity on rail tracks outside the port terminals now that the five biggest port terminals have rail links. Photo credit: Hugh R. Morley.

The Port of New York and New Jersey is studying a plan to remove a bottleneck at its rail terminal in Elizabeth that prevents more than one train from entering or leaving the terminal at one time, as it looks to increase rail cargo volumes by 40 percent in the next five years while improving fluidity.

The so-called Southern Connection, a proposed two-mile stretch of track, would enable a train to leave the ExpressRail terminal in Elizabeth, New Jersey — which is shared by Maher Terminals and APM Terminals — and head south immediately, rather than take the present route that requires trains to first head north before circling back south.

The additional track would also resolve the current situation in which only one train at a time can use the terminal entrance, a limitation that sporadically disrupts the rail yard at nearby Port Newark Container Terminal (PNCT), which shares a common marshalling yard.

The Southern Connection proposal, which has yet to be funded, is one of several projects under discussion, under way, or completed that aim to improve rail fluidity in and around the port while boosting the use of rail, especially for discretionary cargo headed to or from the Midwest.

Improving rail fluidity has taken on renewed importance with the completion two weeks ago of the second and final phase of the new $149 million rail terminal at GCT Bayonne. The opening of the terminal concluded a nearly three-decades long, $1 billion effort to bring rail to all of the four major terminals at the port — GCT, Maher Terminals, PNCT, and APM Terminals — as well as to the smaller GCT New York Terminal in Staten Island.

Now the port is looking to increase the annual volume of cargo that departs or arrives by rail — from 640,000 containers in 2018 to 900,000 within five years. The port conducted 13.8 percent more rail lifts in 2018 than in 2017, and the number increased by 8.6 percent, to 220,044 lifts, in the first four months of this year, port authority figures show. Longer term, the port wants to grow the share of port cargo that goes by rail from 15 percent to about 20 percent.

In line with that goal, the authority, working in partnership with Conrail, is focused on smaller projects that improve fluidity on the freight rail lines and remove glitches that create congestion and hinder cargo movements, Matt Masters, general manager of the port authority’s port rail program said.

“We can get the boxes on and off the ship, and onto a rail car,” he said. “But how do we move them rapidly if we've got a constrained service area just off the port?”

Masters said the Southern Connection project, if it goes ahead, could be a “game changer,” because it would increase the flexibility of the Newark and Elizabeth terminals to load and unload trains. At the moment, with one-way traffic, the PNCT terminal can be disrupted for three or four hours while a 10,000 foot or more train is built, he said. “While that is happening, the facility can't continue to operate and load or unload rail cars,” he said.

The bottleneck also adds time to the freight trip, as the train goes north first and circles back, he noted. Preliminary engineering work under way on the project should determine whether it is feasible, and where it should go in the authority’s future rail priority list, Masters said.

Other projects that aim to improve rail fluidity around the port include a third track completed last year along the National Docks freight rail line, one of the main arteries through the area, and a 9,000-foot siding completed this year. They include two 5,200-foot sidings under construction, which are scheduled to be completed this year and provide track on which trains can stop or be built without disrupting the main lines, Masters said.

Another project would construct two 9,600-foot tracks, known as the Waverly Loop. The project, which is due to start this year with half the $26 million cost funded by the state of New Jersey and the other half by the port authority, will be completed by 2021. The two tracks will enable a train heading out of the GCT Bayonne terminal to do so without having to stop and switch the locomotive from the front to the back, which causes rail congestion, said the port authority.