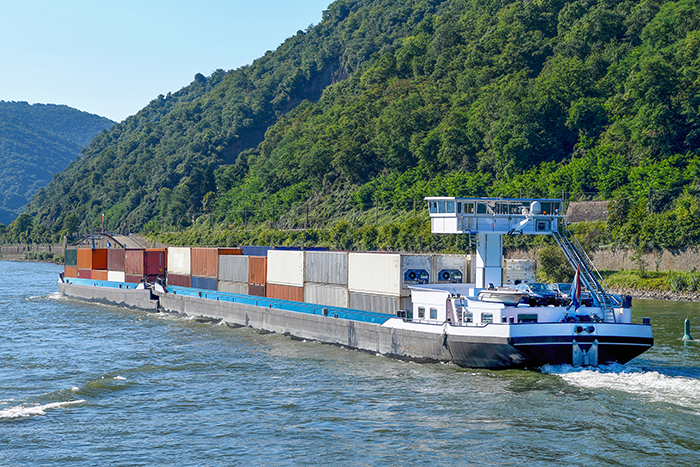 The Port of New York and New Jersey is looking at container-on-barge routes in an effort to reduce truck traffic in and around the port. Photo credit: Shutterstock.com.

The Port of New York and New Jersey has identified barge routes connecting to Portland, Maine, and Wilmington, Delaware, as the most likely to be able to support regular containerized cargo service this year, a move aimed at reducing truck traffic at the largest US East Coast port.

The North Atlantic Marine Highway Alliance studied a variety of routes in and out of New York-New Jersey, ranking them by factors such as infrastructure, interest from port authorities and vessel operators in bringing barge service to the area, and the size of the customer base that could be served.

The alliance’s preliminary ranking, with Portland and Wilmington at the top, also suggested that New York-New Jersey should expand its existing barge program, which moves containers back and forth between terminals in New Jersey and Red Hook Terminal in Brooklyn, Beth Rooney, assistant director of the port division of the Port Authority of New York and New Jersey, told JOC.com.

“There’s a lot of hearty discussion going on, [with] folks from Maine and Virginia participating,” Rooney said, adding that the group is looking to get at least one such service going by the end of the year. “There is a firm belief that the time has come for marine highways — in a sustainable [way], without cost subsidies — to be operational in the region.”

The city in July unveiled a $100 million plan that in part proposed the creation of an extensive network of barge routes running from the port’s main container terminals in New Jersey through city waterways. Separately, the city is also planning to open a new container and breakbulk terminal in Brooklyn to be served by barges. And in August, the US Maritime Administration’s (MarAd) Marine Highway program awarded $855,000 to a project that would link New York and New Jersey with the Port of Davisville, Rhode Island, with a twice-a-week barge service to carry containers and reduce traffic on the I-95 corridor.

Barge supporters envisage a future in which, as mainline ship sizes continue to increase, vessels stop at only one or two ports along the East Coast and containers are then shuttled to other ports by barge.

Cargo volumes through New York-New Jersey increased by 6.5 percent in 2018 over the year before, to 5.01 million loaded TEU, according to PIERS, a sister product to JOC.com within IHS Markit. The port authority expects growth of 3 to 4 percent in 2019 and volume to more than double to 12 million TEU by 2036. The barge route between New Jersey and Red Hook Container Terminal in Brooklyn and the company's Newark terminal handled about 40,000 containers in 2018, according to the port authority, which does not track the volume of containers moved by barge on other routes.

In perhaps the most prominent use of barges in New York-New Jersey at present, APM Terminals is currently using barges to help reduce the container backlog and rail dock dwell times at its Elizabeth terminal, which have been elevated since October due to a 26 percent increase in cargo in the fourth quarter over the previous quarter. Most recently, a barge on Feb. 28 took 350 containers from APM to the Port of Virginia, from where they were sent to destinations in the Midwest by rail via CSX Transportation.

The alliance, formed in October with port, industry, and government officials from Maryland to Maine, aims to reduce the regional supply chain’s reliance on trucks. Rooney said the committee is far from making a final determination, but once completed, the alliance ranking will determine where members “put the effort in terms of trying to develop BCO [beneficial cargo owner] and customer outreach.” It also will steer the alliance’s focus for infrastructure improvements and help shape grant applications to MarAd, she said.