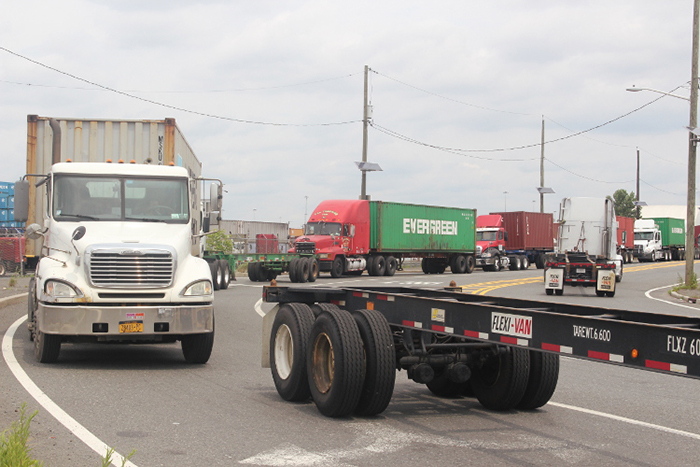 Trucks waiting to get into the APM Terminal in Elizabeth, New Jersey, in the aftermath of the cyber attack on the Maersk Group.

The entry gates at APM Terminal (APMT) in the Port of New York and New Jersey are operating at 100 percent capacity and the terminal expects to be running as normal by the end of the week, about three-and-a-half weeks after it was crippled by a cyber attack on parent Maersk Group.

Truckers said the truck lines and waiting time were down markedly on Tuesday from where they were last week, when truckers typically waited hours to enter. APMT officials said their main task is now to reduce the backlog of containers that built up when the terminal gates were closed for several days but continued to receive ships and new cargo.

“We will be back fully to normal operations by the end of the week,” said Richard Carthas, senior director of operations for the APM terminal at the largest port on the East Coast. “All the computers are up and running at all the gates.”

The attack on June 27 stripped Maersk’s operations globally of the ability to receive electronic bookings or communicate with customers, and severely impaired the APMT facility in Elizabeth, New Jersey, at the third-largest port in the nation. The attack knocked out the terminal’s computer, phone, and email systems, and the facility was closed for three days.

A week ago, Maersk said that although cargo bookings were being made again and terminals are functional, many processes were still being carried out manually and some terminals could not process certain cargo. On Wednesday, after continued improvement, the carrier told customers in a message on its website that despite the fact that “overall progress is being made, you may still encounter delays in response time in some locations. We assure you that we are clearing the final parts of the backlog while working hard to support your new business.”

In Elizabeth, the scale and unexpectedness of the attack plunged the terminal back into the pre-digital era. However, APM officials said that by working with the many stakeholders in the port community, they were able to get the operation up and running again.

When the terminal reopened, with much of the computer system still not functioning, employees conducted a large part of business with pen and paper. Slowly, however, the computer system has returned, and all of the gates have been computerized since last Wednesday, Carthas said.

On Monday, the Port Authority of New York and New Jersey shut down a large yard opposite the terminal that was opened immediately after the attack as a waiting area for trucks going into the terminal in order to reduce truck lines that at their peak stretched for more than a mile through the port.

Carthas said the terminal is now making 4,000 to 4,500 container moves a day, up from about 2,000 immediately after the attack, which has reduced the backlog of containers by 50 percent. The terminal, which was open on the past two Saturdays to meet trucker demand for containers, continues to close at 7 p.m., rather than the usual closing time of 3:30 p.m. The gates remain open until all truckers in line are served, Carthas said. Some truckers said they have finished at the terminal at 9 p.m. or 10 p.m.

“We process the last truck out of the gate no matter what time to ensure that there is service, to help the trucking community,” Carthas said. “Although it’s taking a little longer to get into the terminal up until this point, we are back to reduced queues. And given all of the challenges that the terminal has had to deal with, we have actually done quite well with our partners in the port to get to this level,” he added.

The terminal’s ship-side operation was affected far less than the gates, Carthas said. The terminal never “missed or turned away any vessel,” during its difficulties, and maintained a rate of 30 lifts an hour throughout, about the same as before the attack, he said.

Truckers, who complained of waiting for six or more hours during the terminal’s slowest post-attack period, said late last week and on Monday that, although the wait had been reduced, it still took longer — sometimes twice as long as a regular day — to get in and out of the terminal.

The port’s main trucking group, Association of Bi State Motor Carriers, last week issued a plan of action on how terminals should handle similar disasters in the future, and suggested that APMT should not have reopened until it was able to operate close to normal.

Rob Movshin, regional manager at Northeast ContainerPort Group, said the wait to get into the terminal is still “elevated,” but he added that “operationally they are a world from where they were, and they are almost back to where they expect to be operationally.”

“I am happy to hear that they think that they are going to back to normal at the end of the week. We are still dealing with old containers that arrived when the terminal was closed,” Movshin said. He added that the period in which the terminal gave “free time,” and did not charge for detention and demurrage, ends Wednesday, but he still has 100 boxes inside the terminal. He said he needs another five days of free time to get the containers out.

“We need the terminal to work with us to get through the situation,” he said. “We were patient while they were coming back online. And they need to help us out so we can get the freight out."