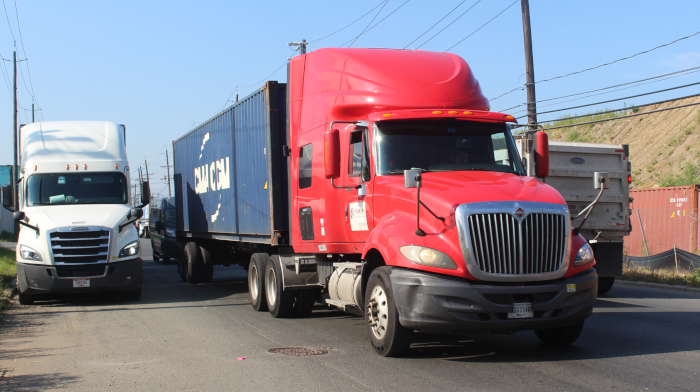 Truckers at the Port of New York and New Jersey say a law passing through the New Jersey legislature could harm the port drayage fleet by making it difficult for drivers to be owner-operators. Photo credit: Hugh R. Morley.

Trucking groups in the Port of New York and New Jersey are scrambling to gain an exemption from New Jersey legislation redefining whether a driver is an owner-operator or employee, with one group warning the state’s governor could sign the legislation into law by year-end.

Despite a vigorous campaign by truckers to highlight what they see as the potential harm to the port drayage fleet if the legislation is enacted, the bill continues to advance, and is up for a vote by a key committee of the New Jersey legislature on Thursday.

The bill, S-4204, pits New Jersey trucking companies — who say it could significantly weaken the port’s drayage fleet because drivers will work elsewhere rather than become employees — against Democratic lawmakers and the Teamsters, who say the bill offers important protections to worker rights. Independent workers can’t be unionized, and owner-operator truckers say that the Teamsters' real goal in driving the legislation is to organize port drivers.

Trucking groups note 77 percent of the 9,000 or so active drayage drivers that serve the port of NY-NJ are owner-operators. They say the law, by making it more difficult for them to retain that status, could severely deplete the size of the fleet, causing a shortage of truckers and disruption to cargo flow. The impact would be heightened by the fact that about 90 percent of the containers that go through the port are handled in New Jersey.

Gail Toth, executive director of the New Jersey Trucking Association (NJTA), said that although a state Assembly Committee made some small amendments to the legislation — which meant it had to go back to the Senate Labor Committee for a second vote — that will not be enough to ensure that any trucker who wants to be an independent contractor can remain so.

“We need a clear exemption, that is what we are pushing for,” she said. “I understand that there may be misclassification in some areas. But the majority of the people are not misclassified. And it’s like throwing everybody under the bus at the same time instead of just looking for the people who are really doing the wrong thing.”

She said she expects the bill to move ahead, and, given that Democratic Gov. Phil Murphy has said he will sign it, she believes the measure could become law soon after the middle of the month. With approval from the Senate Labor Committee, the bill could be on the governor’s desk after votes by the full Senate and Assembly. The impetus for action is heightened by the fact the current legislative term ends in January, and any bill not passed would have to start its passage again in the new session.

The classification bill — which would affect industries across the board, not just truckers — would redesign the existing three-prong test, known as the ABC test, that is used by state officials to determine whether a worker is an independent business or an employee whose employer should pay taxes and provide working conditions that reflect employee status. Both opponents and supporters say the bill is similar to California’s controversial AB5 bill that will take effect Jan. 1.

Industry analysts say that in response to AB5, drayage rates could rise in 2020 as trucking companies are likely to take one of three approaches — become a freight property broker, convert the drivers to employees, or do nothing and wait on the federal courts to make a decision on the ABC test.

New Jersey’s S4204 is the most high-profile of half a dozen bills being pushed by Democrats through the New Jersey legislature that toughen various aspects of the classification rules and laws. The package includes a bill that would increase penalties for worker misclassification to $250 for the first violation and $1,000 for each subsequent violation. Another bill would increase the liability for companies that hire workers who are misclassified as independent workers. A third bill would allow the state to post on its website the names of people and companies that are found to be in violation of any state wage, benefit, or tax law.

The NJTA, working with the Association of Bi-State Motor Carriers and the Port Drivers Association, has conducted a vigorous campaign to oppose the proposal, including information workshops, press statements, and an online petition that has so far attracted nearly 7,000 signatures in opposition to the legislation.

New Jersey Senate president Steve Sweeney, who sponsored the legislation, said on introducing the bill that it would provide workers with important workplace rights that are needed as employers increasingly seek to use temporary workers rather than employees, known as the “gig economy.” Misclassifying workers as independent contractors allows employers to evade workers' rights, avoid labor protections such as those that require minimum wage and overtime payments, and allow employees to take maternity, paternity, and family leave, he said. Employers can also avoid having to withhold New Jersey income taxes, Sweeney said.

Sweeney, in a statement released Nov. 22 after the state Assembly amended the bill, said it will protect workers' rights into the future.

“These bills will simply codify into law existing regulations so that future administrations can’t ignore, change, or discard the protections already in place to protect workers against the loss of basic rights by being misclassified,” he said.

The New Jersey bill reshapes the three prongs of the test that the worker must meet in order to be considered an independent business and shifts the burden of proof on the worker to demonstrate that he or she is not an employee. In the initial version of the bill, it removed the second prong and made it more difficult for a worker to show they are an independent business. The New Jersey Assembly Labor Committee on Nov. 18 amended the bill and re-inserted the second prong.