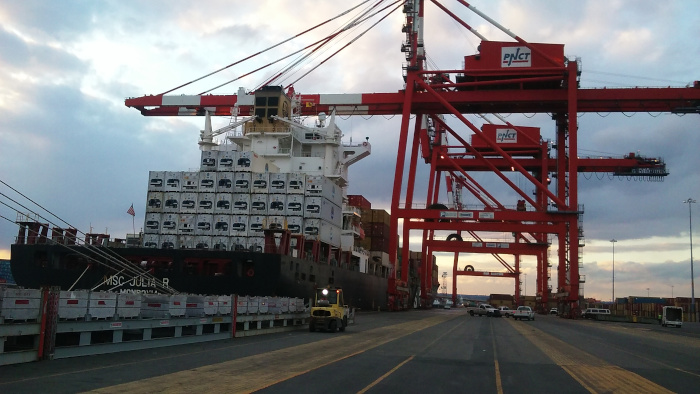 A federal appeals court is weighing whether New Jersey can transfer some functions away from the Waterfront Commission of New York Harbor, reducing its power in the Port of New York and New Jersey. Photo credit: Hugh R. Morley.

New Jersey lawmakers have filed a brief arguing in favor of a law that would effectively dismantle the watchdog agency that oversees hiring in the Port of New York and New Jersey. A federal judge's decision to block the law after it was challenged by the Waterfront Commission of the New York Harbor is currently under review in the US District Third Circuit Court of Appeals.

In papers filed with the court on Dec. 13, New Jersey Gov. Phil Murphy and the state’s Senate and Assembly argue the commission did not have the authority to file the initial lawsuit that resulted in the law being blocked. The compact that created the Waterfront Commission in 1953 requires the commission’s two-member board to approve actions such as the filing of a suit, and because that did not happen, the lawsuit is invalid, the lawmakers argue in the appeal.

The legal faceoff is the latest in a longstanding dispute over the role of the Waterfront Commission in the port. Critics of the commission — most prominently the New York Shipping Association (NYSA) and the International Longshoremen’s Association (ILA) — have long sought to diminish the commission’s power. They accuse the commission of overstepping its authority to combat crime on the docks and say the commission’s effort to oversee hiring in the port causes delays and disruption. The Waterfront Commission says its work is necessary, and the agency is merely carrying out its responsibility to fight racketeering that can push up costs and ensure fair hiring in the port, in part by promoting diversity.

The commission filed the lawsuit in opposition to a state law enacted in January 2018 that required key functions of the commission’s work — among them the power to conduct background checks and criminal investigations — to be transferred to the New Jersey State Police. The commission, similar to the port, straddles New York and New Jersey, although about 90 percent of the cargo through the port is now handled on in New Jersey.

The waterfront commission immediately filed suit opposing the law. And on May 30, US District Court Judge Susan D. Wigenton, sitting in Newark, overturned the law. Wigenton said in her ruling that it was clear the drafters of the compact between the two states, which was approved by Congress and signed by former president Dwight D. Eisenhower, did not intend to permit unilateral withdrawal of one state from the agreement.

The appeal also argues that the commission’s suit violates the Eleventh Amendment to the United States Constitution, which prohibits the federal courts from hearing certain lawsuits against state entities.

Wigenton’s ruling was supported by the Columbia River Gorge Commission, which filed a friend of the court brief arguing that if one party could leave the compact that created the Waterfront Commission, it could have implications for other bi-state agencies. The Columbia River Gorge Commission, which straddles the states of Oregon and Washington, said it feared a decision that allowed New Jersey to leave the Waterfront Commission “would suggest that interstate compacts are inherently impermanent and could be persuasive to other courts” to make a similar decision regarding bi-state commissions in other parts of the country.