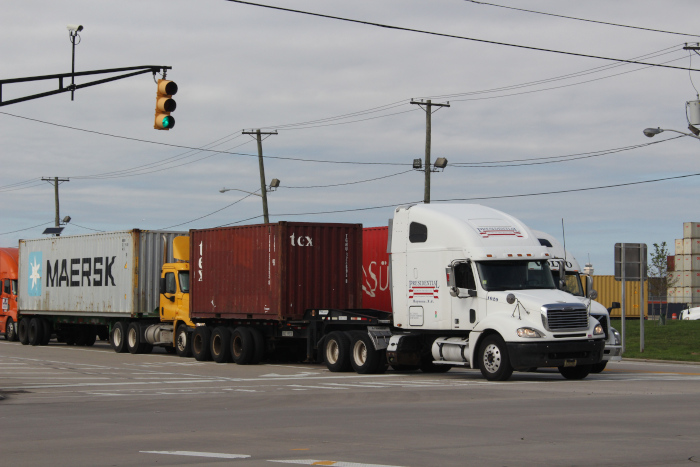 Truckers in the Port of New York and New Jersey fear legislation before New Jersey lawmakers could make it more difficult, and near impossible, for the owner-operator model of truck ownership to exist in the state if the legislation is passed. Photo credit: Hugh R. Morley.

New Jersey lawmakers on Monday will vote on two bills focused on the classification of owner-operator truckers and other workers as contractors or employees, including a bill that would add a penalty of up to $1,000 for violations by employers that misclassify workers.

One of the bills, S4230, would create a penalty of $250 for the first incident of an employer misclassifying an employee as an independent contractor, and $1,000 for each subsequent violation. The bill also allows state officials to levy a penalty equal to 5 percent of the employee’s earnings over the previous 12 months.

The second bill, S4227, would require employers to publicize to employees the fact that state law prohibits the misclassification of a worker as an independent contractor rather than an employee, and details of how to report an employer suspected of violating the law.

Both S4230 and S4227 will be heard by the state Senate Budget and Appropriations Committee on Monday. If approved by the committee, the bills will need a vote by the full Senate before they can land on the desk of Gov. Phil Murphy.

The bills are among seven pieces of legislation addressing different aspects of labor classification in the New Jersey legislature, including one that has stoked severe opposition among truckers in the Port of New York and New Jersey. That bill, S4204, would reshape the way all independent contractors are classified, and truckers fear that it would make it so hard for them to prove they are not employees that the owner-operator model would no longer be economically viable in New Jersey.

S4204, which is similar to the AB5 legislation that took effect in California on Jan. 1, needs approval by the Assembly Appropriations Committee and the full Assembly and Senate to go to the governor, but is not yet scheduled for a vote.

All of the legislative votes will have to take place by Jan. 13 for the bills to be enacted in this session. Any that are not put to a vote could be refiled in the new session, which begins Jan. 14. S4204 took about two months to work through the legislature to where it is today.

A fourth bill that is close to enactment, A5838, would allow the State Department of Labor to issue a stop-work order to any company that violates the state wage, benefit, and tax law, which includes the regulations for worker classification.