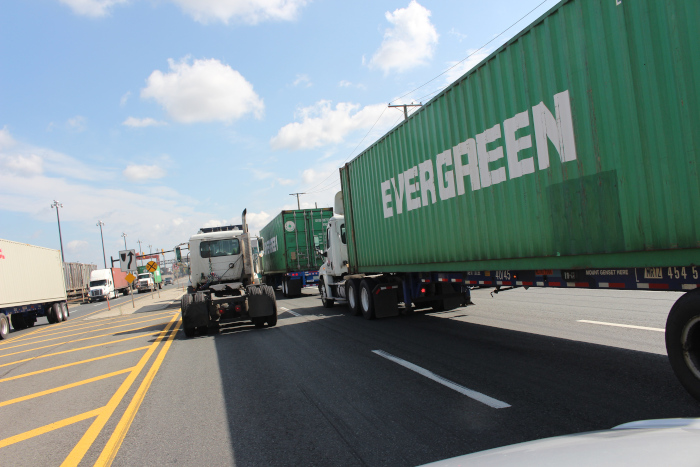 Truckers in the Port of New York and New Jersey fear that a proposed New Jersey law would make it tougher for owner-operators to prove that they are not employees. Photo credit: Hugh R. Morley.

New Jersey senators are set to begin debate Thursday on legislation that would push the state further into determining whether many truckers serving the Port of New York and New Jersey are independent contractors or employees.

The state Senate Labor Committee’s consideration of the legislation (S4204) comes as the container shipping industry grapples with the ramifications of AB5, a California bill signed into law Sept. 11 that supporters say addresses misclassification of drivers as independent contractors rather than employees.

But California truckers say the bill — because it makes it more difficult for a worker to be considered an owner-operator — will drive truckers to look for work in other states, and reduce the size of drayage fleets at the state’s ports.

The New Jersey bill, which was introduced Nov. 7, is scheduled to be heard by the Senate Labor Committee Thursday morning. The Association of Bi-State Motor Carriers, the largest drayage group in the East Coast’s biggest port, sent a letter to committee chairman Senator Fred Madden urging him to pull the bill from the committee’s agenda, saying it would “effectively destroy” the owner-operator model in the port.

The association said the New Jersey bill, which it called “virtually identical” to AB5, is “deeply flawed and if passed will cripple the intermodal transportation industry, sharply increasing the cost of living for all New Jersey residents.” About 85 percent of the port’s trucking fleet are owner-operators, and if they are forced to become employees “the tremendous cost increases will be shifted to shipping customers,” the association said in the letter.

The bill would shift the emphasis when a worker’s job classification is under scrutiny and assume that workers are employees unless they can show otherwise. To do that, they would have to show they are free from the control or direction of the contracting agent, that they perform a service that is outside the business of the agent, and that they customarily perform the occupation or trade that they are doing for the agent.

Under the proposed bill, the second prong is shifted so that the worker can no longer be considered exempt from the assumption that they are an employee just because the work is done outside the place of business that contracts them. The proposed law would allow exemption in the third prong only if the worker is in the same trade or occupation as the contracting company.

The legislation, which applies to all workers, not just truckers, follows a rule change by the New Jersey Department of Labor over the summer that truckers say made it more difficult for them to prove they are independent contractors, rather than employees. Under the change, the worker has to get a letter or document from the Internal Revenue Service (IRS) verifying they are an independent contractor. Truckers say securing the IRS proof is more burdensome than the old method, in which state officials did the test.