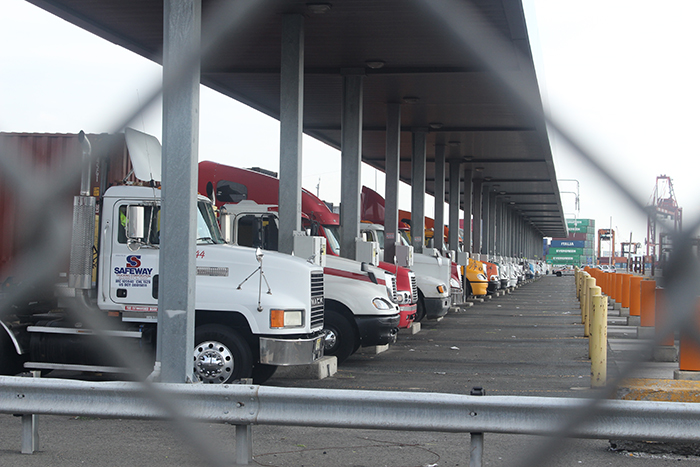 Trucks enter the gates of Maher Terminals in the Port of New York and New Jersey.

NEWARK, New Jersey — New York may be the city that never sleeps, but the four main terminals at its namesake port, the Port of New York and New Jersey, are closed by 7 p.m. That’s raising questions over whether gate hours will need to be extended to handle increased import surges brought by mega-ships, and whether the industry is ready to make that adjustment.

Evening or round-the-clock schedules are offered at other ports, most notably in Los Angeles and Long Beach, but also Oakland, and Seattle and Tacoma, with Houston planning to extend gate hours next year. But past initiatives to offer additional hours in New York-New Jersey, the East Coast’s largest port, haven’t lasted.

Some port users believe that the looming prospect of larger ships will force the nation’s third-largest port to adapt.

“I think we have no choice,” said Anthony Berritto, CEO of Newark, NJ-based trucking company SalSon Logistics, who said he hopes for some increase in the port’s gate times for the this year’s peak season. “I think it’s the right thing to do. It’s the only way you are going to reduce the dwell time at some of these terminals, and reduce the congestion.”

The question has emerged as new carrier alliances are set to take effect April 1, and — most significantly — the Bayonne Bridge’s clearance is raised later this year. Those developments are expected to help attract larger ships to New York-New Jersey. The bridge’s 151-foot elevation prevents ships larger than 10,000 twenty-foot-equivalent units (TEUs) from getting to three of the four main terminals. Depending on their design, even some 5,000-TEU ships can’t fit under the bridge.

Bigger ships are expected to mean that greater volumes of cargo must be unloaded in a shorter time, placing added stress on terminals. Extending gate hours is one way under discussion to relieve the pressure.

What’s clear is that it would take a concerted effort throughout the supply chain to make it happen. Less obvious is whether the port can corral the multitude of players needed to make extended gates work, even if the demand is there.

“It would require a sea change in the way the industry works in New York, New Jersey,” said Beth Rooney, assistant director of the Port Authority of New York and New Jersey’s port division. She added, however, that she believes it can be done if necessary.

Truckers, warehouse owners, and beneficial cargo owners (BCOs) that have to deal with the port’s slow turnaround times and sporadic bouts of congestion believe that extended hours will help them more speedily get boxes in and out of the port. They say trucks arriving and leaving in off-peak hours can avoid the road and highway congestion that comes with an urban port located just over 10 miles from the most populous city in the nation.

Opponents of extending port gate hours question the rationale, however. They have for years argued that there is little point in extending gate hours when warehouses are not open around the clock, and that trucks would have nowhere to take containers once they have picked them up.

Donald A. Pisano, president of American Coffee Corp., said he expects longer hours will prove necessary. But such a move would “need to be consistent throughout the port in order for the warehouses, distribution centers, and shipper facilities to alter their schedules to accommodate the extended time frames,” he said.

“What I have heard from them is that until extended gate hours are applied more broadly within the port, it does not make sense to alter their schedules since there are such inconsistencies with pickup locations, chassis availability, and returning empties, which can change without much notice,” he said.

“Today, when they [terminals] extend their hours, they don’t have an awful lot of demand and utilization of those extended hours,” she said. “So it’s very difficult for them to justify continuing to go through extraordinary expense for those extended hours.”

“One of the reasons why the extended hours have not been able to come to fruition here is simply because of the unavailability — or lack of availability — of warehouses and distribution centers that are operating 12, 16, 24 hours a day,” she said.

Although many big BCOs’ warehouses are open around the clock, many port customers handle fewer than 1,000 TEUs per year, and operate their warehouses only during daytime hours, Rooney said. A third uncertainty is whether US Customs and Border Control has enough agents assigned to the port to cover evening gate openings, she added.

Several truckers say warehouses they deal with are open around the clock.

“A lot of our customers, they are 24-7, so if the piers stayed open extended or longer hours, for us that would be fine,” said Beth Lilonsky, customer service manager at trucking company Allied Brothers Intermodal. She said Allied is “a big advocate” of longer terminal hours. Allied has its own 24-7 yard with round-the-clock security and surveillance, where cargo picked up late in the day can be left overnight and moved the next morning if a warehouse is not open.

Jeff Bader, head of the Association of Bi-State Motor Carriers, said that his trucking company, Golden Carriers, has not come across a problem with warehouses not being open. He said most trucking companies have a yard where containers can be stored temporarily. He said the association would like to see all terminals at the port open until 9 p.m.

Robert Fredman, director of global logistics at Big Lots, the Columbus, Ohio, retailer, said longer gate hours would greatly benefit his company’s Tremont, Pennsylvania, distribution center, which is open 24-7 and is served by the Port of New York and New Jersey 140 miles away.

“Our truck route would see enormous improvement, efficiency if they could do night gates,” he said at JOC’s 17th Annual TPM Conference this month.

Longer gate hours would help “avoid a lot of the traffic,” Fredman said. “We are in favor,” he said. But he added, “Obviously, though, there are costs associated with that for the terminal operators.”

Port officials and stakeholders have long discussed extending gate hours — and have launched at least two efforts to do so. But the subject has come up less in the last year or so, in part owing to a dip in laden volume.

The port handled about 6 percent more loaded imports and exports in January than in the same month in 2016, PIERS figures show. And volumes are expected to rise with the arrival of bigger ships, which are expected to make fewer stops and focus on larger ports, such as New York-New Jersey.

In preparation, port terminal operators have spent about $2 billion on upgrades, and the Port Authority of New York and New Jersey and federal government have spent $4.7 billion on dredging, rail access, and other projects, including raising the Bayonne Bridge.

In recent years, the port has struggled with sporadic bouts of congestion and delays, and turn times of more than two hours to get in and out of a terminal are not uncommon. In response, the port has established a Council on Port Performance to implement recommendations of an industry-wide task force.

The recommendations include a truck appointment program, a pilot of which was launched in December for three hours a day in one terminal. If successful, it is expected to be expanded to other terminals.

The port also is close to enacting a “gray” chassis pool that would provide truckers with access to any chassis in the port’s three competing pools. Both initiatives ranked among the top three most important suggestions by the members. The third priority was extended gate hours.

Longer gate hours have worked elsewhere. The Ports of Long Beach and Los Angeles in 2005 introduced its PierPass program, in which terminals opened longer hours and shippers would pay a traffic mitigation fee to move their cargo during daytime hours. The initiative was prompted by community complaints about congestion and pollution during the day, however, not industry demands for greater terminal efficiency.

PierPass remains in place, and many of the two ports’ 13 terminals open late gates, often from 6 p.m. to 3 a.m., four nights a week. Between 40 and 50 percent of the ports’ cargo is picked up in evening hours, much of it by larger BCOs that open their warehouses for two shifts a day. Smaller BCOs find it less costly to run only one daytime shift and pay the peak charge.

Oakland International Container Terminal has since last summer has been running extended gates Mondays through Thursdays, 6 p.m. to 3 a.m. And the ports of Seattle and Tacoma last year introduced between 60 and 90 hours per week of additional gate hours, with some after 5 p.m., during the peak season.

The Port of Houston says it expects to extend its gate hours to 11 p.m. at a date to be determined, possibly as early as the start of this year. The change would be part of a broad effort to prepare for growth in exports of containerized plastic resins.

In the Port of New York-New Jersey, Maher Terminals in 2003 extended its gate hours to midnight, eventually moving the closing time to 10 p.m., and then to 7 p.m., where it remains, due to lack of demand. Frank Capo, senior vice-president-commercial, said the 13 hours that the terminal is open — 6 a.m. to 7 p.m. — are sufficient, but that the terminal is ready to increase that figure if there is adequate demand.

“What we’ve been telling all the BCOs that work with us, come meet with us, is that we are very happy to extend those hours again, if need be,” Capo told the TPM Conference. “But I will say that in line with that, the entire supply chain needs to be on board. So we can operate all day and all night — but are there going to be enough trucks? Will there be enough chassis, or drivers, or customs [officers]?”

GCT Bayonne, one of the three other main terminals at the port, has tried to enhance gate options by opening on Sundays, with mixed success. The terminal started and then stopped them last year, but has offered Sunday hours fairly regularly in recent months.

GCT’s Sunday hours, and Maher Terminal’s after-5 p.m. hours, are eagerly used by East Coast Warehouse, which has 38 million square feet of refrigerated warehouse space in the heart of the Newark-Elizabeth port area. East Coast officials say off-peak gate hours are more efficient and enable drayage drivers to get much more work done than regular daytime hours. The company’s warehouse is open 22 hours a day.

Company executives said their drayage drivers can triple their productivity on a Sunday, when they can go in and out of a terminal without waiting, compared with congested weekday hours. That benefit easily makes up for the 10 percent or more the company must pay drivers to work on a Sunday.

The ability to quickly pick up a box, and know when it will come out of the port, is prized by BCOs in the modern, just-in-time market characterized by lean supply chains and low inventory levels, company officials said. As a result, the company tries to get all boxes out of the terminal within 24 hours, and a maximum of 48 hours, of removal from the ship.

“We will take advantage of every program that the terminals will offer for non-peak demand times,” said James Overley, East Coast’s CEO. “If the terminals will offer a program for Saturday and a Sunday, we will talk with our customers about it, and we will say ‘Hey, we can pick up all of your containers over the weekend and get them in the inventory. There is a cost to that. Would you be willing to pay for part of that?’”

Many customers will agree in order to have the certainty of knowing when their container will be available, Overley said.