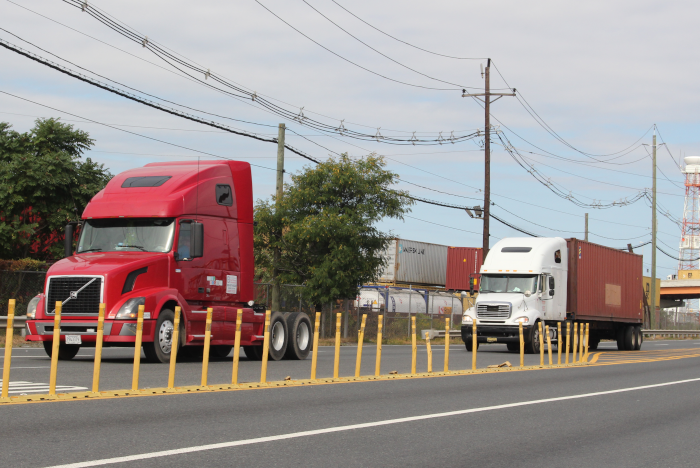 Truckers fear that the tougher scrutiny that New Jersey is placing on independent contractors could make it more difficult for many of the 9,700 trucks that serve the Port of New York and New Jersey. Photo credit: Hugh R. Morley.

A report commissioned by New Jersey Governor Phil Murphy calling for tougher treatment of companies that misclassify employees as independent contractors has convinced some truckers the state is targeting the owner-operator model that is key to moving cargo in the state.

Murphy, on July 9, the day of the report’s release, also signed a law that allows the State Department of Labor (DOL) to put a stop work order on companies that commit violations of state wage payment laws, most notably misclassifying workers as independent contractors.

The new law, and the report, follow the enactment last September of new rules governing how the DOL determines whether an independent contractor is truly independent, or actually so much under the control of an employer that the company was effectively an employer and the driver an employee. The report, issued by a task force created by Murphy — a Democrat and union supporter — focuses on the misclassification issue in a variety of sectors, not just trucking.

The issue has been closely watched by truckers across the state, especially in the Port of New York and New Jersey, where about 85 percent of the 9,700 trucks that actively serve the port are owner-operators. Cargo volumes through the port rose by 5 percent in the first four months of 2019, to 1,685,914 loaded TEU, compared with the same period in 2018, according to PIERS, a sister product of JOC.com within IHS Markit.

Gail Toth, executive director for the New Jersey Motor Truck Association, said the law and report just add to the threat to independent operators that arose with the rule change in September.

“They have done everything possible to make using independent contractors as undesirable as possible so that no one does it,” Toth said.

The dispute echoes a similar faceoff in California where the Teamsters have sought to dramatically increase the number of employee harbor truck drivers in the ports of Long Beach and Los Angeles so the union can organize them. Under US law, independent contractors such as owner-operators cannot be unionized, but employee drivers can.

In New Jersey, the rule enacted in September erased an existing state rule, known as the 20-factor test, that was used to determine whether a worker truly was an independent contractor. The change required the contractor to ask the Internal Revenue Service (IRS) for a letter stating they are an independent operator, or provide an IRS audit that shows it, to prove their independence to obtain exemption from federal employer taxes. Truckers say that proving independence is more difficult with the IRS route.

Truckers say the change could diminish the port’s drayage fleet just as cargo volumes are increasing. State officials, however, depict it as a relatively minor rule adjustment that would clarify confusion over the problem of the state interpreting federal rules.

The Teamsters union, which pushed for the rule change, believed a large proportion of the port’s owner-operators could be found to be employees under the new rule.

The task force report offers a range of recommendations to crack down on misclassification, and a release accompanying the report called it a “widespread and illegal practice” that “cheats some workers out of benefits and wages, hurts law-abiding business owners, and costs the state tens of millions of dollars a year in lost employment-related tax revenue.”

The suggested actions in the report include greater sharing of employment data between state departments and other states to better track employee classification, using state laws to revoke or suspend business licenses, making referrals where appropriate for criminal prosecution, and increasing public awareness of the issue.

The report also suggested that New Jersey should enact a bill modeled after a section of the California labor code that holds retailers accountable for a trucking company’s violations if they are on the published list of carriers that violate California labor laws. The report suggested New Jersey could broaden this legislation to make companies liable if they work with companies that have unpaid final judgments for failure to pay wages, failure to remit payroll taxes, or failure to provide workers' compensation insurance.