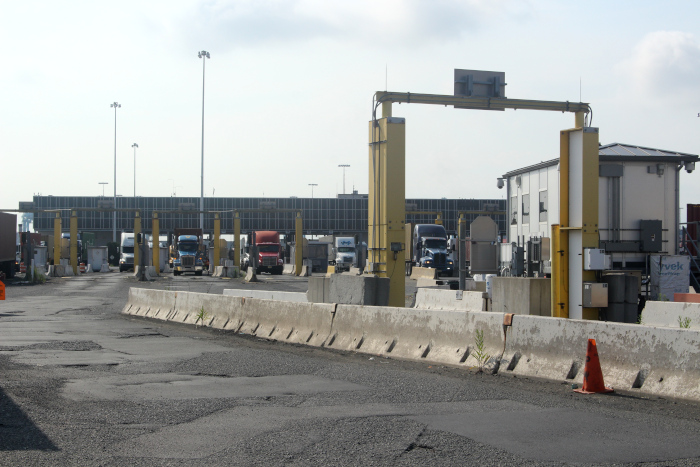 Port officials are watching the impact of the reassignment of 50 Customs and Border Protection (CBP) officers from the Port of New York and New Jersey to the southern border of the United States. Photo credit: Hugh R. Morley.

The Trump administration has put a “strain” on the Port of New York and New Jersey’s ability to handle rising cargo volumes by shifting 50 US Customs and Border Protection (CBP) officers from the port to the southern border of the United States, members of New Jersey’s congressional delegation said.

In a June 5 letter to Kevin McAleenan, the commissioner of CBP and acting secretary of the Department of Homeland Security, the legislators — Sen. Cory Booker, Sen. Robert Menendez, Rep. Albio Sires, and Rep. Donald Payne — said the moves are “part of a nationwide reassignment of several hundred CBP officers from airports and seaports” to the border. Expressing concern at the reassignment, the legislators said the New York-New Jersey region requires “a robust CBP presence to ensure the safety and security of the United States.”

The shift of officers from the port is part of President Donald Trump’s move to reassign CBP officers to the southern border to bolster immigration personnel. In April, trucks heading north from Mexico faced delays of between 60 minutes and three hours, sometimes longer, after CBP reassigned officers from cargo inspection functions to help handle the rising number of undocumented immigrants arriving at the border. At that time, CBP said it had deployed 300 officers to the southwest border from around the country.

The four legislators note the reassignment of the officers comes as New York-New Jersey is expecting a surge in cargo volume, presumably a reference to the start of the peak shipping season, which hits the port around July. The port, similar to others around the US, has seen ongoing growth in container cargo, with throughput growing 4.8 percent year over year to 1.68 million loaded TEU in the first four months of 2019, according to PIERS, a sister company of JOC.com within IHS Markit.

The loss of the customs officers was discussed at a May 8 meeting of New York-New Jersey’s Port Performance Council, a stakeholder group that studies how to overcome challenges facing the port and improve its efficiency. Minutes from the meeting say the port’s marine terminal operators “have been advised by CBP that available overtime could be limited because of repositioning” agency staff to the southern border.

The issue was raised Wednesday at a meeting in Washington D.C. between CBP officials and representatives of the American Association of Port Authorities (AAPA), among them Beth Rooney, assistant director of strategy and innovation for the Port Authority of New York and New Jersey (PANYNJ). The AAPA in a May 6 letter to McAleenan said it was “extremely concerned” about the officer reassignments from the ports.

PANYNJ, asked about the impact of the officer reassignments, said in a statement, “We have met with Customs and Border Protection leadership to express our concern about any staffing changes at our airports or seaport.” The Authority said it remains in “active discussions seeking ways CBP can mitigate any adverse operational impacts on the traveling public and ports that occur as the result of any shift in officer assignments.”

The four legislators asked McAleenan to provide details of the officer reassignments, including what resources have been redirected from the port to the southern border, and if there are plans to move additional officers in the future. Their letter also asked how long the officers will be reassigned, and the expected impact of the move on the port.

The Association of Bi-State Motor Carriers, which represents drayage carriers in the port, said it is watching for any impact of the reassignments. Given the size of the port, and its growing cargo volumes, “the Department of Homeland Security must provide our marine terminals with the resources they need to ensure that appropriate levels of security are maintained and cargo remains secure,” Lisa Yakomin, the association’s president, said in a statement.

The legislators said the port is already at a “competitive disadvantage” compared with other ports due to the “inconsistent implementation of the Reimbursable Services Program” for marine terminal operators. The letter says that while customs services at West Coast ports, such as Los Angeles and Long Beach, are supported 24 hours a day, seven days a week under the CBP budget, New York-New Jersey now funds Saturday customs hours itself. In the past, those hours were funded by the CBP, the legislator said.