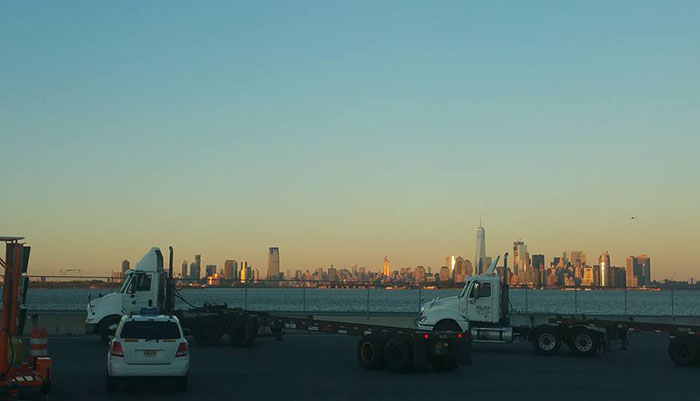 Global Container Terminal hopes that lines such as this one outside its gates will become a thing of the past when it gets its appointment system up and running. Photo Credit: Port Driver

Global Container Terminal in Bayonne, where the pilot program was due to start, said the postponement was “expected to be a minor delay, and an updated announcement on the implementation will follow shortly.”

An appointment system was one of the top recommendations of an industry-wide Council on Port Performance in June 2014. Truckers have been skeptical, saying they fear they’ll be held responsible for delays on highways, at earlier pickup stops, or at congested terminals, that they can’t control.

John Atkins, president of GCT USA, which owns the Bayonne terminal, said the start of the appointment system was delayed in order to make “a few adjustments … after running it for a while.” He declined to elaborate. The system, in development for the last two years, had undergone testing in recent weeks to remove glitches.

The announcement of the latest delay came so suddenly that the Association of Bi-State Motor Carriers heard an update on launch preparations at the group’s monthly meeting Tuesday morning, only to learn at the end of the meeting that the launch had been postponed. The announcement drew laughter and a ripple of applause among the 40 or so members present.

The system, which is broadly similar to others at several ports around the nation, requires truckers to make a reservation to deliver or pick up a container. Initially, Global plans to require appointments only between 6 a.m. and 8 a.m. on weekdays. The plan is to gradually expand the time during which reservations are required, as truckers and terminal gate workers get used to the system.

After the Council on Port Performance first suggested an appointment system, the port authority hoped to launch it during the first half of 2015. The start date has been pushed back as systems developers work on technology to manage the appointments and mesh them with terminal operating systems.

Appointments for trucks were among the responses to periodic congestion that early last year became so severe that some truckers were arriving the night before gates opened in order to be first in line the next morning.

Port and terminal officials say that when everyone tries to arrive unannounced at the same time, the result is traffic jams and delays when the gates open, but that some yard cranes sit idle later in the day when traffic slackens. By metering the flow of trucks, terminals hope to even out the surges and spread the volume.

The appointment system is one of three measures that port leaders say are priorities in smoothing traffic flow. The others are longer gate hours and a port-wide, universal chassis pool, neither of which are close to happening.

Truckers in the past have opposed appointment systems until terminals can ensure quick turn times that don’t leave drivers behind schedule for their next pickup or delivery. Jeff Bader, president of the Bi-State association, told members last week that the association would “aggressively monitor” the appointment system and inform the terminal of any developments or problems as it was implemented.

“Up until now, appointment systems at other ports have proven to be problematic,” the letter said. “However, in the interests of cooperation and partnership, we appreciate any good faith efforts that are being made to improve efficiency and productivity.”

nothing will fix the issues

Permalink Submitted by steve@lakwareho... on Oct 12, 2016 7:16AM EDT
nothing will fix the issues at GTC the place is a nightmare that everyone has gotten used to
Port News›US Ports›Port of New York and New Jersey
Port News›Port Productivity
Trucking Logistics
Trucking Logistics›Drayage