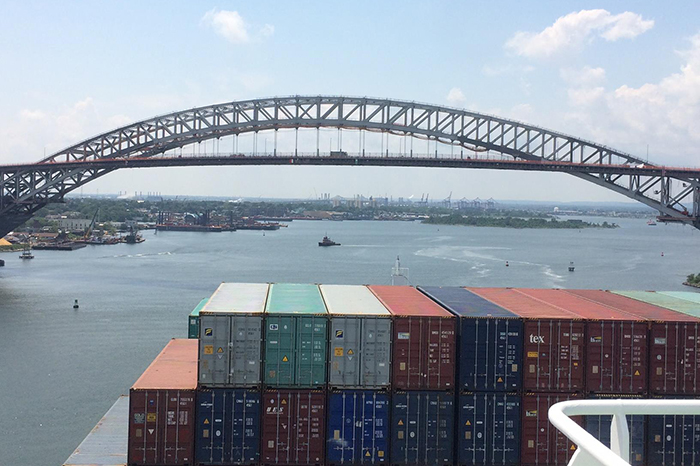 The OOCL Berlin prepares to pass under the recently raised Berlin Bridge.

A 13,200-TEU vessel that is the largest ever to enter the Port of New York and New Jersey and all US East Coast ports passed under the newly-elevated Bayonne Bridge Monday afternoon, launching a new era of mega-ships of up to 18,000 TEU that are expected to challenge the port’s efficiency and resources.

The OOCL Berlin, in service for the Ocean Alliance, entered the port at around 2:30 p.m., headed for Maher Terminals, having started its trip in Hong Kong and sailed through the Panama Canal. The Port of New York and New Jersey had previously only handled ships slightly larger than 10,000 TEU.

The ship is thought to be the largest to stop at the East Coast, coming two months after the previously largest ship to visit the coast, the 13,092-TEU Cosco Development, stopped at Charleston, Savannah, and Virginia.

The arrival of the OOCL Berlin — able to carry more than 30 percent more cargo than its largest predecessor — about five weeks after the US Coast Guard certified that big ships could pass under the bridge, offers a sign of how rapidly cargo volume into the port could rocket.

Until the elevation project, the bridge's elevation of 151 feet was too low for most ships larger than 9,500 TEU to pass below. That prevented them from reaching three of the four largest terminals in the port, with only GCT Bayonne able to handle the largest ships calling the port. The $1.6 billion project to raise the bridge elevation to 215 feet means that ships up to 18,000 TEU can now pass under the bridge.

The Port Authority of New York and New Jersey said another ship of the same size, OOCL Malaysia, will join the route taken by OOCL Berlin later this summer. And three other 13,2008-TEU ships from The Ocean Alliance — the OOCL Korea, the OOCL Chongqing, and the OOCL France — are “being considered for future rotation to New York and New Jersey, based on market conditions in the second half of 2017,” the authority said.

Other carriers are also looking to bring big ships to the US East Coast. CMA CGM is planning a loop that is the first that “exclusively deploys tonnage of 13,000 TEU or more,” maritime analyst Alphaliner recently reported. The carrier has assigned two new 14,414-TEU ships — maxi-neo-Panamaxes — to the route, which links Hong Kong and other points in China to Norfolk, Savannah, and Charleston, but does not stop at New York-New Jersey.

Ports along the East Coast closely watched the bridge construction progress believing that, with the height restriction removed, more large vessels would come through the expanded Panama Canal — which opened just over a year ago — and along the coast to stop at the major New York-New Jersey terminals.

The escalation in expected cargo comes as the port faces attrition in its East Coast market share. The port’s share of the Asian import market fell from 43 percent of the volume of loaded imports into the East Coast in 2010 to 34.5 percent at the start of the 2017, according to PIERS, a sister product of JOC.com. The port’s share of all loaded TEU fell from 33.5 percent in 2010 to 29 percent in 2016.

Preparing for the new mega-ship era, the Port Authority of New York and New Jersey has invested heavily on port upgrades, spending $4.7 billion on dredging, rail access, and other projects, including the bridge. Port terminal operators have spent about $2 billion on upgrades.

The prospect of bigger ships has raised questions about how the terminals will adapt to the short bursts of intense cargo loading and unloading that come with big ships, the ability of the port drayage community to get containers in and out of the port, and how the big ships should best navigate the narrow channel into the port.

“It was first and foremost, an extremely humbling experience,” to be the pilot to bring in the first such large ship into the port, he said. “I don’t think there was anything that we hadn’t anticipated.”

“It was kind of neat because as we went under the new Bayonne Bridge you could see all of the workers, they were standing there, kind of saluting the ship,” Glassing said, referring to construction workers removing the final parts of the lower level of the bridge.

Captain John Oldmixon, president of the Sandy Hook pilots, said he and other association officials met at Maher Terminals 10 days ago with representatives of the terminal and the Metro Pilots Association, which represents tug boat pilots in the port, to go over final details of the ship's arrival. Four tugboats guided it into the harbor, Capt. Glassing said.

Since the opening of the elevated bridge, at least half a dozen ships that were too large to pass under the bridge before it was raised have now done so. They included three Maersk Line ships of about 10,100 TEU and the 10,062-TEU Zim Antwerp.

How to Improve OTIF: 15 Tips for On Time and In Full Delivery
END_OF_DOCUMENT_TOKEN_TO_BE_REPLACED