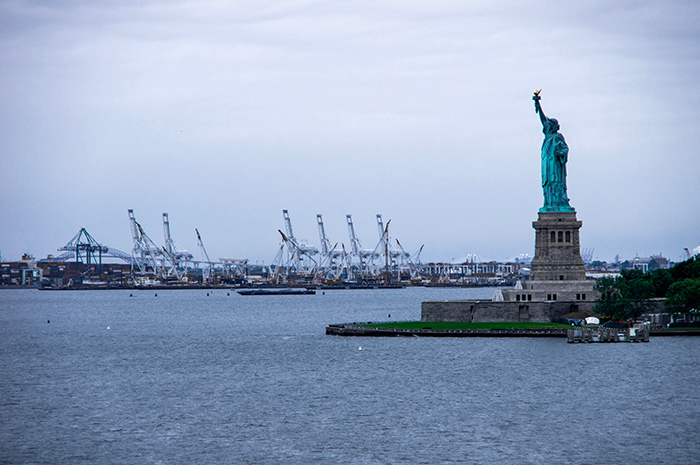 The coronavirus disease 2019 (COVID-19) impacted just over 320 longshore workers in the Port of New York and New Jersey during its peak in March and April, and 61 tested positive in May. Photo credit: Shutterstock.com.

In early March, the COVID-19 pandemic was on the Port of New York and New Jersey’s doorstep, threatening to infect its some 3,500 workers and cripple operations in and around the largest US East Coast port. The first warning had come Feb. 7, when a cruise vessel was identified as having so-called passengers of concern, and by mid-March, the port was deemed an essential service by the New Jersey and New York state governments.

“But then things changed pretty quickly when we started to get our first cases showing up in the workplaces, and the anxiety levels really started to peak,” said John Nardi, president of the New York Shipping Association (NYSA).

The warnings from healthcare professionals were frightening: Every positive COVID-19 case could infect up to 10 people in close contact. But port operations aren’t designed for social distancing. “Everyone is being told to isolate, and we’re being told to work together,” Nardi said in a JOC Uncharted segment.

New York-New Jersey port leaders sprang into action. Tapping the formal networks created by the Council on Port Performance, which was forged after summer gridlocks in 2013; Sustainable Terminal Services, a nonprofit created by the port’s six marine terminals; and informal networks, the port authority, longshore labor, and marine terminal operators marshalled a response. The NYSA and International Longshoremen’s Association (ILA) together agreed on messaging about how to prevent the spread of the coronavirus disease 2019 (COVID-19), set up daily temperature checks, and established contact tracing procedures for any worker who reported symptoms, Nardi said.

The ILA and terminal operators coordinated staggered shifts for when workers were amassed, changed shift start times to avoid overlap when possible, and carved out time for cleaning. Wearing masks, regularly using hand sanitizer, and only allowing two port workers to use any piece of machinery in a given day became the norm.

“We set up three shifts of a day temperature checking,” reducing the anxiety in the workplace, Nardi said. “If you know the person who is working next to you had their temperature taken, you’d feel a lot better knowing you’re safe that day.”

In early April, two longshore workers were identified as having died from COVID-19. The coronavirus impacted just over 320 longshore workers during the March and April peak, and 61 tested positive in May, according to the NYSA.

Because longshore workers don’t generally receive sick pay, and disability benefits are only available for injuries directly related to the job, those unable to work because of illness or quarantine would normally have been left in a tight spot. However, an emergency fund created by the NYSA and United States Maritime Alliance, the administrator of the coastwide master labor contract, helped affected workers supplement unemployment and temporary disability benefits.

The formal port group helped elicit a coordinated response to the crisis, but so did informal networks, said John Atkins, president of Global Container Terminals USA. Marine terminals are comfortable working together, having pooled their resources to move relief supplies for Hurricane Sandy in 2012.

“Even though we compete on multiple levels for the same business, we actually function as a port community on that level to ensure everyone is keeping their facilities up and running,” Atkins told JOC Uncharted.

The port’s response went well beyond its physical footprint. The port authority worked with neighboring states to help ensure operators of warehouses and distribution centers understood their facilities were considered essential services. In one case, a cargo owner shipping 500 containers weekly shut down its Pennsylvania warehouse after the state’s initial essential service messaging.

“We were concerned about the impact of that cargo backing up at our terminals and the cascading effect it would have up and down the supply chain,” Beth Rooney, deputy port director of the Port Authority of New York and New Jersey, told JOC Uncharted.

The office of New Jersey Gov. Phil Murphy helped get the issue on the radar of its Pennsylvania counterpart. That led to Pennsylvania’s state government clarifying its communication on essential service. After three days of being shuttered, the warehouse reopened.

Additionally, the port authority, chamber, and trade groups thrice surveyed regional warehouse operators to determine what types of storage were still available for importer and consignees unable to store cargo, and they created an online portal to help importers and consignees match up.

Had leaders failed to act, port congestion could have delayed shipments of critical COVID-19 relief supplies and foodstuff. Ultimately, the port’s response, which continues today even as the number of positive cases in the region recedes, reflects its resilience.

With “the structure that we have, the relationships we have built — while there are fierce competitors in the Port of New York–New Jersey footprint — everyone recognizes that we are all in this together. And whatever the impact, if it’s affecting their business, it’s affecting all the businesses and their supply chains on either side of them,” Rooney said. “What we have learned is that the relationships and the structures for coordination, collaboration, and communication that we have in place work.”