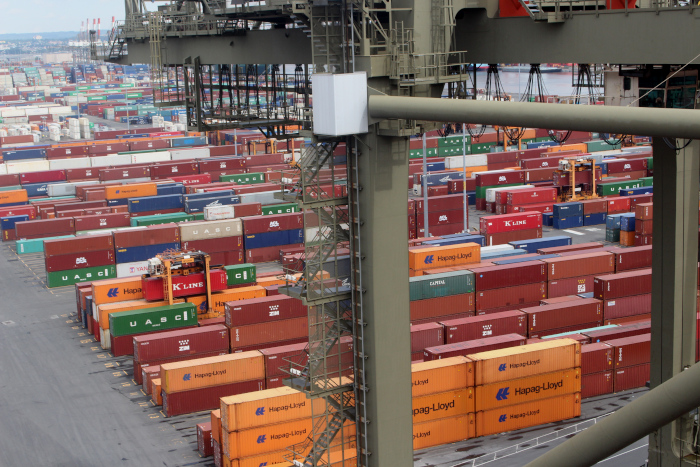 The Port Authority of New York and New Jersey has changed a controversial cargo facility charge so that it is levied only on containers loaded with cargo, and not empties. Photo credit: Hugh R. Morley.

Hapag-Lloyd this month will begin passing on to customers a charge levied by the Port Authority of New York and New Jersey (PANYNJ) to fund infrastructure improvements, after absorbing the contentious fee since its implementation in 2011.

The carrier will levy a cargo facility charge — $10.13 per loaded TEU and $20.26 per loaded FEU — on imports into New York-New Jersey from April 20 and on exports out of the port from May 1, according to a customer advisory.

For shippers, the charge adds to the costs of doing business in the East Coast’s largest port just as it looks to strengthen its competitive edge against its coastal neighbors, especially in attracting discretionary cargo to and from the Midwest.

Samuel Stueber, a spokesperson for Hapag-Lloyd, told JOC.com the company’s shift brings it in line with the original intent that the charge be paid by shippers. “[Hapag-Lloyd] has so far absorbed this cost and now is passing this on to the customers as was the intent of this charge by PANYNJ,” he said in an email.

PANYNJ introduced the charge in 2011 to cover the costs of road and rail projects and post-9/11 security improvements. It replaced an intermodal rail lift fee of $57.50 per container and a volume-based truck registration fee of $2,500 to $10,500 per quarter.

Carriers have for years opposed the charge, arguing it burdens them with extra costs and forces them to pay for services they may not use. PANYNJ says the charge is the fairest way to cover costs of needed improvements that benefit all port users.

The fee, which raised $43.8 million last year, has funded recent projects to construct and realign key artery roads through the port, and to improve main track and side track on rail lines, including the addition of 9,000 feet of track, PANYNJ said Thursday in an email to JOC.com.

Hapag-Lloyd’s decision to pass on the fee comes after PANYNJ on Jan. 1 increased the fee for moving an FEU or TEU through the port by 14 percent to meet the rising costs of completing ongoing projects, the authority said.

The port’s new fee schedule also increased the per-vehicle charge imported or exported through the port from $1.34 to $1.40 and increased the per-ton charge for bulk cargo from 17 cents to 19 cents. For the second year, however, the charge in 2020 is not being levied on empty containers, PANYNJ spokesperson Amanda Kwan told JOC.com. The decision to eliminate the charge on empties came out of negotiations between the ocean carriers and the port authority, at the request of the carriers, the authority said.

Donald Kassilke, an attorney for the Ocean Carrier Equipment Management Association (OCEMA) who has represented carriers on the issue, said carriers believe the cargo facility charge was intended to be a charge on cargo, as it is with autos and bulk cargo, and not empty containers. A levy on cargo makes it easier for carriers to show shippers the charge as part of the cost of moving the cargo and enables them to have a clearer discussion of who should pay it, Kassilke said.

Empties accounted for about 30 percent of the 7.47 million TEU handled by the port in 2019, PANYNJ figures show.