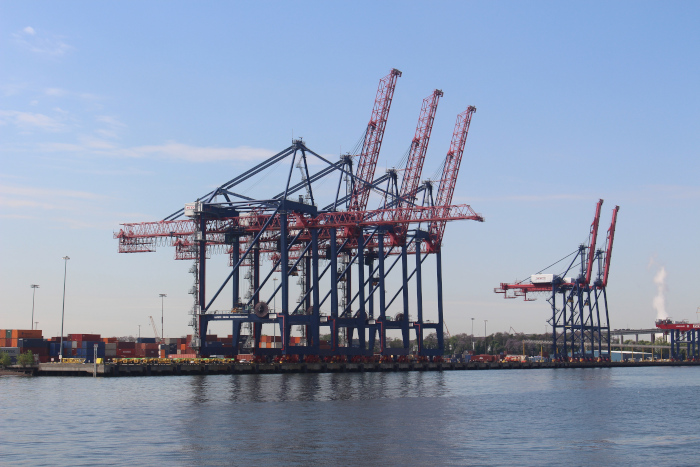 GCT New York, after struggling to retain cargo volume seven years ago as larger terminals at the Port of New York and New Jersey expanded their capacity, is riding a rebound. And as cargo volumes through the port rise, the Staten Island facility — which is operating at approximately half of its capacity — is positioned to build on a 50 percent surge in cargo it has seen over the last three years.

The number of ocean carrier services calling at the terminal has increased from three to five since 2015, and cargo moving by rail through the terminal has “jumped significantly” in recent years, said John Atkins, president of Global Container Terminals USA, the terminal’s parent company.

That’s partly due to an expansion of the contract under which New York City sends its municipal waste by barge to the terminal, to be loaded onto trains and sent for disposal in upstate New York or Virginia, he said. The number of containers full of trash handled by the terminal rose by 40 percent after the city opened a second trash barge departure point, in Upper Manhattan, in the first quarter of 2019, adding to the existing barge terminal in Queens, he said.

The terminal’s position has improved since it lost cargo volume in 2011 when the Port Authority of New York and New Jersey enacted a dramatic toll hike in 2011 on the Goethals Bridge, on a main artery into the terminal. But a credit program introduced two years later has helped reduce the toll burden on truckers. And improvements in terminal turn times and lift speed have made the terminal increasingly attractive, Atkins said.

The terminal figures prominently in Port Authority of New York and New Jersey’s Port Master Plan 2050, released July 9, which predicts that over the next 30 years the port will need to prepare for a more than doubling of the existing cargo volume. The plan estimates that port cargo volumes will increase from about 7 million loaded and unloaded TEU in 2018, to between 11.5 million and 17 million loaded and unloaded TEU in 30 years.

The port is already seeing steady growth, with a 6.5 percent increase last year, over 2017, to 5.1 million loaded TEU, according to PIERS, a sister company of JOC.com within IHS Markit. And volumes grew 5 percent from January to April this year, to 1.69 million TEU, the figures show.

The 300-acre GCT New York facility — which the master plan said accounts for about 10 percent of the port’s capacity — is now operating at slightly more than half capacity, said Atkins. To increase that, the master plan suggests the implementation of a coordinated marketing strategy to “establish higher utilization of the terminal footprint.” The plan also calls for the terminal to be “progressively built out to support enhanced container handling capability,” over the next 15 years, including the development of an adjacent land tract into a logistics site. And the plan also suggests an expansion of the rail terminal, with the possible addition of four new tracks.

“There's plenty of capacity that's available in the existing footprint right now in Staten Island,” said Beth Rooney, deputy director of the port division at the authority, which makes it an obvious location to help the port’s future volume needs.

GCT New York was one of four terminals that were unreachable to vessels larger than 9,500 TEU until the opening of the elevated Bayonne Bridge in June 2017. The height restriction of the 151 foot bridge, which was increased to 215 feet, prevented big ships from reaching the Staten Island terminal, along with Port Newark Container Terminal (PNCT) in Newark, and APM Terminals and Maher Terminals in Elizabeth.

The terminal, which has a 50-foot draft and an on-dock rail terminal with daily service from CSX Transportation and Norfolk Southern Railway, lost cargo volume around 2011, in part due to the port authority’s decision to double the tolls on the tunnels and bridges between New York and New Jersey. Among them was the Goethals Bridge, which passes next to GCT New York.

Shippers balked at paying the increase, which added $10 to a five-axle vehicle in the first year, rising to an increase of $50 in the fifth year. The current toll for a five-axle trucks ranges from $85 to $105, depending on the time of day and whether cash is used or not.

Around the same time, the terminal also suffered from a diversion of cargo to other terminals in the port — mainly to Newark and Elizabeth — as terminals there added capacity, Atkins said.

Since then, the toll issue has been mitigated somewhat. In 2013, the authority agreed to give truckers taking cargo to GCT New York a toll rebate. That means the port authority now returns all but $34 dollars of the toll, Atkins said. The port authority masterplan also suggests the port adopt a strategy to promote “equity between [the terminal] and other competing container terminals,” including a review of the toll discount program.

Atkins said that despite the terminal facing a $34 charge that truckers don’t have to pay to reach other the four main New Jersey terminals, GCT New York has advantages that can offset the added expense.

“You have to look at the overall cost of doing business,” Atkins said. One advantage is the terminals truck turn-time — about 60 minutes on a double move — is the quickest in the port, he said. The terminal also has the highest marine productivity in the port, with 32 moves per hour, Atkins said. In addition, the terminal is about six miles closer to the key warehouse cluster around Exit 8a in Central New Jersey and so offers a quicker delivery time to the Elizabeth and Newark marine terminals, Atkins said.

GCT New York also has the only on-dock customs examination station (CES) in the port that helps swiftly process cargo from South and Central America, which accounts for a significant part of the terminal’s business, Atkins said. The terminal’s five ocean carrier services include a Hamburg Sud-Hapag-Lloyd service to the east coast of South America and one to the west coast, and a Sealand service to Central America.

“With agricultural cargo, it just makes it faster, cheaper, and quicker to get those boxes through own on-dock CES,” he said. The other two services are a Grimaldi service to Africa and one to Europe and the Mediterranean, put on by the Ocean Alliance.

The masterplan also calls for the development of the Port Ivory site, a land tract formerly owned by Proctor & Gamble, which was acquired by the port authority two decades ago. While one section has since been turned into the rail terminal, two sections remain unused, and the master plan suggests developing them into a logistics center or offshore wind facility.

every trucker charges much

Permalink Submitted by TAVANZATO on Jul 30, 2019 8:59AM EDT
every trucker charges much more then $34.00 ( anywhere from $100 - $250.00 ) this is also an owner operator port, many o/o do not have ez pass. you want to even it out, suspend the toll. as a BCO i would never sign a service contract that calls NYCT., the place is well run for sure but not going to add $150,000 in expense when maher is down the street, has the longest hours, and is run very well
Port News›US Ports›Port of New York and New Jersey
Port News›Terminal Operators
North America›United States