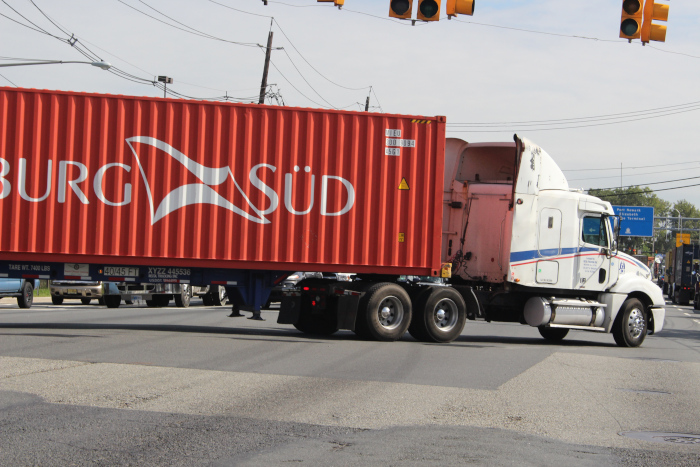 Federal officials want to further limit the emission of nitrogen oxide from heavy trucks, such as those in the Port of New York and New Jersey. Photo credit: Hugh R. Morley.

With NY-NJ port stakeholders in support, a federal environmental regulator on Monday launched an effort to gain the industry’s input on the plan to limit the emissions of nitrogen oxides from heavy duty trucks for the first time in 19 years.

The Environmental Protection Agency’s (EPA's) plan, fueled by public concern over the high levels of emissions from heavy trucks, will put pressure on US port authorities, including those in New York and New Jersey, to tighten emission standards in future on their drayage fleet. The new standards will eventually prompt authorities to demand newer, lower-emission truck models.

The US federal government is seeking to further limit the emissions of nitrogen oxides from heavy duty trucks by pushing manufacturers to create more efficient engines. The EPA, during a press conference Monday at the Port of New York and New Jersey, launched a 30-day national public comment period to solicit input from industry and community groups on how best to cut truck emissions.

The comments received during the EPA’s “Cleaner Trucks Initiative” will help shape new regulations, a draft of which will be opened for public comment later in the year, with the final regulations expected to be in place in late 2020 or early 2021, Pete Lopez, regional administrator for EPA Region 2, and other EPA officials said at a press conference in Newark, New Jersey.

The campaign hits on a contentious issue that has surfaced nationwide, but especially for ports in urban areas, where concerns over truck emissions and pollution are common. Port authorities wrestle with how to limit the number of older, higher-polluting trucks while ensuring the port drayage fleet is sufficient to meet the needs of port users.

Given the importance of trucks to move cargo, the challenge for the EPA is to create regulations for all trucks that ensure they are “clean, but also remain a competitive method of transporting goods,” Lopez said.

Lopez said the initiative will focus on the testing programs to ensure that the emissions from newly developed engines are restricted in a variety of operating conditions. Between 2001 and 2017, nitrogen oxide emissions fell 40 percent, but trucks continue to be one of the largest contributors to the emissions, the EPA said in a statement released in concert with the initiative’s launch.

In the past, much of the testing has focused on emissions on highway truck driving, Lopez said.

“So, emissions on a highway from long-distance hauling will have a certain set of impacts under a certain performance of a vehicle,” he said. “We want to be more comprehensive and inclusive. So, we're also going to step back and look at what happens in a more urban environment or when the vehicles are performing in different capacities,” such as more stop-start situations.

The EPA is also looking to ensure that truck manufacturers provide long enough warranties on emission control systems that they cover much of the life of the vehicle. Without that, truck owners, when the warranty expires, may decide they don’t want to spend the money to repair the emission control systems when they go wrong, said Dan Birkett, an environmental scientist for the EPA.