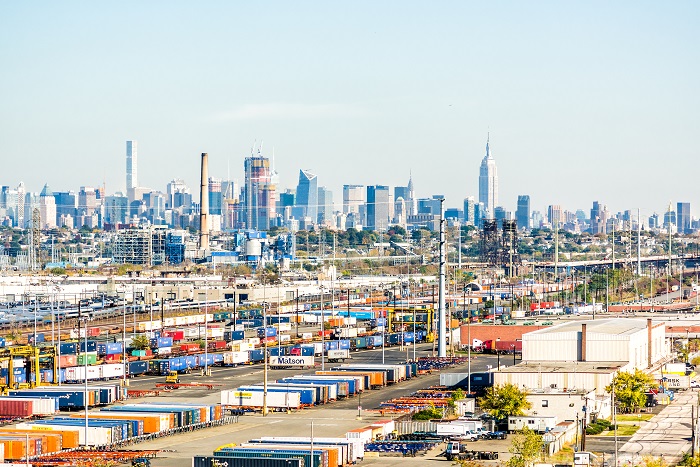 Demand from e-commerce is outstripping warehouse supply, forcing rental rates substantially higher in the metropolitan New York area; even so, many shippers and logistics providers are leasing this preferred space to be closer to customers. (Above: Warehouses and facilities in northern New Jersey, just west of Manhattan.) Photo credit: Shutterstock.com.

Demand for industrial space in and around the Port of New York and New Jersey is so great that the pending completion of 12 million square feet of new space will likely do little to lower rental rates or increase vacancies, real estate brokers say.

In response to the continued market tightness, some shippers and logistics providers hunting for space will likely look to cheaper markets that are more distant from the port, such as Central New Jersey and Lehigh Valley, Pennsylvania, and others will simply opt to swallow the higher rent, believing that transportation costs from going elsewhere would be even higher, brokers say.

Thirteen projects of at least 200,000 square feet are in the pipeline in New Jersey along the I-95 corridor within 10 miles of the port, and one in neighboring Staten Island, said Mindy Lissner, executive vice president for CBRE’s industrial and logistics division. Port-related businesses are expected to take most of the space in the projects, which include one that will add 1.4 million square feet to the market, and another that will add 3.2 million square feet.

The Port of New York and New Jersey, like other urban ports, has seen demand for space skyrocket as cargo volumes and vessel sizes have increased steadily, and as e-commerce business has surged, prompting online vendors to look for warehouse space closer to consumers to make delivery of goods as quick and easy as possible.

Average lease rates in the heart of the Port of New York and New Jersey have in the last six years jumped 40 percent, rising in some cases to close to $10 per square foot, and the pressure for space will likely grow as port cargo volumes are expected to rise in the wake of the completion last June of a project to elevate the Bayonne Bridge. The elevation enabled mega-ships to get to three of the port’s four main terminals. In addition, the opening of the expanded Panama Canal, in June 2016, is also expected to continue to boost cargo volumes along the East Coast.

Furthermore, although most of the new warehouses in development are expected to be ready by 2020, the high-rent, low-vacancy dynamic is not likely to change, real estate brokers say.

“Right now demand is outpacing supply, rental rates continue to rise,” Lissner said. “As long as demand continues as it is, I think there will continue to be upward pressure on lease rates before they level out or stabilize … we don’t see any signs of demand decreasing.”

Lissner said net absorption may have stabilized and could go down, as “construction completions are outpacing new leasing.” Even so, the practice of pre-leasing — the signing of leases before construction ends — is “at an all-time high.”

The continued high rents will likely prompt some port-related companies looking for space to consider the Central Jersey area around exits 7 and 8a on the New Jersey Turnpike, about 35 miles southwest of the port, she said. But the high demand for space in that market has in the last 18 to 24 months pushed the boundary of the market farther south, with some companies located as far away as the state’s southern-most border, she said.

In addition, some companies may consider moving to Lehigh Valley, about 60 to 80 miles west of the port, Lissner said, adding that the Lehigh Valley market tends to attract those seeking more than 1 million square feet of space, she said.

Mark Shearer, senior vice president in the New York-New Jersey office of Prologis, said he expects some companies to conclude that paying the higher rent in and around the port is the best option.

“Rental costs account for just 5 percent of our customers’ overall supply chain costs, while transportation accounts for over 50 percent,” he said. “Therefore, customers are willing to pay higher rents if it means they can reduce transportation costs and be closer to major consumer markets.”

US industrial real estate rates dipped 0.1 percentage points to 5 percent in the first quarter, compared with 2017, while average rents rose 5.4 percent in the same period, according to a national report by Cushman & Wakefield.

Vacancy rates in Central New Jersey ticked down from 4.1 percent in the first quarter of 2017 to 2.6 percent in the year later quarter, according to the Cushman & Wakefield figures. They show the average rent in the area rose from $6.46 per square foot in the first quarter of 2017 to $6.96 in the quarter a year later. Industrial real estate rents for major markets can be found on JOC.com's Shipping & Logistics Pricing Hub.

In the New Jersey Meadowlands, which is about 10 miles from Manhattan and 14 miles from the port, the average rent increased from $8.12 in the first quarter of 2017 to $10.41 in the same quarter in 2018, the Cushman & Wakefield figures show. The vacancy rate ticked down from 4.1 percent to 4 percent in the same period, the figures show.

The list of the 14 projects under development, which was compiled by CBRE, totals more than 12 million square feet. One of the projects is based at a 90-acre waterfront site that is a former US Navy and US Army base, near the GCT Bayonne marine terminal. The property, acquired in March by the Lincoln Equities Group, is expected to create 1.6 million square feet of space, mainly for port use.

About 10 miles away in Linden, a 250-acre site that includes land used in the past by GAF Corp. and Dupont, is ready for development into upwards of 3.2 million square feet of warehouse, said CBRE.

Not yet on the list is a property for which the Port Authority of New York and New Jersey two weeks ago solicited proposals: a 53-acre site in the heart of the port in Newark, called Port Newark South Terminal, which the port authority expects to be used for warehouses, or open space purposes, such as vehicle processing.

Jules J. Nissim, executive vice president for Cushman & Wakefield, said he foresaw no easing of rents or increased vacancy, even with these projects coming online. His company recently handled the leasing of a 400,000-square-foot warehouse in the Meadowlands for Bergen Logistics, which will use it as a fully automated distribution center. He said there is three times as much demand for new space as availability at present.

“With the lack of available space and even less available quality class A space, coupled with demand outpacing supply by at least 3:1, I think new development will be easily absorbed and healthy for the market,” Nissim said.