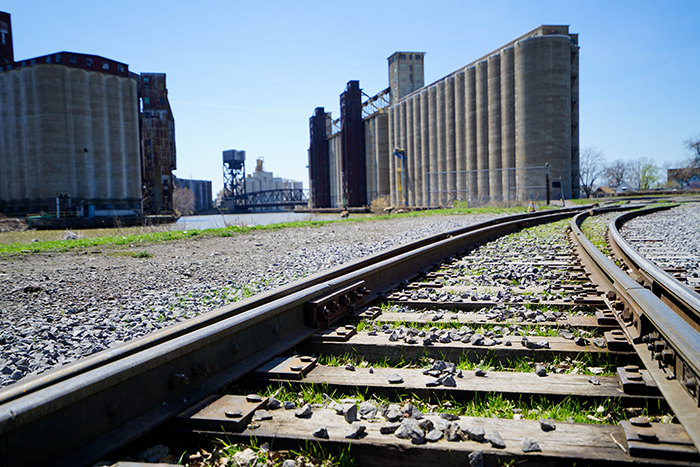 The planned intermodal port in Buffalo, New York, is expected to handle 30,000 container turns a year to and from the Port of New York and New Jersey. Photo credit: Shutterstock.com.

The further integration of Buffalo, New York, into the Port of New York and New Jersey’s rail network promises to deepen the top East Coast gateway’s inland reach, but it will take far more rail lifts to reduce container storage pressures at the port.

Uniland Development this month acquired a 20-acre parcel adjacent to a CSX Transportation yard in Buffalo, adding a crucial piece to the advancement of a proposed rail terminal and 80-door cross-dock facility. The project is the second inland port proposal to emerge with the goal of serving New York-New Jersey. New York state officials in July awarded $21 million to a facility that CSX plans to develop at its yard in Syracuse.

While any additional inland capacity would help the growing storage needs of New York-New Jersey, where cargo volumes grew by 6.5 percent in 2018, neither of the inland projects is expected to do much to get containers out of the space-challenged port, according to the Port Authority of New York and New Jersey (PANYNJ).

With a 14 percent rise in rail lifts in 2018 over the year before, to 645,760 lifts, and the opening of its fourth rail terminal in January, New York-New Jersey has placed a top priority on driving rail growth, especially by attracting discretionary rail cargo bound for the Midwest.

Given the port’s limited geographical footprint, the rising volume likely will continue to put pressure on landside infrastructure and prompt the port to store more containerized cargo inland. To date, shippers and logistics providers have responded by taking warehouse space in the Meadowlands, New Jersey, a 15 minute drive away; Central New Jersey, about 30 minutes’ drive away; and Lehigh Valley, a 90 minute drive away across the Pennsylvania border.

Even so, neither of the two planned inland ports has the location or size to make a serious dent in the kind of container congestion that could eventually force the port to look for ways to store containers away from the port, said Dan Pastore, manager of market research for PANYNJ. The port authority estimates that by 2046, discretionary cargo will account for about 30 percent of the 17 million loaded and unloaded TEU moving through the port, compared with about 15-16 percent of the 7.2 million TEU handled in 2018.

“For the growth of rail that we have over the next 10 years, we can do that with the network of rail ramps that we have in place,” Pastore said. “If our overall volume starts to rise even faster than anticipated, at some point, we would have to give some thought to an inland port.

“That is a very big project to undertake,” he added. “There would have to be a lot of thought given to how you would do it, where the perfect place would be for it, and how much money would have to be dedicated to it. Because it would not be cheap.”

Such a scenario would echo the way that the Inland Empire region in Southern California supports the ports of Los Angeles-Long Beach, although that region 50 miles to the east is served only by truck. The ports have seriously looked at a rail shuttle to the Inland Empire, but the project has not materialized.

On the East Coast, a similar strategy has played out at facilities in Gainesville, Georgia, and Greer, South Carolina, which support the port of Savannah and the Port of Charleston, respectively, Pastore said. In general, cargo is moved by rail from a port — reducing the volume stored there — to an inland facility, where it is then sent on to its destination by rail or truck.

To make an inland port viable, the cargo volume sent there is key, Pastore said. New York-New Jersey would need to send at least 5-10 percent of its volume to make the Buffalo project worthwhile, he said. That would be upwards of 360,000 containers annually, far more than the 30,000 container turns a year projected for the Buffalo inland port.

Conceived by Buffalo Niagara International Trade Gateway Organization (ITGO), with support from the port authority, the project aims to expand the market and facilities available for foreign trade in the western part of New York state, and across the border in the Ontario area of Canada. Although still in the planning stage, the project aims to give importers and exporters a cheaper, easier way to transport containers to and from New York-New Jersey, and an 80-door cross dock facility in which containers can be loaded and unloaded.

At present, four trains a week operated by CSX and Norfolk Southern run from the port to Buffalo, and in 2016 they moved 18,900 containers. Many went to Toronto, where they were offloaded and trucked back into Buffalo, a process that can add more than three days to the trip, Craig Turner, ITGO’s executive director, said. The organization estimates that the completed facility could attract many of the cargo moves currently executed by the estimated 9,000 truck trips between the port and the Buffalo region, with rail offering a cheaper alternative.

At 350 miles, or a six-and-a-half hour drive, the trip by truck from the port to Buffalo is too long to arrive and return in a day under federal hours-of-service rules. That adds the cost of an overnight stay — $350 to $400 — to the cost of a round trip, which is already around $1,600-1,950, said John Costine, vice president of sales for RED Trucking, a Newark-based Cowan Systems LLC Agent. ITGO said moving cargo by rail on the trip would save about $565 over the cost by truck but would take about two days to arrive.

Another key benefit of the planned terminal will be the expected increase in availability of containers in Buffalo, where a shortage at present deters some companies from engaging in foreign trade, said Turner. ITGO said a proposal from Chinese interests to export soybeans from Western New York fell apart a few years ago because third-party logistics companies concluded they wouldn’t be able to find the 150 containers a month needed.

The proposed CSX facility in Syracuse is similarly aimed at helping companies in its catchment area, within 75-100 miles of the inland port, rather than alleviating pressure on the Port of New York-New Jersey, Pastore said. The grant of up to $21 million provided by the New York State Comptroller in July completed the final funding step needed to create a facility at the railroad’s DeWitt Yard near Syracuse, about 250 miles — or a four-hour drive — from the port.

The facility is about 150 miles to the west of Buffalo, and the markets of the two inland ports would likely overlap to an extent. New York state says the completed facility would handle a minimum of 30,000 import/export container movements between Syracuse and the port.

Permalink Submitted by donaldsable@yah... on May 2, 2019 7:28PM EDT
To Craig Turner,Executive Director ITGO What job opportunities will there be when the Intermodal Port in Buffalo,NY is operational.Would like to start a new a new career with ITGO.The future of the plan inland port looks good for Buffalo,NY. Donald A Sable
Port News›US Ports›Port of New York and New Jersey
Rail & Intermodal
North America›United States