Bayonne Bridge raising to finish months ahead of schedule

Bayonne Bridge raising to finish months ahead of schedule 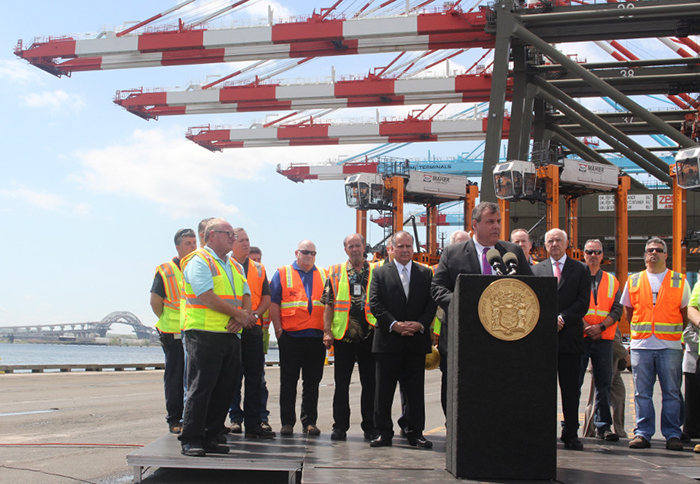 Governor Christie announces that the opening of the renovated Bayonne Bridge will take place on June 30 at Maher Terminals in Elizabeth, NJ, with the bridge in the background.

Officials at the Port of New York and New Jersey said Tuesday that the long-awaited opening of the renovated Bayonne Bridge, which has been elevated so that ships of up to 18,000 TEU can pass underneath, will take place on June 30 — six months ahead of schedule.

The completion of the $1.6 billion elevation project will enable big ships at the nation’s third-largest port to reach three of its four main terminals — Maher Terminals and APM Terminals in Elizabeth and Port Newark Container Terminal in Newark — for the first time. Ships bigger than 9,500 TEU can at present only reach the GCT Bayonne terminal because to get to the other three terminals the ships need to pass below the bridge, which at 151 high is too low to permit passage by large ships. The new height is 215 feet.

The bridge project has been closely watched by ports and their users along the East Coast as many observers believe that its elevation will boost the flow of large ships to the port, and those vessels will stop elsewhere along the coast. The opening of the bridge also is expected to increase the flow of big ships through the Panama Canal, possibly adding to the slow shift of container market share away from West Coast ports to those on the East Coast.

“Baltimore, Norfolk Savannah, Charleston — they are as eager to see this done, if not more eager, than we are,” said Beth Rooney, assistant director of the Port Authority of New York and New Jersey’s port division. “Because those large ships will not call [at] the North Atlantic [ports] until this is completed.”

She said the first big vessel under the bridge would likely not take place June 30th, but the authority is in discussion with carriers, which are planning the arrival of large vessels now that an opening date is set, she said.

Authorities had previously said the renovated bridge would open by the end of 2017. New Jersey Governor Chris Christie announced that the opening date had been moved forward at a press conference at Maher Terminals Tuesday morning that was attended by port and terminal officials as well as members of the International Longshoremen's Association, including President Harold Daggett.

“This is truly an engineering marvel,” said Christie, noting that authorities in large part maintained the flow of road traffic over the bridge as the heightening project was underway. “Engineers have compared it to performing open heart surgery while the patient runs a marathon at the same time,” he said.

The authority kept the span of the old bridge and built a new roadway above it. Once that was largely built, workers began removing the old roadway. About half of the old roadway remains and will be removed by June 30, and work is expected to continue on the new roadway, expanding it from two lanes to four, until 2019, authority officials said.

In preparation for the bridge raising and the arrival of big ships, port terminal operators have spent about $2 billion on upgrades, and the port authority and federal government have spent $4.7 billion on dredging, rail access, and other efforts, including the Bayonne Bridge project.

The port has also taken steps to prepare for the additional stress on the port expected to result from the surges of cargo that result from the larger volumes unloaded in a short space of time from bigger ships.

The Council on Port Performance, an industry-wide task force in the port, has made several recommendations, including the creation of a truck appointment program in one terminal that was launched in December, and will be replicated in others if it is successful. The port also is close to enacting a “gray” chassis pool that would provide truckers with access to any chassis in the port’s three competing pools, and has discussed extended gate hours.

Authorities first announced the plan to elevate the bridge in 2010, with an initial completion date of the end of 2015. But the port authority in 2014 said a series of winter blizzards limited construction work days, and the project had encountered delays related to utility work at the site and in fabrication of precast piers. The opening date was then set for the end of 2017.

With about half of the old road deck dismantled, authorities a week ago removed the height restriction on certain ships going under the Bayonne Bridge to the Port of New York and New Jersey — a change they said would make scheduling ships easier, because they would no longer have to worry about tides, and also enable them to carry slightly more cargo.

Rooney said the estimate of opening the bridge to large vessels at the end of this year was a conservative projection, and not entirely accurate because engineers had never undertaken such a project before. The work moved forward more quickly than anticipated, and the authority managed to speed it up by having workers on the job for longer hours, often on overtime, she said.