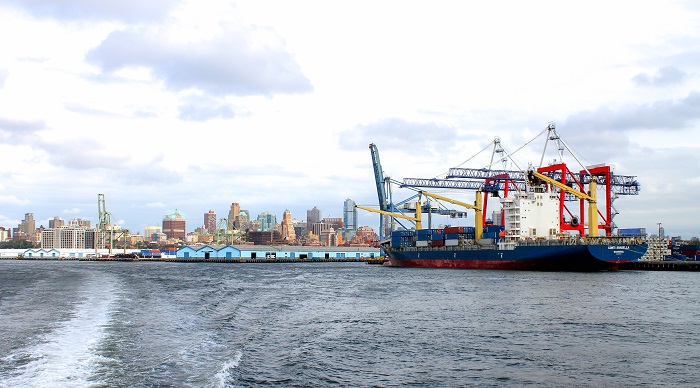 The 80-acre Red Hook terminal (above), with a 5,500-foot berth and depth of 42 feet, has for a while been the subject of speculation about its future and whether the space could be better used for residential development. Photo credit: Shutterstock.com.

The deal between operator Red Hook Terminals and the Port Authority of New York and New Jersey gives the operator a second five-year operating term if both sides agree, and means the company will "provide uninterrupted service" to its customers, according to a release by the operator. The deal also keeps in play a terminal that has emerged as a participant — along with its operator — in the authority's growing efforts to increase the use of barges in the port to cut truck traffic.

The 80-acre Red Hook terminal, with a 5,500-foot berth and depth of 42 feet, has for a while been the subject of speculation about its future and whether the space could be better used for residential development, a pressure that has grown as the price of New York real estate has skyrocketed.

In January, Governor Andrew Cuomo suggested in his state of the state speech that the terminal, in a heavily populated area near downtown Brooklyn, should be moved to a more remote location. The Port Authority at the time said one plan under consideration was for the terminal to be integrated with the South Brooklyn Marine Terminal (SBMT), about 2.5 miles from the terminal’s current location, which is owned by the New York Economic Development Corp. (NYEDC). In May, the Red Hook operator signed a 36-year lease to develop and run the 65-acre site.

Molly Campbell, the Port Authority's port director, said the agency is "pleased to have reached a short-term plan to keep the Red Hook facility in operation while we continue to analyze options for the future of maritime activities in Brooklyn.”

“We look forward to our continued partnership with Red Hook Terminals to support this enterprise,” she added.

The terminal, based in Brooklyn, is the only one on the east side of New York harbor and is one of two in New York. The other, GCT New York, is located in Staten Island, to the south of the harbor. The vast majority of the port’s business — about 90 percent - goes through the four main terminals on the New Jersey side of the harbor.

The deal comes amid growing interest in the port for moving containers by barge, with the Red Hook Terminal operator as a proponent. A federally-funded barge program has linked Red Hook with Port Newark Container Terminal (PNCT) on the New Jersey side since 2016, and the SBMT is designed to serve barge traffic.

Mike Stamatis, President and CEO of RHT, also is involved in a committee, known as the North Atlantic Marine Highway Alliance, launched this month by the Port Authority and New York City officials to stimulate barge use and reduce truck traffic and the pollution and congestion it creates.

Stamatis praised the authority's five-year agreement with Red Hook Terminals and said it will "continue the terminal’s growing economic contribution to the region.”

Canada Trade and Shipping Outlook
TPM22: What We Learned — Container Shipping in the Crosshairs
Managing E-Commerce From Order to Delivery and Beyond
END_OF_DOCUMENT_TOKEN_TO_BE_REPLACED