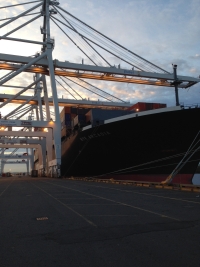 Global Terminal in Bayonne, N.J., this week handled a ship with capacity of 9,300 twenty-foot-equivalent units, reportedly the largest container ship to call at the Port of New York and New Jersey.

The NYK Arcadia called Global as part of the G6 Alliance’s CEC service. The post-Panamax ship carries containers 18 wide across its beam.

The ship is slightly larger than the 9,200-TEU ships that call terminals at the port’s Newark-Elizabeth complex.

Global is the port’s only major terminal that is seaward from the BayonneBridge, whose 151-foot vertical clearance is an obstacle to large ships. The Port Authority of New York and New Jersey plans to raise the bridge’s vessel clearance to 215 feet by the end of 2015.