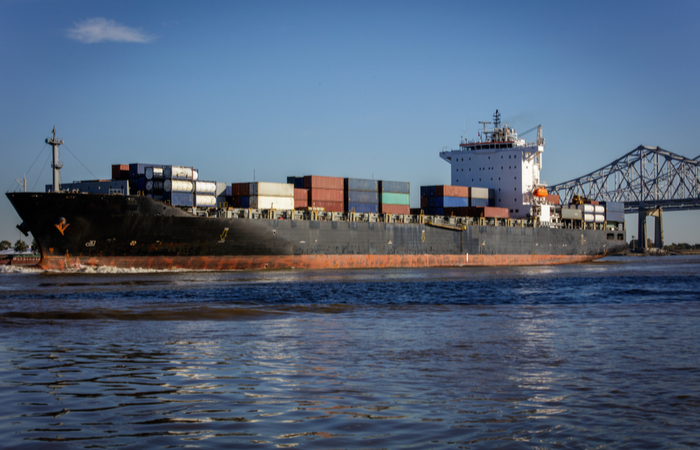 The advance of Tropical Storm Barry towards the Gulf Coast prompted the Port of New Orleans to opt to close Thursday afternoon, and one container vessel to skip the port, although the Port of Houston remained open. Photo Credit: Shutterstock.com.

The Napoleon Avenue Container Terminal at the Port of New Orleans is set to close by 2:30 p.m. Thursday as Tropical Storm Barry barreled toward the Louisiana coast with winds of 40 miles per hour (mph) that are expected to increase.

Port pilots handled their last outbound vessel around noon local time Wednesday, and the port will be operated by limited crews Thursday, the port said in a statement. Operations at the container terminal began winding down at midday. A cruise ship, the Carnival Valor, was diverted to the Port of Mobile and flood gate closures to cope with the storm will shut the New Orleans terminal Friday as well, the port said.

Jessica Ragusa, spokesperson for the port, said one container ship had skipped the port, and another was considering whether to do the same. “We have a few container ships outside the mouth of the Mississippi River just pushing their ETA’s back as we wait and see what the storm is going to do,” she said.

The Port of Houston said the United States Coast Guard has put the port on alert, but as of Thursday afternoon there had been no terminal closures or disruption at the port. The US Coast Guard has put the Port of Mobile on “whiskey” status, meaning all transfer of cargo must stop when winds reach 40 mph. Houston said it also is under whiskey status.

The National Hurricane Center (NHC) said in a 1 p.m. CDT update Thursday that Barry was located 90 miles south of the Mississippi River and moving west across the Gulf of Mexico at a slow 5 mph. The storm is expected to turn to the northwest and strengthen, making landfall along the Louisiana coast as a Category 1 hurricane late Friday or early Saturday. Rainfall of 10 to 15 inches is expected, and a surge of 3 to 6 feet is forecast to hit the coast around New Orleans, the NHC said.

“On the forecast track, the center of Barry will be near the central or southeastern coast of Louisiana Friday night or Saturday,” the NHC said.

Mike Steenhoek, executive director of the Soy Transportation Coalition, said the soybean sector had already been affected by the storm Wednesday afternoon, as pilots suspended all ships from entering the lower Mississippi River.

“As a result, soybean and grain exporters in the region will not be receiving or launching any vessels until the suspension has been lifted,” Steenhoek said in a statement. He added some soybean and grain exporters along the river had already declared “force majeure,” a contract clause that relieves them of fulfilling certain terms of the contract due to weather and other events out of their control.

The American Logistics Aid Network (ALAN) said that although it is early in the hurricane season, it is asking logistics professionals to be ready to help.

“There’s already significant flooding in South Louisiana, especially New Orleans,” said Kathy Fulton, ALAN’s executive director. “We have good reason to believe this could be the first significant hurricane of the 2019 season.”