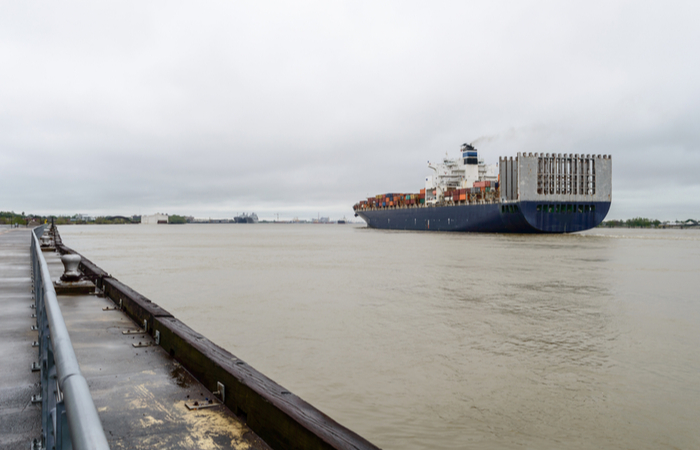 Four new cranes that are scheduled to arrive in 2020 at the Port of New Orleans are expected to improve efficiency at the fast growing port. Photo credit: Hugh R. Morley.

The Port of New Orleans approved a $55 million contract Thursday to prepare the terminal to install four new ship-to-shore cranes in a project expected to increase annual handling capacity by 20 percent.

The port authority board authorized Orion Industrial Construction, LLC to repair wharf substructure piles, demolish a warehouse, and extend the landside crane rail at the Napoleon Avenue Container Terminal, spokesperson Jessica Ragusa said in an email to JOC.com. The four 100-foot cranes are expected to arrive at the end of 2020 and will improve the terminal’s efficiency in loading and unloading cargo, she said.

The contract is the largest to date awarded in the ongoing $110 million expansion project at the port’s sole container terminal, which will increase its capacity from 840,000 TEU to about 1 million TEU, with completion expected by the end of 2020. The board is in the process of negotiating with Ports America a 50-year extension to the operator’s lease on the terminal.

The expansion to the Napoleon Avenue Container Terminal would maintain the current maximum ship size of 10,000 TEU that the port can handle, port officials have said in the past. The port, however, is mulling whether to build an additional terminal, which could handle vessels of 12,000 TEU or larger. A decision on how that plan will move forward is expected by the end of 2020.

The terminal upgrades are part of the preparation for a future cargo increase that real estate company JLL in a recent report concluded will increase by 200,000 to 250,000 TEU over the next five years, an increase of about 50 to 60 percent, Matt Gresham, the port’s director of external affairs, said in an email last month.

Cargo volumes increased 8.6 percent to 366,648 loaded TEU in the first ten months of 2019, according to PIERS, a JOC.com sister company within IHS Markit. That lagged the 13 percent year-over-year increase in the Gulf Coast as a whole but was an improvement over the 0.3 percent decline during the same period in 2018.

The port expects the opening of an 800,000-square-foot distribution center about 40 miles from the port by Medline Industries, Inc. to add to that cargo flow, Ragusa said. The company, a healthcare equipment manufacturer and distributor, and Louisiana authorities announced its plan for the center on Dec. 18.

One of the Port of New Orleans’s key strategies in growing cargo volume has been to attract distribution centers to the region, Ragusa said, noting that Medline imports over 100,000 TEU a year. The port, with two direct Asian services, is “well positioned to be the most strategic port for Medline’s new distribution center,” she said.