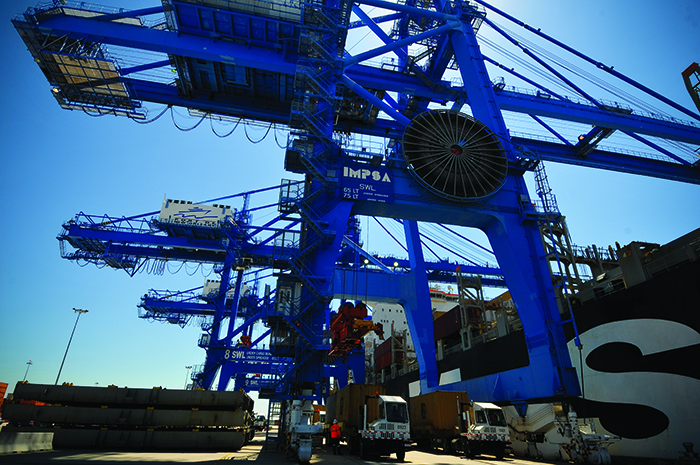 Standing 371 feet tall with booms up, Houston’s four newest container cranes made an impressive entrance when they arrived in Galveston Bay from China. Now being installed at the Barbours Cut terminal, they symbolize the changing face of container shipping in the US Gulf, in which volume has jumped nearly 15 percent this year.

Each of the new cranes, and three others due next year at Houston’s Bayport terminal, will span 22 rows of containers. That is more than enough for the container ships that now call at Gulf ports, but the bigger cranes are a sign of what port officials expect in the years ahead.

“We want to continue to stay ahead of demand,” said Roger Guenther, executive director at Port Houston, which annually handles about two-thirds of US Gulf containers and is working on a $1.2 billion expansion and modernization at Barbours Cut and Bayport.

Houston, New Orleans, and Mobile regularly handle ships with 6,000 TEU capacities, and Houston has had extra loaders this year with capacities in the 8,000 TEU range.

The US Gulf ports’ share of the nation’s container trade has been inching up for several years, rising from 6.32 percent in 2005 to 7.83 percent in 2016, according to PIERS, a sister product of JOC.com. This trend is on track to continue in 2017.

Through the first eight months of 2017, laden container volume through Gulf ports jumped 14.5 percent year over year, to 966,649 TEU. The increases were led by a 30.9 percent increase to and from Asia, reflecting the addition of two Panama Canal services in mid-2016.

Asia now accounts for 37 percent of the import cargo at Houston and also is the highest-volume trading region at Mobile, the second Gulf call for all three of the region’s Asia services. New Orleans also has picked up Asian volume with a new call last January on CMA CGM’s eastbound round-the-world route.

All three of the Gulf’s main container ports are lobbying carriers for additional Asian services. Carriers, however, have been cautious about adding a fourth vessel string without additional imports to balance high-volume but low-revenue exports.

Gulf ports have no shortage of exports, and volume is poised to grow further as production of synthetic resins ramps up at a string of multibillion-dollar plants being built along the Texas and Louisiana coasts to take advantage of low-cost natural gas feedstocks. US resin exports are expected to double, to about 1 million TEU annually, during the next several years.

Houston handles nearly 40 percent of US synthetic resins exports but faces competition from intermodal routings to other coasts, especially to the West Coast via Dallas-Fort Worth. Resin packaging centers also are being built to handle bulk rail shipments of resins to South Atlantic ports and New Orleans.

Most of the increased demand for US resin exports will come from Asia, primarily China. That is an advantage for West Coast ports, which have some three dozen weekly trans-Pacific services, and to Savannah and Charleston, which also have numerous Asian services, compared with the Gulf’s three Asian services.

Houston officials remain optimistic about increased resins volume, and are planning operational changes along with improvements and expansions at terminals. Those plans include night gate hours at Barbours Cut to complement the recent extension of gate closing times to 11 p.m. at Bayport, and a “fast lane” for truckers who check in online before arriving at the terminal.

The planned fast lane will use an online interface being developed between the terminals’ operating system and drayage companies. Truckers will be able to send booking numbers and other data in advance, instead of stopping to communicate it at the gate or at a near-gate kiosk. This could save two or three minutes per gate transaction at Bayport or Barbours Cut, which average a total of 7,500 truck moves per day, said Jeff Davis, Port Houston’s chief operations officer.

In another change aimed at resins, Texas lawmakers this year voted to authorize heavy-haul corridors around Houston. The new law allows gross weights of up to 93,000 pounds for six-axle trucks and 100,000 pounds for seven-axle trucks, and requires the heavier trucks to meet stringent safety standards. The changes will allow 40-foot containers to be fully loaded with resins, which was impossible under the previous 84,000-pound permitted limit.

Guenther said the port is on track to finish 2017 with 2.4 million TEU of full and empty containers, just two years after topping 2 million TEU for the first time. Through September, full containers totaled 1.5 million TEU, up 13 percent year over year, and overall volume including empties was 1.8 million TEU, up 11 percent, port authority statistics show.

Houston’s port operations were halted for several days by Hurricane Harvey’s floods, which caused silting that reduced channel depth by several feet. Several ships were diverted to other ports. But because most of the shipments eventually made their way back to Houston, the impact on cargo volume was slight.

Through September, port authority statistics show imports accounted for 52.3 percent of volume of full containers, and 50.4 percent of overall volume including empty boxes. Houston officials say that indicates empty containers will be available to be filled with resin exports, although some empties must be loaded aboard ships to balance heavy resin loads.

New Orleans ranks second in resin exports through all US ports and in overall container volume through the Gulf. Rising volumes of resins contributed to a 5.6 percent year-over-year increase in the port’s volume of full containers through August, to 272,831 TEU.

In the port’s latest fiscal year, total volume, including empties, exceeded 500,000 TEU for the third consecutive year. New Orleans’ volume is heavily weighted toward exports, led by resins and other chemical products. During the first eight months of this year, New Orleans’ laden exports exceeded imports by nearly 3-to-1, PIERS statistics show.

Import volume at New Orleans took a hit in 2016 when Chiquita’s weekly Central American service was lured back to Gulfport, Mississippi, after a two-year absence, but the port has more than offset that loss by landing four new container services in the last 16 months.

In addition, Bahri Shipping last month added a New Orleans call on its roll-on, roll-off service between the Gulf and the Middle East, the Indian subcontinent, and the Mediterranean.

Another new service is Seacor’s Mississippi River container-on-barge operation, which uses regular barge tows to move empty boxes from Memphis, an inland intermodal hub, to Baton Rouge, where the containers are filled with resins and barged downriver to New Orleans for export.

New Orleans officials are preparing to unveil a master plan to guide development of container and breakbulk facilities, which are concentrated on a stretch of the Mississippi River upstream from a pair of bridges. One option for breakbulk capacity that has been discussed is the former Avondale Shipyard site about five miles upriver.

Also coming soon is implementation of a deal under which the port will acquire a switching railroad, the city-owned New Orleans Public Belt, in exchange for two old breakbulk wharves at the edge of the French Quarter. The wharves will be demolished and used to expand a riverfront park.

At the Port of Mobile, the big news during the coming year will be Wal-Mart’s opening of a 2.4 million square foot import distribution center 10 miles from the port. The new facility will bolster the three current Asian services at Mobile, which now ranks second to Houston in import traffic among US Gulf ports.

The increase was driven by the mid-2016 addition of new services by Cosco and the 2M Alliance of Maersk Line and Mediterranean Shipping Co., and came despite the June cyber attack against APM Terminals, which operates Mobile’s container terminal.

APM Terminals is expanding the terminal, which opened in 2008 as a 95 acre facility. In July, two new super-post-Panamax cranes spanning 22 rows of containers joined a pair of 18-across cranes already operating at the terminal.

The new cranes are part of a $50 million expansion that also includes 20 additional acres of container storage and increased the terminal’s annual throughput capacity to 500,000 TEU. An additional 20 acre expansion is in the works.

Next door to the container terminal, the port last year opened a $50 million intermodal container transfer facility operated by APM Terminals. The intermodal yard’s primary user is Canadian National Railway, which has been marketing Mobile and New Orleans as “third coast” gateways for container shipments to and from the middle portion of the United States.

Mobile handles a wide range of cargo, including steel and other breakbulk cargoes, bulk shipments, and CG Railway’s railcar-on-barge service to and from Coatzacoalcos, Mexico. CG Railway moves about 10,000 carloads per year of commodities including chemicals and plastics, fructose and refined sugar, steel, and pulp and paper.

Earlier this year, rail operator Genesee & Western acquired a 50 percent stake in CG Railway from Seacor, which had acquired it from International Shipholding in 2016. Genesee & Western and Seacor are operating the rail-barge service as a 50:50 joint venture, and say they plan service enhancements.

The Port of Gulfport, Mississippi, had laden container volume of 98,987 TEU through August, a 22.5 percent year-over-year increase that reflected Chiquita’s return from New Orleans. Gulfport is nearing completion of a $570 rebuilding and expansion project after Hurricane Katrina leveled much of the port in 2015.

Port Freeport, Texas, which ranks fifth behind Gulfport in Gulf container volume with 41,858 TEU through August, has plans to expand container and warehousing facilities to go with a deepening of the port’s 45 foot channel to 55 feet. A&R Logistics is opening a warehouse at the port for packaging and transloading of resins from nearby plants.

Port Tampa Bay handled 29,184 TEU through August, a year-over-year increase of 14.7 percent, following the addition in late 2016 of a weekly Linea Peninsular service between the Florida port and the Mexican ports of Progreso and Altamira. The port is marketing itself as a gateway for refrigerated cargo and other shipments to points along the Interstate 4 corridor in Central Florida.

At nearby Port Manatee, container volume through April jumped 39.6 percent year over year, to 21,954 TEU, largely from Fresh Del Monte’s shift from refrigerated vessels to containers. Volume could increase further in 2018 with World Direct Shipping’s planned January addition of a second weekly sailing to Mexico.