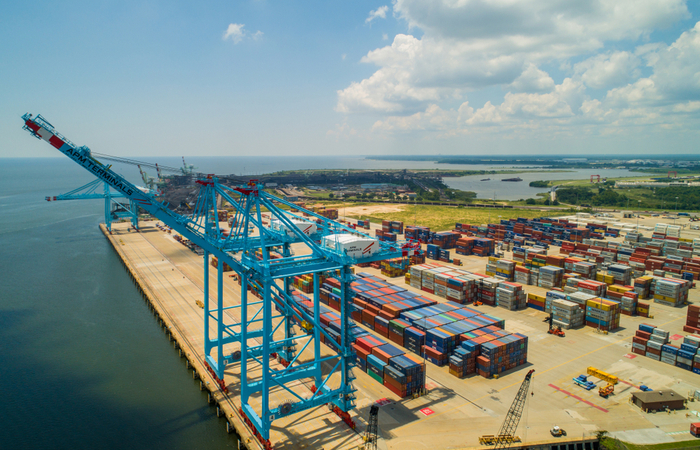 A berth extension that will enable the Port of Mobile’s sole container terminal to simultaneously handle two ships of more than 8,000 TEU is expected to provide greater flexibility in vessel scheduling as the Alabama port experiences strong double-digit growth in cargo volumes.

The extended berth, which handled its first vessels on March 23, is the final piece in a $50 million expansion project at APM Terminals Mobile that increased the terminal’s operating capacity 30 percent to 650,000 TEU, said Brian Harold, managing director of the terminal operator. That’s in addition to 200,000 TEU in capacity on its rail terminal, he said.

The expansion positions Mobile, the smallest of three main ports on the Gulf Coast, as readily able to handle a flow of large vessels as ports on the coast seek to attract shippers of Asian cargo away from ports on West and East coasts.

The increased capacity and berth length will enable the terminal to more easily accept bigger vessels, as they are increasingly used on the terminal’s four Asian routes and service to Europe, Harold said. The improvements could also potentially open the door to new services from Central and South America, for which there is “substantial demand,” as well as the Mediterranean and India, he said.

Before the berth expansion was completed, the terminal could not accept a second vessel greater than 4,000 TEU if it was already working a 9,600 TEU ship, Harold said. That meant a considerable amount of schedule juggling if vessels arrived late, or if an ocean carrier wanted to change its arrival window, he said.

“What the dock extension allows us to do is have significantly more berthing windows, to offer flexibility to carriers,” Harold said. “Right now, if somebody came and said we want to start a North-South service in Mobile, I could say: ‘You can come any day of the week, at any time.’”

The berth expansion is one of a series of recent terminal improvements designed to accommodate steady growth driven in part by strong import volumes from the regional automotive sector as well as rising resin and forestry exports, Harold said. In addition, the opening of a Walmart distribution center nearby in 2018 now generates 40,000 to 50,000 FEU in cargo annually, he said.

Cargo volumes through Mobile increased 25.9 percent last year to 340,279 loaded TEU over 2018, according to PIERS, a sister product of JOC.com within IHS Markit. That was more than double the 12 percent growth enjoyed by the Gulf Coast as a whole, the figures show.

The terminal in November completed an additional 10 acres of container storage space available for its rail terminal, for a total of 40 acres, and 20 acres of container storage space in the marine terminal, increasing it to 115 acres, Harold said Other improvements include a new gate system opened in April 2019 that increased the outbound gate from four to six lanes. The new system, along with an additional gate hour added at the start of the day, have lowered truck turn times by about 20 percent, Harold said.

While the terminal is still operating far below its new 650,000 TEU capacity, it is evaluating two additional expansion projects if cargo volumes require, Harold said. One would increase the terminal’s operating capacity to 1 million TEU, and the second would boost it to 1.5 million TEU, he said.

The Port of Mobile is also pursuing a dredging project that is tentatively scheduled to begin in the fourth quarter of 2020. It would deepen the port channel from 45 feet to 50 feet, enabling Mobile to handle vessels of 13,000 to 14,000 TEU.