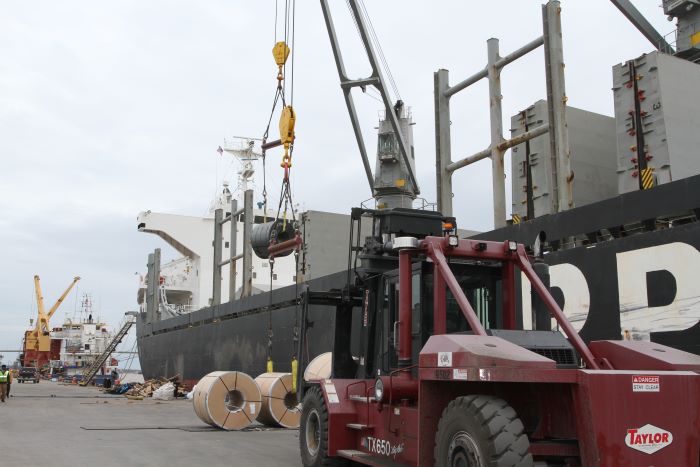 Although bustling with new projects and optimistic about increases in container trade expected thanks to Walmart’s massive, newly opened international distribution center only 15 miles away, the Port of Mobile, Alabama, has definitely seen some blowback from the trade wars.

“I’m adamantly opposed to this whole posture. I just see more harm than good,” Jimmy Lyons, director and CEO of the Alabama State Port Authority, told JOC.com. “We are thinking next election cycle, while [the Chinese] are thinking 50 years out. They will wait us out.”

Lyons has been with the Port of Mobile for 21 years, the last 20 of them as director and CEO. The most important of the changes he’s brought in his time can be summed up in one word: diversification.

“When I got here, we were totally dependent on coal and forest products,” he said. When he insisted on getting into the container business, his colleagues told him he’d lost his mind.

“We will never be a Houston or an LA/Long Beach — we don’t have the land or the population — but we’ve been successful since we opened the container terminal 10 years ago last October,” he said. The terminal, operated by APM, now has an expansion under way that will add 20 acres, for a total of 135, and extend the dock from 2,000 feet to 2,400 feet by 2020, allowing two post-Panamax vessels to be worked at once.

Retail giant Walmart in August opened a new 2.6 million-square-foot international distribution center (DC) in Irvington, Alabama, 15 miles from Mobile. The facility serves three regional DCs as of spring 2019 and should be serving seven in the Southeast during peak season, Lyons said. By October, he expects the DC to receive 50,000 containers annually.

“The big thing that’s done for the port,” he said, “is that we have a heavy base of export cargo, mostly lumber and chemicals, and we have struggled to have enough empty boxes to satisfy our needs. So, this has worked out for creating that balance.”

Hyundai Motors, near Montgomery, Alabama, and its suppliers, are another set of key importers for Mobile, bringing in about 400 containers a week, Lyons said.

Imports and exports were almost perfectly balanced from January through July of 2018, at 83,940 to 84,031. With the influence of the new Walmart DC and the trade-war tariffs taking hold in August 2018, however, the balance changed slightly from August through December, with the terminal handling 65,005 TEU of imports and 52,622 TEU of exports.

Five container services call the APM terminal at Mobile: CMA CGM’s Pex 3, eastbound from Asia through the Panama Canal and on through the Suez; Maersk Line/Mediterannean Shipping Co.’s trans-Atlantic TA3, which connects the US Gulf with northern Europe and Mexico; Zim Integrated Shipping Services/MSC’s CGX, a US Gulf service that transships at Kingston and Caucedo; and Maersk/MSC’s Lone Star service and Cosco Shipping Lines’ GME service, both trans-Pacific Panama Canal services.

Speaking about the suddenly ratcheted-up tariffs in May, Lyons said, “When they expand this list [of affected goods], it’s going to cost the taxpayers. Effectively the tariffs are a tax. The Chinese are not paying, and Walmart does not have those kind of margins. They can’t absorb it.”

Tariffs may affect prices more than volumes if importers cannot find cheaper alternatives for goods, he said. In other words, if there are no viable substitutes for Chinese-made goods, consumers will be forced to pay higher prices.

Lyons cited the example of MTC Logistics, which will begin construction of a cold storage facility near the port’s container terminal this summer. The facility will house “40,000 pallet positions,” Lyons said, “each pallet holding one [short] ton.” MTC will import fish, shrimp, pork, and concentrates, primarily from Asia, and create a pool of empty reefer containers for regional exports, “probably frozen chicken.” Due to the Trump administration's imposition of a 25 percent tariff on global steel imports last year, MTC’s construction costs have gone up by more than $3 million since the project was first planned, Lyons said.

The port’s next big project is a $60 million auto export terminal. Construction, on the site of a former bulk facility, will begin in the summer and the 57-acre terminal should be operational by summer 2020. Carriers and original equipment manufacturers (OEMs) haven’t committed to the facility yet, and they won’t until “they see the whites of our eyes,” Lyons said. The terminal will be operated by a concession paying fixed and variable rents to the port. The concession owner, Automobile Terminale, will be a joint venture between Chilean-owned SAMM Puertos and Argentina-based Terminal Zarate.

“Go on the docks after the ship arrives and you’ll see a whole field of these roll trailers,” Lyons said. “They assemble the hubs in Pensacola and then you see the loaded lowboy trailers coming back across the Cochrane Bridge [just north of the port] to I-65 to head west to wherever the wind farm is.” Airbus uses a chartered ro-ro service to bring in six planes’ worth of components monthly from Europe to its assembly line at Brookley Field, near the port.

Finnish stainless steel manufacturer Outokumpu also owns a mill in Calvert and imports and exports through Mobile. AM/NS serves automotive, construction, pipe and tube, service center, and appliance/HVAC industries in the North American Free Trade Agreement (NAFTA) market. Outokumpu Calvert’s technically advanced stainless mill produces the only 72-inch sheet and coil made in the NAFTA region. As another result of the tariffs and various retaliatory measures, the port has lost business shipping steel coils into Europe and stainless steel into Mexico, where it was finished and used in appliances that were then sold back into the United States.

“We’ve seen some very definite impacts,” Lyons said. “I remain very much opposed to our trade policies and the way we are conducting them. I don’t think it’s good for our economy. It may be good for a few segments — some of our steel producer customers like it — but for anyone who uses steel, it’s bad.”

Forest products, a traditional export cargo for the entire southeast, including Mobile, continues to shift into containers, Lyons said. “We still have one breakbulk service from northern Europe (G2 Ocean) that takes back forest products ... [but] traditional cargoes like wood pulp are going into containers. We used to see a lot of little ships that went into places like Venezuela and carried wood pulp. We just don’t see that at all any more. The only lumber we still see in breakbulk form is into the Caribbean basin.”

Mobile, built in 1928, struggles with the challenges of being a relatively old port, hemmed in by the city to the west and an immense river delta to the north. Some general cargo piers that need rehabbing still have wooden bulkheads, so in order to utilize them, the docks will have to be taken up and the pilings redriven, Lyons said.

Working to standard will cost $40 million plus, “and you have to do that with cash,” Lyons said. “You can’t finance it. When you put together a new deal — a steel terminal, a ro-ro terminal — you can take that to the bonding committee and say we’ll pay this off with cash flow,” but ports can’t do that with maintenance and rehab projects.