US West Coast gets creative to handle mega-ship pressure

US West Coast gets creative to handle mega-ship pressure 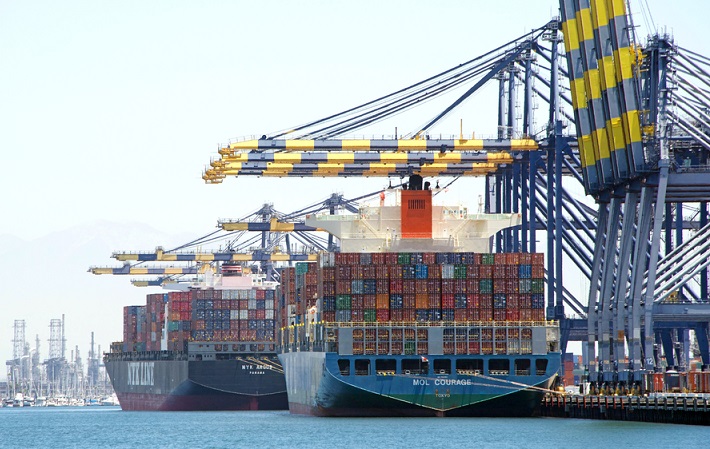 With container exchanges of as much as 10,000 per vessel call, as is the case with mega-ships, the landlord West Coast ports have assumed the role of facilitators, bringing together ocean carriers, terminal operators, equipment providers, truckers and railroads to implement improved cargo-handling processes. (Above: The Port of Los Angeles.) Photo credit: Shutterstock.com.

“This is the reality today. We must focus on service levels to make sure terminals are fluid,” Steve Balaski, senior business development manager for containers at the Northwest Seaport Alliance of Seattle and Tacoma, told the Western Cargo Conference of freight forwarders and customs brokers Saturday.

With container exchanges of as much as 10,000 per vessel call, as is the case with mega-ships, the landlord West Coast ports have assumed the role of facilitators, bringing together ocean carriers, terminal operators, equipment providers, truckers, and railroads to implement improved cargo-handling processes. Furthermore, they are investing port money to jump start portwide projects that improve terminal fluidity.

The Port of Los Angeles partnership with GE Transportation to develop the information portal known as the Port Optimizer is the most ambitious effort yet by a port authority to test and implement a startup project that is designed to improve vessel, yard, and gate productivity. “The Port of Los Angeles was the venture capitalist,” said Marcel VanDijk, marketing manager, citing the port’s $30 million investment in the Port Optimizer.

The Northwest Seaport Alliance each peak season partially funds an extended-gates program to relieve gate congestion. Some terminals are also keeping their gates open during the noon lunch to prevent the truck bunching that occurs when gates are not open continuously for eight hours, Balaski said.

The Seattle-Tacoma gateway has also teamed with E*Dray, beneficial cargo owners (BCOs) and truckers to build container piles of sufficient size so truckers can call in a continuous stream, with each truck taking delivery of the next container from the top of the pile.

The efficiencies and economics of peel-off piles are compelling, said Read Kidd, E*Dray president. In the traditional, random-access model where a trucker takes delivery of a specific container for a specific BCO, containers in the stack must be shuffled around, often requiring 6 to 8 moves to get to the designated container, Kidd said. The rubber-tire gantry crane used to move the containers can handle 14 to 16 moves per hour. The peel-off pile generates one move to deliver the container to the next trucker in line, and the top-pick equipment that is used can do about 50 moves per hour, he said.

West Coast ports are also adopting street turns of inbound containers in order to reduce the number of return moves to the terminals with empty containers. E*Dray matches an importer with an exporter in the region. When an importer unloads a container, the exporter retrieves the empty outside of the port area, thereby reducing gate congestion at the marine terminals.

The Port of Oakland has facilitated stakeholder optimization groups that have developed trucker appointment systems for the terminals, chassis pools, and extended gates, said Ron Brown, maritime marketing and commodities representative. Oakland is the first North American port to develop an extended gate program funded by a flat fee charged on truck moves in both the day and night shifts. Los Angeles-Long Beach and Vancouver, Canada, which have used a congestion-pricing model of charging fees on daytime moves in order to encourage use of night gates, appear to be moving toward a lower, flat fee model similar to Oakland’s program.

Oakland also worked with software developer Advent Intermodal and agricultural interests in the San Joaquin Valley to establish an inland depot at French Camp, about 100 miles from the port. Agricultural products are trucked to French Camp and then shuttled to the port, saving exporters a lengthy truck haul from the Central Valley all the way to the port.

Los Angeles and GE Transportation the past two years have been working on a pilot project to develop and expand the Port Optimizer, a system of systems that serves as a single information portal for shipments from the time the container is stowed on the vessel in a foreign port, continuing on to Los Angeles, through the marine terminal and on to the receiver’s warehouse. The optimizer was tested last year at a single terminal in Los Angeles, and this year it has been extended to all terminals in Los Angeles and three in Long Beach.

Brian Hill, digital solutions director at GE Transportation, said the Port Optimizer is not a terminal operating system, but rather a system of systems that connects the systems of ocean carriers, terminal operators, equipment providers, truckers, railroads, and BCOs through a single information-sharing portal.

Hill said functions include better stowage of containers on vessels to streamline delivery of containers in Los Angeles-Long Beach, notifications to BCOs and truckers on container dwell times, the pending last day of free time for each container, information on chassis availability at each terminal, making trucker appointments, the status of Customs holds on containers and whether a terminal is accepting the return of empty containers. Additional functionalities will be rolled out in “two-week sprints,” Hill said. Programs can be customized to the individual needs of each stakeholder, he said. GE Transportation is not yet ready to determine a pricing structure, which could involve a subscription model for large-volume users or a transactional fee for infrequent users as possibilities, Hill said.

VanDijk said that although the port was the venture capitalist behind the Port Optimizer, “this will be a GE Transportation product, not a port product,” he said.