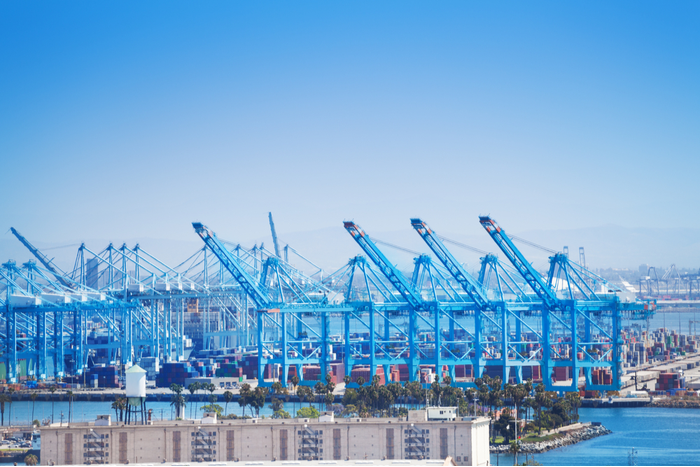 Beneficial cargo owners are facing the specter of detention penalties as terminals in Los Angeles and Long Beach run out of space to store empty containers during the coronavirus disruption. Photo credit: Shutterstock.com.

Shippers and truckers are raising the alarm on how blank sailings linked to the coronavirus disease 2019 (COVID-19) will cause a rash of detention penalties between $100 to $200 per day if it remains difficult to return empty containers to terminals in Los Angeles and Long Beach.

While Ocean Network Express (ONE) is waiving detention fees, according to a Feb. 25 advisory from the company, other steamship lines haven’t provided such amnesty, say motor carriers. Container lines may be reluctant to waive such fees, considering the volume slump caused by COVID-19 is costing them $300 to 350 million weekly, according to consultancy Sea-Intelligence Maritime Consulting.

There are limits to the leniency carriers will show, however, with ONE saying it won’t reimburse for storage or escalating fees. That resistance is causing trucker and cargo owner frustration about being penalized for factors they argue are beyond their control.

“From an administrative standpoint, the other steamship lines are making it an onerous process to dispute detention/per diem right now,” said Robert Loya, vice president of CMI West, a drayage provider in Southern California owned by NFI Industries.

Most of the container terminal operators in the Los Angeles-Long Beach port complex began to manage the return of empty boxes last month in order to avoid yard congestion.

“If you fill up a terminal with empties, you don’t have enough space to handle the containers that are coming in. That’s the issue,” said Ed DeNike, president of SSA Containers.

Some terminals last month began notifying beneficial cargo owners (BCOs) they would only issue appointments to return empty containers if the trucker retrieved a full container, known as a dual transaction. Other terminals began to refuse returns of all empty containers. Several terminal operators told JOC.com that is necessary because of the reduction of outbound vessel capacity needed to return the empties to Asia, and available terminal space is becoming scarce.

Blank sailings have also reduced import volumes so much that work shifts in Los Angeles-Long Beach have been canceled over the past couple of weeks, ostensibly to save on longshore labor costs. According to a schedule of gate closures shared with JOC.com, individual terminals in Los Angeles-Long Beach have announced 25 day or evening work shifts that will be canceled this week from Monday through Friday.

The semantics game on fee waivers 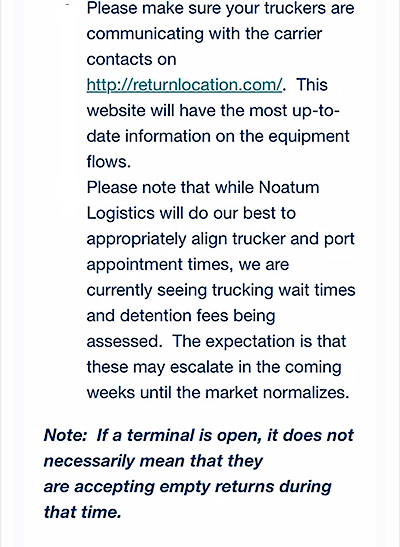 During the Federal Maritime Commission’s investigation into detention and demurrage, ocean carrier sources told JOC.com it’s common to extend free time when a terminal is completely closed. If a hurricane shuts down a terminal, for example, a BCO shouldn’t lose a free day to pick up or return containers.

The coronavirus detention discussion, however, is more complicated because restrictions, such as a dual transaction requirement, are different than closures. Even eliminating one shift isn’t the same as a shutdown; limited access is different than no access.

Even if one terminal isn’t accepting an empty, that doesn’t mean an ocean carrier can’t push back on detention.

“That assumes it’s the only location taking the empty [box]. If the steamship line gives you three locations and one is closed or not taking the empty, you’ve got two other options,” Loya said. “What is happening right now, though, is the first may not take the empty, the second has no available appointments, and the third requires a dual transaction.”

BCOs and truckers can argue that it’s unreasonable to charge detention/per diem. An ocean carrier, however, can counter that drayman has a responsibility to book an appointment before the slots fill up, or to schedule a dual transaction, thus penalties shouldn’t be waived.

What a BCO can do to dispute detention/per diem penalties depends on the contract. If the ocean carrier bills the motor carrier under merchant haulage, then the Uniform Intermodal Interchange and Facilities Access Agreement (UIIA) is an avenue to resolve the dispute. If the ocean carrier bills the BCO under a door delivery, the UIIA doesn’t apply.

Lori Fellmer, vice president of logistics and carrier management with BassTech International, recommends BCOs address disruptions in their service contract. Even if the coronavirus is an extraordinary event, there have been enough disruptions in Southern California that a BCO should negotiate the issue.

“Not every BCO has the leverage to get language into a contract,” Fellmer said. “But you can have these conversations with your steamship lines, even if it’s not in your contract. Unfortunately, a steamship line can, at any moment, publish something in a tariff that puts the BCO on the hook if all else fails.”

Keeping documents is also crucial to fighting a detention/per diem penalty, sources say. They recommend saving emails, taking screenshots if a portal shows no available appointments, and following up phone calls with an email summarizing the contents of the conversation.

“We always ask the recipient in a follow-up email to let us know if there is anything we misunderstood,” said Rachael Acker, logistics manager with Wolverine Worldwide, Inc. “That way, both sides have a common understanding of what was discussed on the phone call.”