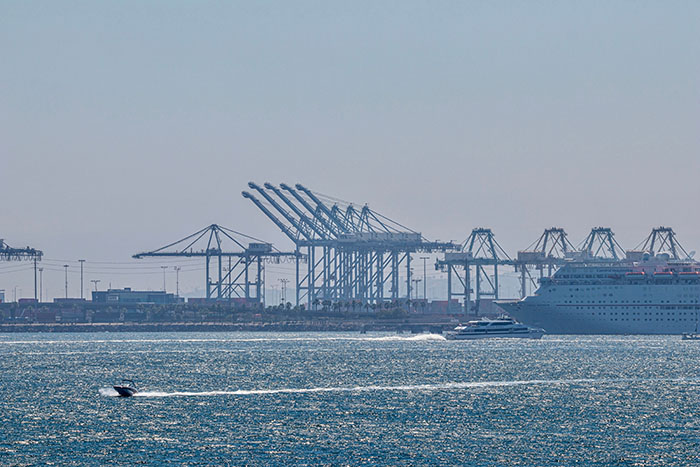 The Port of Los Angeles has already met or exceeded its 2023 goals for reducing harmful diesel emissions, but will continue to promote zero- and near-zero-emission technologies to achieve further reductions in the coming years, according to the port’s inventory of air emissions report for 2018.

The 2018 emissions inventory report shows Los Angeles has met or exceeded its 2023 goals in all categories of so-called health-risk pollutants. Those goals are a 77 percent reduction in diesel particulate matter, a 93 percent decline in sulfur oxide, and a 59 percent decrease in nitrogen oxide emissions.

The GHG goals are more aggressive than those set by the International Maritime Organization’s (IMO's) initial goals for decarbonizing ocean-going vessels, which call for a 40 percent reduction in GHG emissions from 2008 levels by 2030, and a 50 percent reduction by 2050. A coalition of 70 public and private organizations from 14 countries — including Maersk Line, the world’s largest container carrier, and Kuehne + Nagel, the largest international ocean freight forwarder — on Monday announced a newly formed coalition that aims to develop a commercially viable zero-emission cargo ship by 2030 in order to meet the IMO goals. The announcement came on the same day as a separate pledge from K + N to ensure all its less-than-container-load (LCL) shipments will be carbon neutral from 2020 onward. Maersk has previously committed to having a fully decarbonized fleet by 2050, not through offsets.

The largest United States container port is collaborating with the neighboring Port of Long Beach, which last week published its own 2018 inventory of emissions, to deploy zero-emission technologies in the port complex. The Long Beach report also noted that the port has attained or surpassed the standards set for 2023.

The ports’ joint Clean Air Action Plan of 2006 sets goals of achieving zero emissions from cargo-handling equipment (CHE) by 2030, and heavy-duty trucks by 2035. The ports are encouraging the development and adoption of the cleanest commercially available technologies. In conjunction with state and federal agencies, the ports are providing grant funding and participating in pilot projects for cargo-handling equipment, vessels, trucks, locomotives, and harbor craft.

Los Angeles said it is leading or participating in 16 projects to demonstrate zero- or near zero-emission technologies and alternate fuels for cargo-handling equipment, such as forklifts, yard tractors, top handlers, and rubber-tired gantry cranes (RTGs). Pilot projects also include emissions-control equipment for vessels and harbor craft.

The CAAP emission reductions are benchmarked from levels recorded in 2005. “Even as cargo has increased 26 percent since the baseline year of 2005, we’ve sustained the remarkable clean air gains we’ve made since then,” said Gene Seroka, executive director of the Port of Los Angeles.

At many ports, container lines are deploying newer, larger, cleaner vessels, which enable them to carry growing container volumes with fewer vessel calls and lower per-container emissions. Ships are the largest single source of harmful non-GHG emissions, generating more than 30 percent of the pollutants in Los Angeles, according to the port. Ongoing strategies to reduce emissions from ships include the port’s vessel-speed reduction program, plugging vessels at berth into shoreside electric power, use of cleaner-burning fuel, and offering incentives for deploying newer, cleaner vessels.

Achieving zero emissions from trucks will be challenging, and the ports of Los Angeles and Long Beach have therefore set a target date of 2035. The intention is to encourage transition of the harbor drayage fleet to battery-powered vehicles as they become commercially feasible.

Technology developments for CHE have produced a number of options for emission reductions. The ports’ joint 2018 Feasibility Assessment for CHE, which was also released last week, stated there are about 3,500 cargo-handling units in the port complex, and 70 percent are powered by relatively large diesel engines that emit high levels of air pollutants. The ports’ key targets for reducing diesel emissions from CHE are for yard tractors, top handlers, rubber-tired gantry cranes, and large-capacity forklifts.

The goal is to transition many of those units to zero- or near zero-emission models over the next three years, based upon commercial availability, technical viability, operational feasibility, availability of infrastructure and fuel, and economic workability. Near-zero-emission fuels such as natural gas, and zero-emission technologies such as battery-powered units and grid-electric powered units, are either in production or are well along the development curve, which allowed the ports to set a more ambitious goal for zero emissions from CHE by 2030.