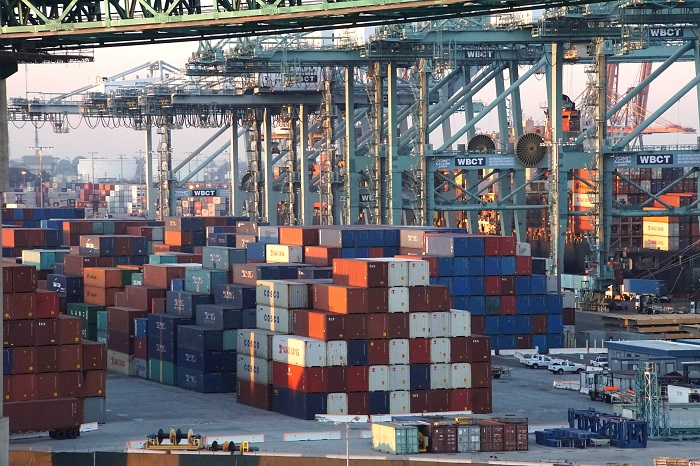 The chief executives of the two largest US container ports, which are on track this year to handle a combined total of more than 16 million TEU, conceded that terminal congestion and equipment shortages are plaguing the harbor. (Above: Containers stacked at the Port of Long Beach.) Photo credit: Shutterstock.com.

With container dwell times at the highest level in two years and truck turn times higher, the ports of Los Angeles and Long Beach promise relief within six months.

"We’re going to clean this up,” Gene Seroka, Los Angeles executive director, told a dinner meeting of the Harbor Transportation Club Tuesday. “Yes, we have issues. We’re shooting ourselves in the foot, but we also have potential,” said Mario Cordero, Long Beach executive director.

The Pacific Merchant Shipping Association (PMSA) reported Wednesday that the average container dwell time in November in Los Angeles-Long Beach was 3.5 days, compared with about 2.5 days last spring. Some 13 percent of the containers had dwell times of five days or longer, compared with about 5 percent last spring. “Terminals rely on containers getting picked up in a timely manner in order to handle more containers efficiently,” said Jessica Alvarenga, PMSA’s manager of government affairs. She said it is “absolutely critical” that container dwell times be reduced to the normal level of less than three days.

Similarly, the Harbor Trucking Association (HTA) reported Wednesday that the average truck turn time in the harbor was 90 minutes in November, up from about 70 minutes before container volumes suddenly spiked in July. Container volumes have remained elevated since then. Weston LaBar, CEO, said that although there was ample truck capacity to handle container volumes earlier in the year, an artificial capacity shortage has developed because truckers are spending excessive time at the terminals.

The chief executives of the two largest US container ports, which are on track this year to handle a combined total of more than 16 million TEU, conceded that terminal congestion and equipment shortages are plaguing the harbor. They proposed about a dozen action items, which included long-term programs. A trucker attending the meeting called that point out to the port directors. “Most of what you are talking about is going to take one to five years. What about the next six months — what are we going to see?” he said.

Seroka responded that beneficial cargo owners (BCOs) and truckers in Southern California should anticipate a universal trucker appointment system, a pilot program to establish container piles designated for delivery to a yet-to-be-chosen destination in the Inland Empire 50 miles to the east, designing a perimeter delivery system to pre-positioning containers for which appointments have been made so they are available for immediate delivery to truckers, and a chassis inventory system detailing where the equipment is in real time.

Since these action items all impact truckers in some way, they point to the weakest link at the ports. Cordero said gate times are the best measurement ports can use to measure efficiency. The latest statistics posted by the HTA show that turn times have deteriorated rapidly the past two months. During the first half of 2018, average turn times for the 12 container terminals in Los Angeles-Long Beach in minutes were in the range of low to mid-70s. When container volumes accelerated in July, average turn times increased to about 80 minutes, and in October and November, turn times in the port complex averaged 90 minutes.

LA-LB, like many North American ports, coping with unconventional year

Los Angeles-Long Beach is experiencing many of the same service problems that most major North American ports are grappling with in an unconventional year in liner shipping. The year has been marked by uninterrupted front-loading of imports spawned by the US-China trade war, large container exchanges from mega-ships, late vessel arrivals due to weather events and congestion in Asian ports, and an unprecedented number of extra-loader vessels that arrive at the terminals with only one or two weeks' advance notice and result in vessel bunching at the terminals.

Seroka said Los Angeles has had six consecutive months of 800,000-plus TEU volumes. Carriers since November have deployed or are scheduled to deploy 29 extra-loader vessels to Los Angeles-Long Beach. Some lines have replaced vessels in their regular weekly strings with larger ships. Maersk Line this week is working its second vessel of 18,000-TEU capacity. The previous call by Eleonora Maersk produced a North American record container exchange of 27,846 TEU.

Seroka added that these developments are unfolding in a port complex through which more than 200,000 BCOs ship their freight. Fifteen major shipping lines call at 12 container terminals that are served by the three major chassis providers and two western railroads. The 12 marine terminals in aggregate handle 2,000 container moves per hour and 60,000 truck moves per day, he said. Some vessel operators do 100 percent discharge and reloading of containers in Los Angeles-Long Beach before returning directly to Asia.

A unique port complex requires unique productivity measures to handle the crush of vessel, truck, and rail activity, the port executives said. However, since each sector of the supply chain has its own requirements, and those individual needs sometimes conflict with those of other sectors, it is essential that the ports include all stakeholders in discussions before new measures are implemented, they said.

It is becoming apparent that the storage of chassis takes up too much space at marine terminals. Removing chassis from the terminals and repositioning them at near-dock sites would free up as much as 80 acres of terminal space that could be devoted to cargo handling, Seroka said. The ports this past year identified several parcels in the harbor area that could be devoted to chassis storage and repair, and the intent is to have all chassis inspected by members of the International Longshore and Warehouse Union (ILWU) so they are roadable and can enter and exit marine terminals without further inspection, he said.

The ports are continuing to work with portal designers including GE Transportation and Advent Intermodal Solutions to design a single window for gathering and disseminating information on shipments from overseas origins to and through the marine terminals in Los Angeles-Long Beach. Having information on vessel stowage and the container availability date more than a week before the vessel arrives in the port will allow BCOs, truckers, railroads, and equipment providers sufficient time to make appointments and marshall their equipment and labor needs.

The ports are also acting as facilitators, bringing the terminals, BCOs, and truckers together to further develop efficiency-enhancement programs such as peel-off piles, container dray-offs to near-dock sites for overnight storage, and match-backs of empty import containers with export loads. The ports are expanding their on-dock rail capacity with the goal of eventually handling as much as 50 percent of the container volume on-dock. Cordero said that with East Coast ports implementing measures to speed containers from Asia to inland US markets as quickly as or quicker than the total transit time via intermodal rail from the West Coast, Los Angeles-Long Beach must improve the efficiency of handling intermodal cargo in Southern California.

Seroka said the ports are looking at locations in the Inland Empire for a pilot project in which containers destined for that hub of distribution facilities can be segregated into piles at the marine terminals and moved quickly to the inland site 50 miles from the harbor in a peel-off type of arrangement. Similarly, they intend to pilot a perimeter delivery system in which containers for which a trucker appointment has been made can be moved to a convenient location in the terminal to provide quick turn times for truckers.

The directors said that since all 12 terminal operators now require trucker appointments, the ports intend to move to a universal appointment system so truckers do not have to deal with 12 different systems. This will also make it easier for truckers to arrange dual transactions and change appointments in real time when exceptions occur.

Chassis shortages due to the hoarding of equipment by some terminal operators, and BCOs’ increasing use of import containers and the chassis they are resting on as an extension of their warehouses, is one of the biggest contributors to port congestion. The pool of pools operated by the three major equipment lessors has 68,000 chassis in southern California, yet truckers each day encounter shortages throughout the harbor. One terminal was reportedly holding on to 7,000 chassis on a recent day. The ports intend to develop an inventory system to pinpoint the terminals, rail yards, and warehouses where chassis are sitting idle.

Although the port authorities can serve as facilitators, individual terminals must also take actions to address their individual needs. Total Terminals International (TTI), the largest terminal operator in Long Beach, runs 11 shifts each week — five weekday gates, five night gates, and one Saturday day gate — said Daniel Bergman, vice president of Long Beach operations. TTI, which handles about 11,000 to 12,000 gate moves per week for imports, has opened up more slots for trucker reservations. TTI reaches out to truckers, BCOs, and the railroads on a regular basis to plan for events before they occur, such as the peak-season cargo peaks. However, the stakeholders must also do their part, such as showing up for the appointments they make. TTI numbers show that truckers do not show up for about 35 percent of the appointments they make, he said.

The measures that are being implemented by ports and terminal operators are designed to reduce container dwell time and thereby free up space so the yards do not get overwhelmed by imports. When that happens, and truckers say it has been happening all too much this autumn, the terminals can no longer accept the return of empty containers, which has become a sore point for BCOs and the trucking community. Bergman said operators must live with the difficult reality that when their terminals reach 82 percent of capacity, they are effectively out of space and have to shut down receipt of empties until the import containers are cleared from the yard.

The port directors said the problems being experienced throughout the harbor can only be solved if stakeholders meet regularly as a group, with each industry freely discussing its challenges and being willing to make operational adjustments for the good of all participants in the supply chain. With the port authorities serving as facilitators, all of the stakeholders must participate in developing and adhering to business rules that will govern how the port complex operates, Seroka said.

Please note below article in