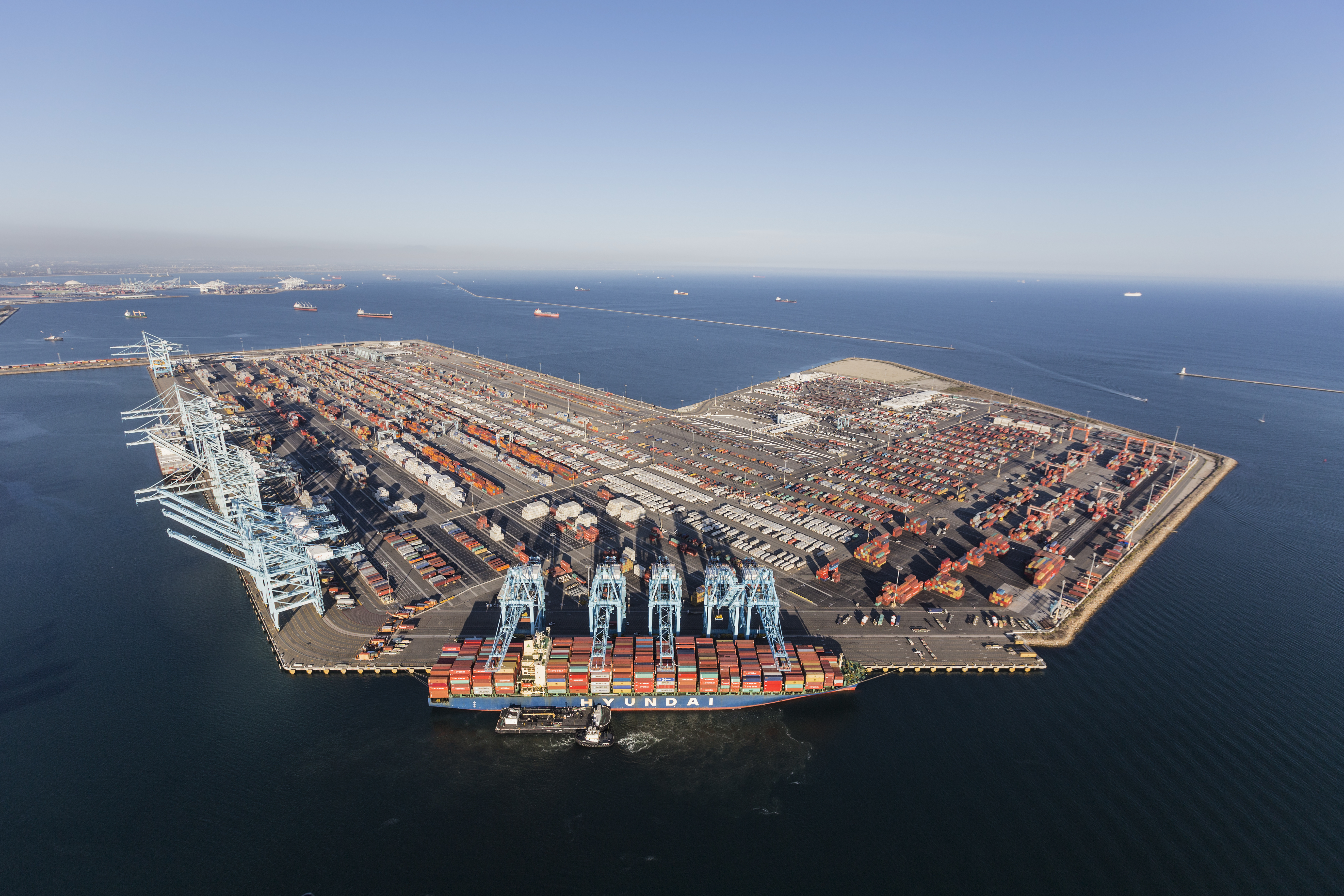 APM Terminal’s pilot project at its Pier 400 terminal in Los Angeles will be the first in North America to use autonomous straddle carriers. Photo credit: Shutterstock.com.

APM Terminals’ plan to use unmanned straddle carriers at Los Angeles highlights a new path for other US West Coast marine terminals to automate in order to better handle mega-ship calls without incurring the higher upfront investment costs of existing automated terminals.

APM’s pilot project on a 100-acre parcel at its Pier 400 terminal will be the first in North America to use autonomous (unmanned) straddle carriers, which bring lower upfront costs because they don’t require extensive modifications to existing terminals. The auto-strads can operate on existing terminals, and will therefore be more scalable than other automated terminals, which must be reconfigured with tracks for automated stacking cranes and sensors for automated guided vehicles. The existing model of rail-mounted automated stacking cranes (ASCs), which dates back to the opening of the ECT Delta terminal in Rotterdam in 1993, requires large container volumes to recover the investment.

“It is interesting that after a wave of terminals being built on the same concept, now terminal operators are looking to the left and right and are willing to try other concepts,” said Felix Kasiske, managing director and  partner at HPC Hamburg Port Consulting.

If it were not for opposition from labor organizations, there would be more automated terminals throughout the Western Hemisphere, Kasiske said. The International Longshoremen’s Association on the East and Gulf coasts will not allow the use of automated horizontal transportation such as auto-strads or automated guided vehicles. However, the semi-automated terminals in New York-New Jersey and Virginia have incorporated efficient automated stacking cranes in the yards. The ASCs allow terminals to increase density and capacity, and they can operate round-the-clock. Containers are moved from ship-to-shore cranes to the stacks, and to and from the street trucks, by yard tractors driven by longshoremen.

The 2008 West Coast longshore contract between the International Longshore and Warehouse Union and the Pacific Maritime Association gave terminal operators the right to fully automate their facilities at will, in return for a significant boost in ILWU pensions up to $95,460 a year. Nevertheless, the union is fighting APM’s plan to deploy auto-strads. Although the ILWU can not block the automation effort via the coastwide contract, dock workers in January asked a Los Angeles Harbor Commission meeting to vote down the construction permit that must be granted by the port and the California Coastal Commission for the project to begin. The commission delayed its vote until a future meeting.

There are only two "fully" automated terminals in North America. Even in these facilities, however, only yard operations are automated, not ship-to-shore cranes. LBCT’s Middle Harbor facility in Long Beach and the TraPac terminal in Los Angeles, both of which opened in 2015 and are in their final phases of development, are built on the ECT model that requires installation of tracks for the ASCs and sensors imbedded in the terminals for ground transportation. Once the infrastructure is built, it is essentially a permanent fixture. Middle Harbor will end up costing about $1.4 billion in infrastructure work and equipment purchases, and TraPac’s automation efforts will cost more than $700 million.

APM Terminals, on the other hand, will deploy automated rubber-tired straddle carriers at Pier 400 that can navigate on existing pavement. The number of straddle carriers to be purchased can start small and be scaled up according to need. Since the straddle carriers don’t require rail tracks, the upfront cost will likely be about half of the investment at Middle Harbor, said Larry Nye, who is in charge of port planning at Moffatt & Nichol. And since the units are completely mobile, the terminal operator can always move them elsewhere if satisfactory results are not achieved, he added.

Although APM will begin with diesel-powered straddle carriers, the manufacturer, Kalmar, has developed a hybrid diesel/electric strad and is working on a zero-emission battery-powered auto-strad. If the zero-emission technology proves to be commercially viable, the units being deployed at Pier 400 can be retrofitted and operated as zero-emission equipment.

Development of zero-emission technology will be crucial for the 12 container terminal operators in Southern California to adhere to the Los Angeles-Long Beach Clean Air Action Plan, which sets a goal of 100 percent emission-free cargo handling equipment by 2030. Nye said the CAAP will drive other terminal operators in the ports toward automation because electric and battery-powered cargo-handling equipment will probably be necessary to achieve zero emissions. Once such equipment is commercially viable, it will be up to individual operators to decide whether deploy autonomous versions, as will likely be the case on the West Coast, or continue to have them be driven by longshoremen, as will likely happen on the East Coast.

On both coasts, however, anticipation of labor friction is inherent in decisions by terminal operators to automate. The use of any type of unmanned cargo-handling equipment, be it auto-strads, automated guided vehicles (yard tractors) or automated stacking cranes, eliminates dozens of longshore jobs at each terminal. Nye said terminals assign 9 to 10 yard tractors for each ship-to-shore crane. Indeed, reducing labor costs with unmanned equipment is one of the objectives of any terminal operator that decides to automate its operations.

In California, with its strict state and local environmental requirements, reducing emissions is also a key consideration in the terminal planning process. Because electrified and battery-powered cargo-handling equipment meet the goals of the CAAP, Nye said terminal operators looking to replace equipment are asking themselves, “I have to spend a bunch of money on equipment in the next 11 years, so is this the time to consider automation?” Since existing diesel-powered auto-strads can be retrofitted at a later date with battery power, a terminal’s investment in auto-strads will allow the operator to kill two birds with one strad, benefitting from reduced labor costs while also achieving emission-reduction goals, he said.

There are operational differences between the two coasts that make the use of automated guided vehicles or auto-strads difficult to incorporate at East Coast terminals, said Rich Ceci, senior vice president of technology and projects at Virginia International Terminals, which sports two semi-automated terminals. Ceci also directed the semi-automation project at Global Terminals in New Jersey.

Unlike West Coast terminals, which tend to be financially affiliated with ocean carriers and serve only a few lines, East Coast terminals serve a number of carriers. That makes the sorting and delivery of containers more complex and far less suited for automated horizontal ground transportation, Ceci said. The sortation of containers at West Coast ports is simpler and, therefore, more easily handled in an automated environment, he said.

There are only a few operating models that deploy the mobile auto-strad technology APM intends to use, most notably Patrick Terminals in Brisbane and Sydney, Australia. The auto-strads move containers between the ship-to-shore cranes, among the stacks and between the street trucks and the stacks. The key factor in improving efficiency of any automated terminal is that it separates vessel traffic from street traffic by repositioning the container stacks perpendicular between the vessel and the gate. This decoupling not only improves safety but also allows truckers to move into and out of the terminals more quickly because the container transfers take place close to the gate.

Since Middle Harbor in Long Beach has been in operation, truck turn times have averaged 40 minutes or less, compared to 80 minutes-plus for the port complex as a whole, according to monthly figures posted by the Harbor Trucking Association. Ceci said semi-automated terminals on the East Coast also have good truck turn times. Turn times in Virginia, for example, likewise average less than 40 minutes, he said.

One disadvantage of the auto-strads compared to the automated stacking crane model at Middle Harbor and TraPac is that the equipment only allows containers to be stacked three high in the yard, compared to four or five high with the larger, rail-mounted ASCs, so some density is sacrificed. This is not considered to be an issue, however, for a large terminal like APM’s 440-acre Pier 400 terminal in Los Angeles.

Although automated and semi-automated terminals result in improved productivity in the terminal yard and at the gate, the productivity for ship-to-shore cranes is not improved. According to the Pacific Maritime Association, container moves per hour in Los Angeles-Long Beach have consistently averaged about 27-28 moves per hour since 2010, except for when labor strife in 2014-15 during coastwide contract negotiations slowed operations considerably. By comparison, ports in the South Atlantic report that their non-automated terminals average closer to 40 moves per hour.

The move toward automation is expected to develop the fastest in Los Angeles-Long Beach, given the ports’ large container volumes -- more than 17.5 million loaded and empty TEU last year, according to port statistics -- and their CAAP emissions reduction goals. However, if the auto-strad model proves to work efficiently on the 100-acre site at Pier 400, it could be scaled for the demands of other terminals up and down the West Coast, Kasiske said.