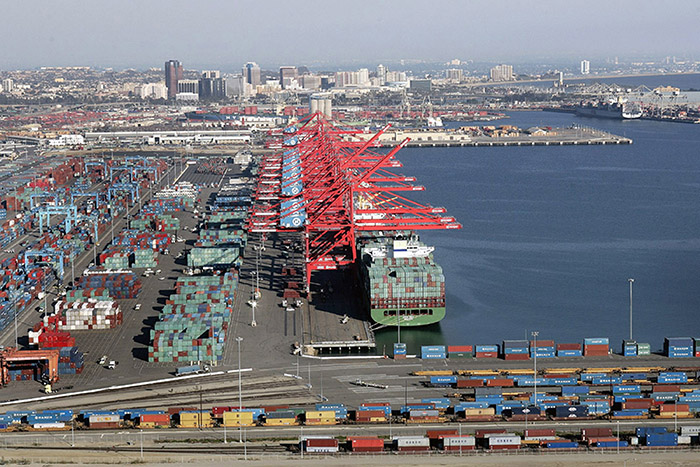 PALM SPRINGS, California — West Coast ports are perfectly capable of accommodating even greater cargo surges from big ships in the years ahead, but to do so they may have to turn to more exotic measures.

Those include broader use of trucker appointment systems, reduction or elimination of free time for cargo storage and greater reliance on intermodal rail, the president of the Pacific Merchant Shipping Association said last weekend.

John McLaurin told WESCCON, the western cargo conference of freight forwarders and customs brokers, that the ports are already on the right track in handling more cargo in a shorter period of time with reduced diesel emissions. He cited the grey chassis fleet in Southern California, free-flowing containers from marine terminals to off-dock yards and extended gate operations as good initial measures.

“All of these are steps in the right direction, but more needs to be done,” McLaurin said. Existing productivity initiatives are allowing West Coast ports to handle the current size of vessels calling there, which up to 14,000 twenty-foot-equivalent units. However, Jon Slangerup, chief executive of the Port of Long Beach, told WESCCON that shipping lines informed the Southern California ports they should prepare for the arrival of 18,000-TEU vessels within two years.

Although West Coast ports took a major hit this past year due to congestion and labor problems associated with the contract negotiations between the International Longshore and Warehouse Union and the Pacific Maritime Association, and their cargo volumes in January and February were a disaster, the ports in the last few months have regained most of the market share they lost.

“Will the West Coast ports recover? The short answer, based on their geographic location, the already massive transportation infrastructure that is in place and billions of dollars of additional terminal and shoreside transportation projects in the pipeline, is a firm ‘yes,’” said McLaurin, whose PMSA membership includes all of the major shipping lines and terminal operators at West Coast ports.

“There are multiple reasons for the return of cargo to West Coast ports, ranging from congestion at East Coast ports, geography, faster transit time, cost, population, extensive warehouse, distribution and rail service, and the like,” he said.

Shorter transit time from Asia to inland population hubs and therefore lower inventory carrying costs are a major advantage enjoyed by West Coast ports, Slangerup told WESCCON. He said retailers told Long Beach their transportation costs increased by millions of dollars for cargo that was diverted from the West Coast to East and Gulf Coast ports during the ILWU contract negotiations.

McLaurin said that labor issues aside, the real problems faced by West Coast ports revolve around cargo handling when big ships today are discharging and loading more containers than ever before — 10,000 or more container moves in a single vessel call. Handling cargo in today’s environment follows a decades-old system “based on the unannounced, random pickup and delivery of cargo. Should cargo volumes continue to grow through West Coast ports, we will eventually choke on our own success,” McLaurin said.

The goal of the ports should be to use their costly waterfront property “as high-velocity transit points” rather than as storage facilities with larger customers allowed extensive free time for the storage of their containers, he said. This is especially true of Los Angeles-Long Beach, where marine terminals are paying “upwards of $15,000 to $20,000 per hour for their lease arrangements,” he said.

The ports have been discussing or piloting projects to expand appointment systems for example, 10 of the 13 terminals in Los Angeles-Long Beach next year intend to have appointment systems. Other measures include increasing the use of on-dock and near-dock rail and establishing Uber-type systems for cargo pickup and delivery. The Southern California ports are also toying with the creation a shuttle train service capable of moving 750 containers in a unit train to the Inland Empire for redistribution from there.

Implementing such innovative processes will require the cooperation of all members of the supply chain and transportation modes, McLaurin said. In the past, solutions have been considered the burden of one industry or another, resulting in “bad public policy, bad decision-making, unintended consequences, unnecessary costs and, more importantly, the postponement of the development of meaningful solutions,” he said.

The end game for the entire supply chain must be “greater efficiency for all modes of transportation that intersect at our ports,” he said.