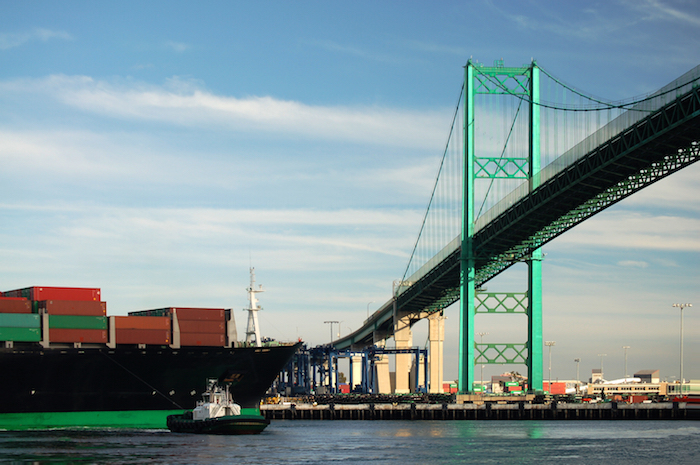 Terminal gridlock and persistent labor issues caught up with the ports of Los Angeles and Long Beach in December as the container volume at the busiest U.S. port complex declined 1 percent compared to December 2013. Total container volume includes both loaded and empty containers.

Congestion problems and labor issues were not as severe in Oakland, and container volume at the Northern California port was up 7.3 percent in December year-over-year. Loaded import containers surged 20.6 percent, and loaded export containers declined 9.3 percent year-over-year, according to numbers posted on Oakland’s website.

Exports have been down much of the year on the West Coast because of sluggish economic growth in China and an especially weak economy in Japan.

The Southern California ports struggled with congestion for much of the year. Carriers deployed ever-larger vessels in the Pacific Southwest services. Ships with a capacity of 8,000 20-foot container units are now common, with some carriers deploying vessels with capacities up to 14,000 TEUs.

The big ships create cargo surges that terminals are still adjusting to. Container moves of 5,000 or more per vessel call are common, with the biggest ships generating as many as 10,000 container moves per call. Furthermore, carriers have banded together in vessel-sharing alliances, and the alliances can call at five different terminals in the port complex, creating logistical nightmares for chassis providers and harbor drayage companies.

As if adjusting to the big ships and carrier alliances were not challenging enough, congestion was aggravated by service problems on the intermodal rail networks. Those problems began in the brutal winter of 2013-14 in the eastern half of the country when intermodal trains were delayed in the important Chicago hub and in East Coast cities. The trains were thrown off schedule, and intermodal containers backed up at the Southern California ports.

With the ports already experiencing severe congestion, job actions by the International Longshore and Warehouse Union pushed Los Angeles and Long Beach, which together handle about 40 percent of U.S. containerized imports, into gridlock. According to the Pacific Maritime Association, the ILWU locals in Southern California in early November notified employers that the number of skilled equipment operators that would be dispatched for container-yard work each day would be slashed.

The PMA said the ILWU was attempting to leverage the port congestion in its coastwide contract negotiations. Those negotiations began on May 12, 2014, and had dragged on inconclusively for months. The daily dispatch of skilled equipment operators, who are essential in the movement of containers from the yards to harbor drayage trucks, was decreased overnight from 110 equipment operators per day to 35, the PMA stated. The ILWU denies it is hard-timing employers and blames the ports’ problems on the congestion that had been building all year because of  the operational problems associated with big ships, carrier alliances and chassis shortages.

The bottom line, though, is that by December the terminals were overwhelmed with containers, leading to double- and triple-handling of containers and other productivity-sapping problems. Gene Seroka, executive director of the Port of Los Angeles, told the annual conference of the California Trucking Association last weekend that terminals were utilizing 95 to 97 percent of their available land. Terminal operators like to cap land utilization at 80 percent; they say that above that number, productivity is degraded.

There is no doubt that cargo interests have been diverting shipments away from the West Coast for the past six months because of the PMA-ILWU contract negotiations. The previous coastwide contract expired on July 1 and the ILWU refused to extend its previous contract while the negotiations continued. With no contract in effect, the grievance procedure that allows employers to challenge ILWU work slowdowns and other tactics is void.

National retailers and other large importers with multiple distribution channels therefore planned early in the year to fast-forward as much of their West Coast shipments as possible to arrive before July 1, and then they began diverting discretionary cargo to East and Gulf Coast ports after the contract expiration date.

Early shipments to the West Coast last spring and in early summer helped to salvage the calendar-year 2014 performance for California’s ports. According to the ports’ numbers posted on their websites, the combined ports of Los Angeles and Long Beach in 2014 handled 15,160,871 TEUs, which was an increase of 4 percent over 2013. Oakland last year handled 2,394,069 TEUs, an increase of 2 percent over 2013.

Cargo diversions to the East Coast and to the Canadian ports of Prince Rupert and Vancouver, which also experienced strong gains last year, are expected to continue at least until the PMA and ILWU reach a contract. In fact, several shipping lines have recently sent “extra-loaders” from Asia to carry imports to East Coast ports. Those are one-off voyages operated outside of the carriers’ normal weekly schedules.

Re-routing discretionary cargo to the East Coast on regularly scheduled all-water services to through the Panama and Suez canals comes at a cost to cargo interests. Those ships have been running full for months, allowing carriers to sustain rate increases.

Importers and exporters have also incurred significant costs because of late shipments and excessive delays at West Coast ports, prompting more than 100 shipper organizations to publicly criticize the ILWU and PMA for dragging the negotiations on for more than eight months now over issues that cargo interests say cannot be so important that they are worth disrupting international supply chains.

For example, negotiators for weeks have been stuck on the issue of ILWU maintenance and repair work on chassis. The union is concerned about the loss of those jobs now that shipping lines have sold most of their chassis to equipment-leasing companies. Those firms are not members of the PMA and therefore have no contractual relationship with the ILWU. In Southern California, ILWU mechanics account for about 10 percent of the union’s registrants.

Cargo interests also point out that dockworkers apparently have no sense of urgency to reach a contract settlement because slowdown measures actually increase the hours they work. According to the PMA website, for the four-week period ending on Dec. 19, employers paid longshoremen in Los Angeles-Long Beach for 20 percent more man-hours than for those same weeks in 2013, even though cargo volume in the port complex declined 1 percent.