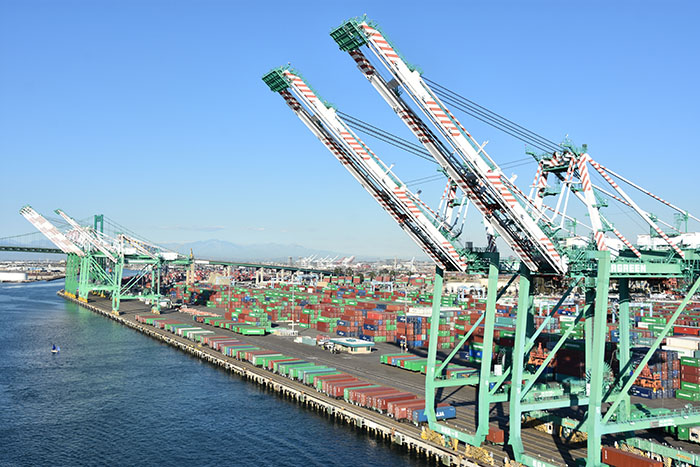 The average turn time at the 12 container terminals in Los Angeles-Long Beach was 68 minutes, down from 71 minutes in September, which was a six-year low at the time. Photo credit: Ritu Manoj Jethani/Shutterstock.com.

Truck turn times in the ports of Los Angeles and Long Beach were the lowest in six years in October, as continuous outreach by terminal operators with the trucking community is paying dividends in the largest United States port complex. Stagnant year-over-year growth in container volumes this fall has certainly contributed to improved gate times.

The average turn time at the 12 container terminals in Los Angeles-Long Beach was 68 minutes for the month, down from 71 minutes in September, which was a six-year low at the time, according to the Harbor Trucking Association (HTA).

Total laden and empty container volumes year-to-date in Los Angeles through October were up 1.8 percent, and volumes were down 2.4 percent in Long Beach, according to port statistics. “When volumes are down, you get better turn times,” said Weston LaBar, CEO of the trucking association.

Terminal operators all year have been reaching out to the trucker community, sharing key metrics and using the data to zero in on specific issues at individual terminals to improve turn times. The information that is shared involves issues that consistently occur in the yard or at the gates that slow down truck transactions.

Terminals also benefit from improved gate times. “This impacts their ability to recruit new business,” LaBar told JOC.com Monday. Terminal operators with consistently better turn times than the port average market their efficiency to shippers in a port complex where carriers’ vessels may call at several different terminals due to their participation in vessel-sharing alliances.

Six of the 12 terminals recorded improved turn times in October. Two operators, Long Beach Container Terminal (LBCT) and SSA-Matson, had average turn times of 33 minutes, less than half of the port-wide average.

Anthony Otto, president of LBCT, said better use of the trucker appointment system to process shipment information and correct errors before the appointments are made and the use of technology at the gates and automation in the yard have resulted in improved terminal performance for truckers as well as LBCT.

Otto said in addition to reaching out to truckers, using technology to exchange information on the status of containers to ensure that all of the paperwork is in order before the appointment is made eliminates unnecessary downtime at the terminal gates. “They’re not standing around for an hour for something that should have been clarified before the appointment was made,” he said.

LaBar added that most of the terminals are improving their performance in part because of better use of trucker appointments. “They’re using the appointment systems to meter gate flow and apportion traffic in the day versus night shifts,” he said.

LaBar said that as terminals reduce truck turn times to acceptable levels, they are able to focus on other areas that need improvement such as generating more dual transactions for truckers and fostering more consistent performance through better use of appointments.

“The terminal operators deserve a lot of credit for their outreach to the trucking community,” he said.

Global Shipping Outlook: A Sneak Peek at 2021
Port Performance North America: Managing Cargo Flow During a Pandemic — and Beyond
END_OF_DOCUMENT_TOKEN_TO_BE_REPLACED