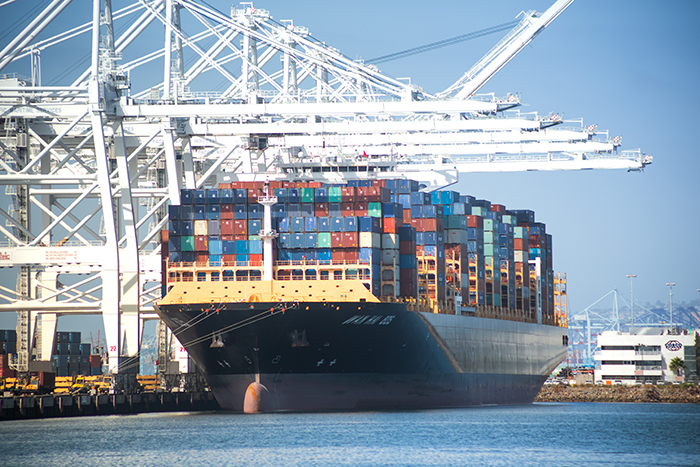 There were 26 container ships waiting at anchor for berthing space at Los Angeles and Long Beach terminals on Tuesday, up from 21 the day before. Photo credit: TonelsonProductions / Shutterstock.com.

Terminal operators in the ports of Los Angeles and Long Beach sounded the alarm this week that they are already beginning to experience the vessel bunching, chassis shortages, and excessive container dwell times seen during the 2020 peak season last fall.

Vessels have begun stacking up outside the busiest US port complex as ships delayed during the shutdown of Yantian in South China began to arrive in Southern California at the same time as ships from new trans-Pacific services, strings diverted from Oakland, and additional extra-loader vessels call.

There were 26 container ships waiting at anchor for berthing space at Los Angeles and Long Beach terminals on Tuesday, according to the Marine Exchange of Southern California. The number of vessels at anchor peaked at 40 in February, but decreased steadily in March and April, and had been hovering in the midteens until last week.

The sudden torrent of ship arrivals comes on the back of imports through Los Angeles-Long Beach that spiked 41.1 percent year over year in the first six months of 2021, according to PIERS, a JOC.com sister product within IHS Markit. From the beginning of the US economic rebound from initial COVID-19 lockdowns in July 2020 through June 2021, terminals in Los Angeles and Long Beach have handled an average of 855,411 TEU per month in laden imports. To put that in perspective, imports through the port complex averaged 697,892 TEU in pre-pandemic 2019 and only eclipsed 800,000 TEU in a single month once that year.

Alan McCorkle, president of Yusen Terminals in Los Angeles, cautioned that terminals are beginning to feel the strain again of record-setting import volumes. “The cargo is moving. It hasn’t come to a stop, but it’s starting to move more slowly,” he told JOC.com.

Terminals are rapidly filling to capacity, in part because of excessive dwell times for both local delivery containers and rail containers that are awaiting sufficient trains and rail cars to move those containers from Southern California to the eastern half of the country. Both Union Pacific Railroad and BNSF Railway have been forced to meter intermodal shipments from Southern California due to congestion at inland terminals, particularly in the Chicago area.

The average dwell time for local delivery containers in Los Angeles and Long Beach terminals rose to 4.76 days in June from 3.96 days in May, according to the Pacific Merchant Shipping Association (PMSA), which represents terminal operators on the West Coast. Average rail container dwells increased to 11.8 days from the “already high” 10.5 days the previous month, PMSA said in a statement.

Unlike in the first few months of the year, longshore labor availability is not an issue at present, in part because there would not be enough room on the docks for containers if vessels are unloaded too quickly, said Ed DeNike, president of SSA Containers.

“We don’t have the space,” he said. “The reason is that imports are sitting in the yard because they’re not being picked up.”

DeNike said some retailers are letting their laden import containers sit at the terminals for days, sometimes weeks, beyond the expiration of free storage time, a sign that import distribution centers are beginning to fill up. “They’re paying thousands of dollars in demurrage,” he said. “Why would they be paying thousands of dollars in demurrage if they had some place to bring all of the containers?”

Slower circulation of marine chassis throughout the 12-month surge in imports has created an effective shortage of equipment, making it more difficult for shippers to retrieve loaded import boxes and return empties.

“Chassis availability is super challenging these days, as challenging as it has ever been, and that is saying a whole lot since chassis availability has been a huge challenge the past several years, even pre-COVID,” said Scott Weiss, vice president of business development for import warehouse operator Whiplash.

Ron Joseph, executive vice president and COO at intermodal equipment provider (IEP) DCLI, said chassis dwell times at warehouses in Southern California in recent weeks have jumped from less than seven days, which was already above the benchmark set by IEPs, to 8.3 days this week. More than 50 percent of the chassis have been dwelling for more than seven days, and about 2,500 chassis in the region have street dwell times of more than 30 days, according to Joseph. IEPs say street dwells of three days are preferred, and anything above four days can contribute to chassis shortages in the region.

And with congestion mounting, terminals in Los Angeles and Long Beach are limiting the number of empty container-chassis units they will accept from the warehouses once the containers are unloaded.

“An obvious ongoing pain point is the lack of appointments for empty returns because the terminals are pretty much bursting at the seams, which in turn is resulting in major chassis shortages due to longer street dwell times,” said Matt Schrapp, CEO of the Harbor Trucking Association in Southern California.

In order to clear as many import loads and rail containers from the marine terminals as possible, operators are sending the container-chassis units to off-dock “surge” yards for temporary storage.

Some ocean carriers are now metering inland point intermodal (IPI) bookings for Los Angeles-Long Beach because the railroads are overloaded. Ocean Network Express, for example, said in a customer advisory Wednesday it would immediately begin limiting inbound bookings via Los Angeles, Long Beach, and Oakland to all IPI points, citing “severe operational difficulties and railcar shortages” at the ports.

With marine terminals now handling 20 to 30 percent more imports than they were last summer, and holiday merchandise already beginning to arrive at the ports and building toward the September-October peak, it is difficult to imagine that conditions will improve anytime soon, DeNike said.

“It doesn’t look like there is a light at the end of the tunnel,” he said.

How to Improve OTIF: 15 Tips for On Time and In Full Delivery
END_OF_DOCUMENT_TOKEN_TO_BE_REPLACED