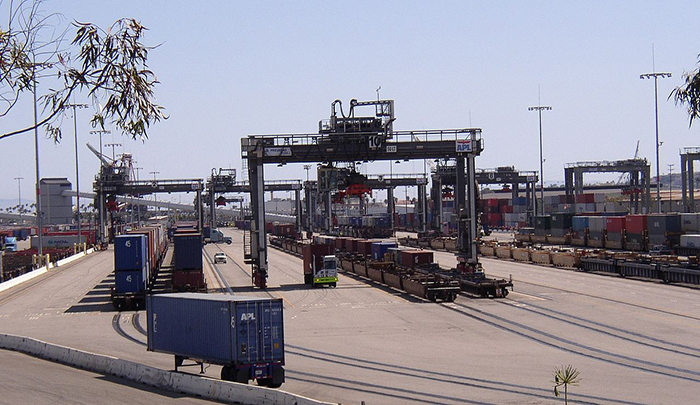 Intermodal rail at the Port of Long Beach.

The ports of Los Angeles and Long Beach are taking a fresh look at short haul-rail of containers to an inland cluster of distribution centers as a way to combat systemic congestion at the largest North American container gateway.

The ports are eyeing the roughly two-thirds of their imported containers that today are currently drayed to distribution centers and transloaded into trucks or domestic rail containers and from there sent virtually anywhere in North America.

The two Western Class I railroads, BNSF Railway and Union Pacific Railroad, have shied away from the business, as the margins aren’t favorable enough for them to get their hands dirty in what promises to be complicated operationally. But today the rationale from the ports' perspective is greater than it was a decade ago when short-haul was last seriously looked at, given the congestion the ports are facing. Short haul rail moves would reduce the need for chassis and truck drivers, and take pressure off the terminal gates where truckers still can queue up for hours waiting to drop off or pick up a container.

Loading these containers, or at least some of them, at on-dock rail facilities and sending them up the 20-mile long Alameda Corridor and a total of 80 miles east to a facility in the Inland Empire has been an idea floated for years due to the environmental benefits and opportunity to relieve pressure on congested Interstate 710.

Today, short-haul rail is potentially the single biggest opportunity currently at the ports’ disposal to make a major dent in the new and chronic forms of congestion the ports are facing in an era of mega-ships and driver and chassis shortages. Bold strokes to reduce congestion would also help the ports to overcome negative perceptions of reliability resulting from the disruption in late 2014 and early 2015 tied to West Coast longshore labor negotiations. The port of Los Angeles is studying how much unutilized capacity there is for short-haul loading at its on-dock intermodal rail terminals.

“If we took every box that could be loaded on dock, and loaded it on dock, we would dramatically reduce gate moves, chassis needs and improve the overall supply chain,” NYK Ports chief executive Patrick Burgoyne told JOC.com in October.

That is why, despite the hurdles that have stood in the way of earlier attempts to get it going, short-haul is being given a fresh look by the directors of the two ports. “There is optimism,” Port of Los Angeles Executive Director Gene Seroka said at the JOC Port Performance Conference in Iselin, New Jersey in early December. “We’ve talked directly to Western railroads and there is indeed interest.”

The challenge is making short-haul rail work when earlier attempts failed. A decade ago, when the idea was last seriously studied, it was determined that rail would cost an additional $150 per move versus truck and would thus be uncompetitive without extensive funds to subsidize the rail move. “We visited the idea 10 years ago and determined at the time there was a differential between trucking and rail for short-haul and it would require a sustainable subsidy to manage it. So it fell by the wayside,” John Doherty, chief executive of the Alameda Corridor Transportation Authority, told JOC.com.

But he noted that it’s a different situation today, with new challenges confronting the ports, particularly the systemic congestion that occurs despite much slower rates of growth. Mega-ships like CMA CGM’s 18,000 TEU Benjamin Franklin calling at Los Angeles on Dec. 26, the largest container ship ever to call at a U.S. port, and more that are on the way, are contributing to congestion at the Southern California ports.

“Given recent congestion issues it seemed like an appropriate time to revisit the concept,” Doherty said.

Transit time would be one key consideration. Import containers headed to the Inland Empire would have to wait at the pier until all of up to 750 containers are loaded on a shuttle train at an on-dock facility, but then it should only be a two-hour trip from the port to the Inland Empire with trains running at roughly 40 miles per hour, Doherty said. Then, of course, there would need to be a trucking move at the inland end which would tack on additional transit time depending on how far the DC is from the Inland Empire railhead. DCs are spread spread over a large area not just in the Inland Empire, broadly defined as Riverside and San Bernardino counties east of Los Angeles, but all of Southern California and even beyond in the U.S. Southwest in some cases.

Doherty noted that for the concept to work it will still come down to whether rail can compete against truck from the demanding point of view of the customer. “The central question is, can short-haul rail service compete with trucks in terms of cost, transit time and reliability?” he said.

The Alameda Corridor itself would pose no obstacle. It currently handles 40 trains per day but has the capacity for 150, Doherty said. And there is unused on-dock rail capacity on the piers, though it varies by facility. But any number of other issues would present potential challenges, though none seemingly insurmountable. One is identifying an Inland Empire location for a suitable railhead. The existing BNSF Railway and UP yards in the Inland Empire are pushing full capacity, dominated by domestic freight and could not easily accommodate what could initially be an experimental extra burden of short-haul traffic. The UP City of Industry yard, and the BNSF yard in San Bernardino “are chock a block with 53s,” Doherty said. “They could handle a pilot program, maybe, but for something that would be long term and sustainable, you need a separate facility. I don’t think they would even be able to sustain even a pilot at the risk of reliability to the current customers of their long-haul operation.”

The Long Beach and Los Angeles ports are making investments that will result in on-dock rail access at all of the 13 container terminals in the port complex. Making on-dock rail work operationally involves ensuring sufficient acreage dedicated to storing equipment and assembling long trains. Since the ports are not creating new land, expanding rail operations involves re-purposing properties to make them more rail-friendly.

Seroka said that potential locations for an inland rail shuttle facility have been identified. Any new facility, since it would be limited in size, would by definition be a fast-turnaround operation, with dwell times for containers “in terms of hours, not days, to ensure rapid throughput of equipment,” Seroka said.

Port of Long Beach Chief Executive Jon Slangerup told JOC.com in November that the idea of short-haul is being studied anew, with a main difference between now and earlier attempts being the potential for loading exports at the Inland Empire, creating the opportunity for a two-way revenue move for the railroads.

“There is talk on the export side about being able to utilize short-haul rail, which wasn’t a topic of conversation when we begin these discussions more than a decade ago,” Seroka said.

The potential market for short-haul rail in Southern California — and thus the opportunity to beat back port congestion — is huge. The Alameda corridor currently handles only about 30 percent of the ports’ imports, all of them intact container loads from Asia destined for Chicago, Dallas, Kansas City or other inland destinations. Most of the remaining 70 percent, over 5 million TEUs, or over 2 million truck trips annually, is potentially a candidate for short-haul rail. The opportunity to ease pressure on terminal gates, chassis, and trucking if even a portion of that market could be served is enormous, observers say.

“There is a big target market there,” Doherty said, including all imported containers transloaded to truck or to domestic rail. “But the challenge is, can you deliver it out to the Inland Empire, and would someone pay for that service and then stay with you,” if for example truck rates were to drop, undermining the economics of the rail move. He said that while many DCs were concentrated in the Inland Empire, they are still as a practical matter spread out over a wide area, requiring a possibly lengthy truck move after the rail segment is completed.

Getting the railroads on board won’t be easy either. Railroads, especially the Western Class I carriers BNSF and UP, find profitability on long-haul routes with heavy traffic density. Short-haul routes are seen as cutting into profitability.

“Historically there has not been a compelling business case for an Inland Empire shuttle plan. We understand that some entities are discussing the concept again, but we have not been presented with a viable business case to consider it,” said BNSF spokeswomen Amy Casas.