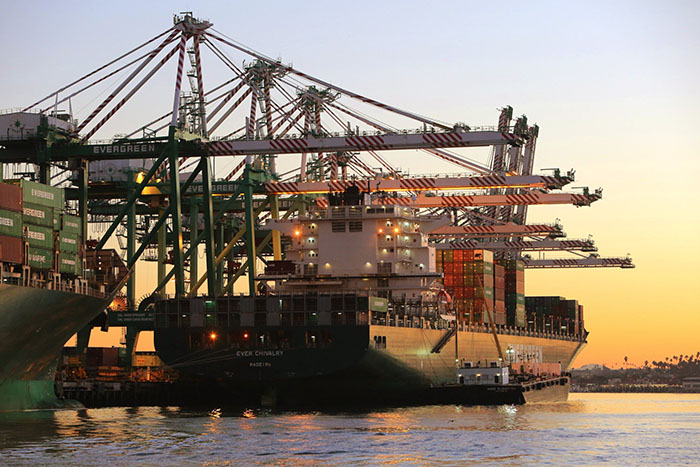 The ports of Los Angeles and Long Beach lead the United States in cargo volumes and sustainable practices.

The ports of Los Angeles and Long Beach in 2016 were able to reduce emissions while handling more volume, but terminal operators and container lines argue that the next phase toward cleaner air comes with a cost that could dampen cargo growth

Citing the 96 percent reduction of diesel particulate matter (DPM) in the port complex since 2005, the ports said the cost of achieving clean-air goals is not causing cargo interests to divert their business elsewhere. However, the Pacific Merchant Shipping Association (PMSA), which represents terminal operators and shipping lines, said the future cost of achieving even cleaner air as the ports move toward zero emissions under their joint Clean Air Action Plan could be too costly for transport providers and shippers to bear.

“The draft Clean Air Action Plan envisions spending at least $14 billion to achieve the remaining 4 percent — a mind-boggling number that neither ports nor their customers can afford to pay,” said PMSA president John McLaurin.

Each port this past week released its 2016 inventory of diesel particulate matter, nitrogen oxide (NOx), and sulfur dioxide (SOx) emissions. In addition to these health-risk pollutants that contribute to upper respiratory and cardiovascular illnesses, the ports released their greenhouse gas inventories. Greenhouse gases contribute to global warming.

Greenhouse gas emissions in Los Angeles dropped 28 percent and 22 percent in Long Beach. The original CAAP did not focus on greenhouse gases, but as the clean-air plan evolves, greater attention is being given to emissions that contribute to global warming.

As these achievements were recorded, Los Angeles reported a record container volume of 8.85 million 20-foot equivalent unit containers in 2016. Long Beach reported total container volume of 6.77 million TEU. Long Beach has not yet returned to its record 2007 performance of 7.31 million TEU, although volumes year-to-date in 2017 are up 6.4 percent as the port picked up business following the rearrangement of global vessel-sharing alliances on April 1.

The ports in 2016 registered impressive gains in clean air due to greater industry participation in emissions-reduction programs and expansion of zero and near-zero emission technologies at automated facilities. Los Angeles in 2016 reported a 13 percent reduction in DPM, a 10 percent reduction in NOx, and 14 percent reduction in SOx from 2015. As the Middle Harbor automation program unfolds in Long Beach, that facility will move closer to zero emissions through the use of electric or battery-powered cargo-handling equipment. As a result of developments at Middle Harbor and other facilities, 11 percent of the Long Beach’s cargo-handling equipment is zero emissions, the port stated.

Another factor contributing to the reduction in emissions is that fewer but larger vessels are calling at California’s ports each year. Vessels of 10,000-14,000-TEU capacity, or two to three times the size of vessels that dominated the trans-Pacific five years ago, are now common in Pacific Southwest services. The typical Pacific Southwest service calls Los  Angeles or Long  Beach inbound and Oakland outbound. In fact, Oakland reported that so far this year vessel calls are down 7.6 percent even though total container volume is up 2 percent. Furthermore, the newer vessels now operating in the trans-Pacific generate fewer emissions than the older vessels in previous years, the port stated.

Los Angeles and Long Beach are in the process of developing the third version of their CAAP, known as CAAP 3.0, which confirms the intention of the ports to move toward a zero emission environment that will eventually feature electric or battery-powered cargo-handling equipment and trucks. That goal scares the maritime and trucking communities, which question at what cost will the incremental gains of the future be realized.

PMSA commissioned a study by Starcrest Consulting Group that concluded the port and transportation costs needed to achieve zero emissions in Southern California could result in enough diversion of cargo that there would actually be a net increase in greenhouse gas emissions in the US trade from Asia. “Shippers and cargo owners, in response to increased costs due to regulation, may divert cargo from higher-cost West Coast ports to lower-cost East Coast and Gulf Coast ports,” according to the study.

The report focused on Asian imports destined for the US interior, an area which is best served from West Coast ports because of transit-time savings of 10 days or more compared with East and Gulf Coast routings. However, if cargo interests divert shipments from the West Coast due to higher port costs, the net result could be that greenhouse-gas emissions generated by Asian imports will end up being 22 percent higher due to the longer distances involved in all-water services to the East Coast coupled with the inland transportation move. Starcrest developed a spreadsheet-based greenhouse gas route comparison tool for analyzing emissions from shipments originating in South Korea, China, and Singapore to inland US destinations via West Coast ports vs East and Gulf Coast routing through the Panama and Suez canals.

“Cargo owners around the world make decisions based on their  pocket books,” McLaurin said.

“We urge policymakers to take a more holistic view and include global competitiveness as a factor in developing regulations to clean the air. Doing so is essential to keep cargo and jobs in Los Angeles and Long Beach, and to avoid unintended GHG emissions increases,” he said.

Port executives in Southern California note that the cost of transportation involves complex calculations involving comparative ocean freight rates, intermodal rail costs, port costs, inventory-carrying costs, frequency of services from Asian ports, frequency of rail services to inland destinations and other factors that comprise the all-inclusive cost of a transportation move. Cargo interests are also keenly aware of the importance of reliability as they plan their supply chains, and the recent extension of the International Longshore and Warehouse Union contract to July 1, 2022, give shippers the confidence to plan their supply chains through Southern California for the next five years, the Port of Los Angeles executive director told JOC.com last week.