LA-LB port set for another month of congestion

LA-LB port set for another month of congestion 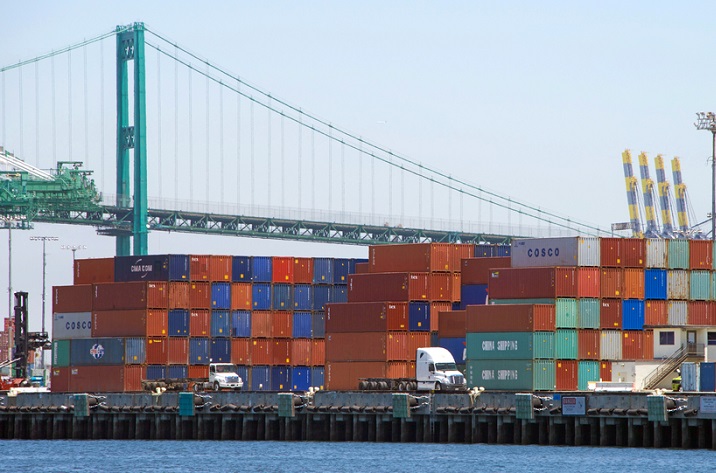 Container dwell times increased to 3.51 days in November, the latest month for which data is available, from 3.26 days in October and 2.89 days in September, according to the Pacific Merchant Shipping Association. (Above: Trucks at the Port of Los Angeles.) Photo credit: Shutterstock.com.

US importers shipping through Los Angeles-Long Beach should expect congested marine terminals, lengthy truck turn times, equipment shortages, and distribution warehouses that are stuffed beyond capacity for at least another month.

The causes of the extreme gridlock in Los Angeles-Long Beach include the 34 extra-loader vessels that called at the largest US port complex since November, an unprecedented year-over-year increase in imports of more than 20 percent in December, the worst container dwell times in two years, and severe equipment shortages. Southern California was the epicenter of front-loading of spring shipments to get ahead of the Trump administration’s now-delayed 25 percent tariffs on Chinese imports, and retailers are holding on to the merchandise at their warehouses in Southern California awaiting decisions on where to ship the freight.

With warehouse space in Southern California maxed out, retailers are storing import loads on chassis in their yards, or anywhere else where they can find space. By tying up chassis for weeks at a time, the beneficial cargo owners (BCOs) have precipitated a chassis shortage in the region, which in turn prevents truckers from returning empty containers to the ports. An executive at an intermodal equipment provider (IEP) said that this could result in a shortage of empty containers in Asia this winter.

“The next call is a container shortage in Asia because they’re sitting at warehouses in the US,” David Arsenault, chief strategy officer at Direct ChassisLink Inc., told the Propeller Club of Los Angeles-Long Beach Wednesday.

Arsenault said the answer to these problems, which are present to a degree at major gateways around the country but are oversized in Southern California, is to wait until imports from Asia drop off significantly next month when factories in Asia close for a couple of weeks for the annual Lunar New Year celebrations. “It’s not the solution people want to hear, but it probably won’t be until March when the industry will be able to take a breath,” he said.

The reason why congestion problems in Southern California dwarf the congestion in other ports, according to a trucker who has operations on the West and East coasts, is that importers who feared last autumn that their costs would soar after Jan. 1, (before the administration agreed to postpone increasing tariffs on $200 billion worth of goods from 10 percent to 25 percent until March 1), concentrated almost all of their front-loaded shipments in Los Angeles-Long Beach. It may be weeks before they choose final destinations in the eastern half of the country for that merchandise.

Container dwell times increased to 3.51 days in November, the latest month for which data is available, from 3.26 days in October and 2.89 days in September, according to the Pacific Merchant Shipping Association (PMSA). Additionally, 13 percent of the containers dwelled at the terminals for five days or longer, compared with only 5 percent in September. “The increase in dwell times greater than five days is of concern,” said Jessica Alvarenga, manager of government affairs at the PMSA.

In addition to overwhelming the marine terminals, which gear their operations for regularly scheduled weekly calls by vessels of 10,000-14,000-TEU capacity, the extra-loaders placed an unprecedented strain on warehouses throughout Southern California. Also, the extra-loaders discharged spring merchandise that wasn’t supposed to arrive until January-February, so retailers have not yet decided where in the eastern half of the country to ship the merchandise. The freight continues to sit in the approximately 1.8 billion square feet of industrial space throughout Southern California, or in loaded containers on chassis scattered throughout the region.

Scott Weiss, vice president of business development at Port Logistics Group, said equipment in the region is all used up, truck waiting times at the marine terminals are getting longer, which in turn is precipitating an artificial driver shortage problem, and the congested marine terminals are rationing the return of empty containers because they are out of space. “It’s just horrible,” he said.

Weston LaBar, CEO of the trucking association, noted, however, that some terminals consistently outperform the portwide average, even during periods of congestion, while others perform poorly when congestion mounts. For example, four terminals in December had average truck visit times ranging from 103 to 117 minutes, while five terminals averaged 75 minutes or less. However, since drivers at the poor-performing terminals waste so much time, their productivity plummets, and the normal condition of adequate truck capacity suddenly becomes a capacity shortage.

Terminal operators face a similar problem. When they are operating at less than 80 percent utilization, which is considered full capacity in the industry, terminals are able to strategically stack containers in the yard order for an efficient operation. When utilization spikes above 80 percent utilization, rubber-tire gantry crane operators in the yard end up shuffling containers around four or five times to retrieve the container they need, which creates an artificial labor shortage.

Although stakeholders in the logistics supply chain are tempted to blame their favorite targets when congestion occurs, be they large BCOs who are granted extra free time by shipping lines for holding onto equipment, the IEPs who provide the chassis, the terminal operators who cut off the return of empty containers when their yards are full, or the carriers who with only a week or two notice send extra-loader vessels to the ports, Arsenault said it is the unplanned for confluence of events that produced the current gridlock. “This is about survival when so much incremental volume has been added,” he said.

Import figures published by PIERS, a JOC.com sister company, shows that in December US containerized imports increased 21.8 percent year over year, about the same as Port of Los Angeles numbers showing a similar 21.4 percent increase in imports compared with December 2017. The big difference in Southern California is that 34 extra-loaders called at the port complex in addition to the more than 40 regularly scheduled weekly services, whereas at other ports the increased volumes were carried on the regularly scheduled weekly services. “There’s not enough footprint here to have the extra-loaders put the new containers on top of the containers already there,” said a Southern California trucker bemoaning the excessive wait times at some terminals.

SSA Marine, which operates container terminals in Seattle and Oakland, as well as three terminals in Long Beach, experienced minimal congestion problems at the northern ports, said Ed DeNike, president of SSA Containers. He cited the chassis dislocations resulting from imported containers sitting on chassis throughout the region as the main problem in Southern California. Even though SSA has 2,000 of its own chassis, “We used up all of our chassis,” he said. SSA tried to lease additional chassis from the pool of pools, to which the three large IEPs have contributed more than 60,000 chassis, but the pool chassis are all tied up as well, he said.

Although the two port authorities are landlords and do not operate the marine terminals, they are attempting to facilitate solutions. “We will aggressively pursue empty containers and chassis returns along with liner company box repositioning back to Asia. These actions will prepare us for the short-term cargo arrivals prior to the March 1 deadline set on the tariff negotiations,” said Gene Seroka, executive director in Los Angeles. “We continue to work with our supply chain partners to increase fluidity in and outside the terminals,” said Noel Hacegaba.

Hacegaba said the port complex will continue to experience stronger-than-usual cargo volumes until vessel departures from Asia drop during the Lunar New Year celebrations. Those vessels will arrive in Southern California one to two weeks after Feb. 5. After that, the canceled sailings that carriers have announced for February should give the terminals and warehouses the breather they need to clear out the cargo backlog, he said. Carriers in the eastbound Pacific have announced 35 blank sailings next month.