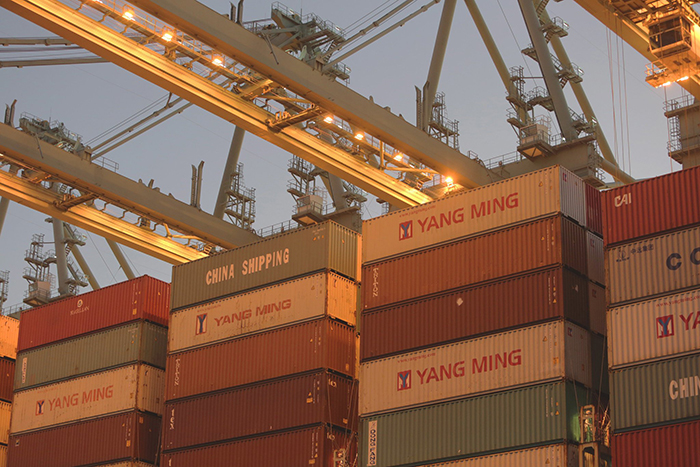 Access to data can help sort through the confusion that arises when the cargo of multiple carriers is offloaded from a single vessel.

LONG BEACH, California — The Port of Los Angeles and GE Transportation are working together to build what they envision will be container terminals of the 21st century, where data sharing enables equipment and labor to be ready for volume surges at the precise time.

The port and division of giant General Electric are working with terminal operators, shipping lines, cargo interests, truckers, and railroads on a pilot project to gather as much information as possible on shipments, and to funnel that data through a single electronic window, or portal. Data on origin, destination, terminal handling the container, and the point of intermodal change all would help marine terminals and others better prepare for surges of imports produced by mega-ships operating in an alliance.

Ports throughout North America are scrambling to unify their supply chains, with an important test of their efforts ready to occur on April 1. That’s the day when the major shipping lines will begin to operate in restructured vessel-sharing alliances with a new schedule of port calls and, in some cases, deployment of larger vessels.

“This is the first time we are seeing all of the alliances begin on a shotgun start,” said David Arsenault, a consultant and former president of Hyundai Merchant Marine America. In this new environment, the carriers that call at the most efficient terminals, those that share data with their vendors and customers, and deliver containers more efficiently to their customers, will be the most successful in attracting and keeping business. “The marine terminal is a competitive weapon,” Arsenault told the Harbor Trucking Association in Long Beach last week.

Jennifer Schopfer, executive director, customer performance analytics at GE Transportation, compared the effort to digitalize the marine terminal environment with the task that General Electric faced when the decision was made several years ago to restructure its $40 billion supply chain that involved 400 factories and more than 200 information systems. The successful effort to bring all of the data together produced savings of $40 million, which is being repeated annually, she said.

The operations of many ports and terminals are still siloed, with each segment in the supply chain doing a credible job in gathering its own data through its own system. However, because there is no mechanism for sharing the data across the supply chain, terminals experience bottlenecks alongside the vessel, in the container yard, and at the gates. As a result, cargo interests and their truckers experience costly delays in the delivery of containers. This scene must change, said Weston LaBar, executive director of the HTA. “What does the 21st century look like? It has reduced congestion and improved turn times,” he said.

Data sharing already in use in ports such as Los Angeles-Long Beach can dramatically reduce turn times. For example, a harbor drayage company that has advance notice on the location of containers and their release times can arrange appointments that increase the number of dual transactions drivers can make, and turn times can be reduced from an average of close to 90 minutes to less than 50 minutes, LaBar said. To obtain real-time data on traffic conditions at the 13 container terminals in Los Angeles-Long Beach, truckers and benefical cargo owners are accessing real-time data that is made available by GeoStamp, he added.

The port and marine terminal environment is complex, and working in that environment requires communication among a number of parties. “The marine terminal is such a fertile ground for information that can be shared,” said Fred Johring, president of Golden State Carriers and chairman of the HTA. “I am looking at data from 40 different sources. It would be nice to integrate all of it into one spot,” he said.

Improving real-time access to the number, type, and location of the approximately 80,000 chassis in Southern California would go a long way in enhancing equipment availability throughout the harbor area, said Greg Moore, senior vice president of Flexi-Van Leasing. Improving chassis availability through the pool of pools arrangement in Southern California is a current endeavor of the supply-chain optimization task force in Los Angeles-Long Beach.

Schopfer said the largest benefit of making all such data available to all members of the supply chain a week or two before vessel arrival, which is the goal of the Port of Los Angeles pilot project, would be the ability to predict what their equipment and labor needs will be for each vessel call. The goal is to build a single platform that will enable the use of predictive analytics to optimize assets and reduce supply chain costs, she said.

Global Shipping Outlook: A Sneak Peek at 2021
Port Performance North America: Managing Cargo Flow During a Pandemic — and Beyond
END_OF_DOCUMENT_TOKEN_TO_BE_REPLACED