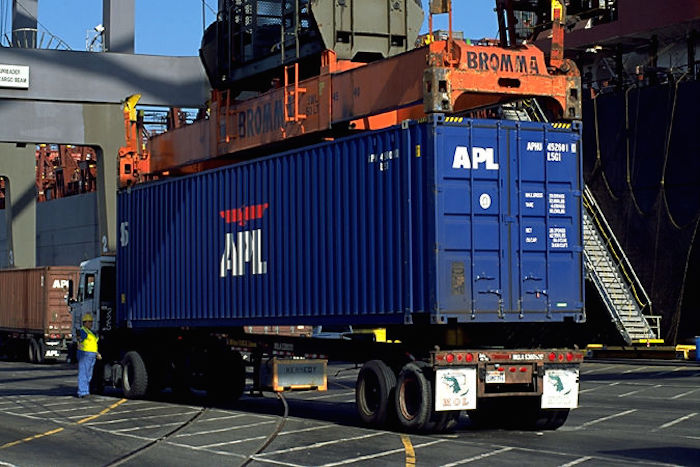 The Port of Los Angeles is teaming up with terminal operators and a harbor drayage company to launch a container free-flow operation aimed at reducing congestion at the largest U.S. port while delivering import loads to retailers and other large shippers quickly and efficiently.

“I am confident we will see this business model expand,” said Jeff Burgin, senior vice president of Pasha Stevedoring and Terminals. The model can be expanded to include other terminal operators in the Los Angeles-Long Beach port complex, and to other ports as well. Pasha began operations on Wednesday at a 16-acre site located within a mile of the port.

Here is how free-flow works. Drayage firm TTSI serves a core group of beneficial cargo owners that generate a critical mass of imports each week. Four marine terminals that handle imports from those BCOs — APL, APMT, Yusen Terminals and West Basin Container Terminal — discharge those BCOs’ imports from the vessels and stack them in a block. TTSI truckers “peel off” the containers from the block and take them to the Pasha yard. Either TTSI or other truckers take the loaded containers to the BCOs’ distribution centers in the region. The drivers then pick up empty containers at the DCs and return them to the harbor.

This closed-loop operation offers a number of benefits. It reduces congestion at the marine terminals by draying off 400 to 500 containers a day as soon as the import loads are discharged from ships. Harbor truckers experience quicker turn times. Rather than waiting at a general stack of containers for the correct box, each trucker proceeds directly to TTSI’s block and peels off the top container without regard to the consignee. The trucker then drives less than a mile to the Pasha site. At a time when ports are experiencing significant problems with chassis availability, TTSI’s chassis remain in the loop. When an import load and chassis are delivered to a DC, the driver then picks up an empty box that has already been mounted on a chassis and returns it to the harbor.

“Our goal is velocity,” said Vic LaRosa, CEO of TTSI.

Drivers’ time is respected because there should be no delays within the marine terminal or at Pasha’s near-dock yard. This also translates to a time savings for the BCOs both at the marine terminals and in retrieving the import load at the near-dock yard and transporting it to the inland distribution center. Sufficient chassis that are inspected to ensure they meet roadability requirements are always available. All of the imported containers are stored on chassis at the Pasha facility, and this facilitates quick pickup of the containers for delivery to the distribution centers.

Pasha’s near-dock yard is manned by International Longshore and Warehouse Union gate clerks and includes a maintenance shop where ILWU mechanics will  repair the chassis when defects are found. Preserving chassis inspection and M&R jurisdiction was one of the most controversial issues in the nine-month contract negotiations between the ILWU and the Pacific Maritime Association. This free-flow arrangement should prevent any friction with the union.

LaRosa said the free-flow operation is open from 8 a.m. to 3 a.m. the following morning, five days a week, although eventually there may be enough volume to operate 24/7. Since the BCOs he serves call at other marine terminals in addition to the four that have partnered with TTSI, LaRosa expects other terminals will eventually join in as they generate sufficient volume to warrant a TTSI block at their terminals.

Pasha is in a good position to operate the near-dock yard because as a terminal operator it handles primarily non-containerized cargoes. It is not a competitor of the operators of the 13 container terminals in Los Angeles-Long Beach and can therefore serve as a near-dock partner for any of the marine terminals in the port complex.

The Pasha yard can accommodate up to 650 containers on chassis. If the free-flow model proves to be effective, there will be a need for other near-dock sites at the port complex. While land is constrained in the harbor area, Burgin said there are other potential sites in the harbor area for near-dock facilities.