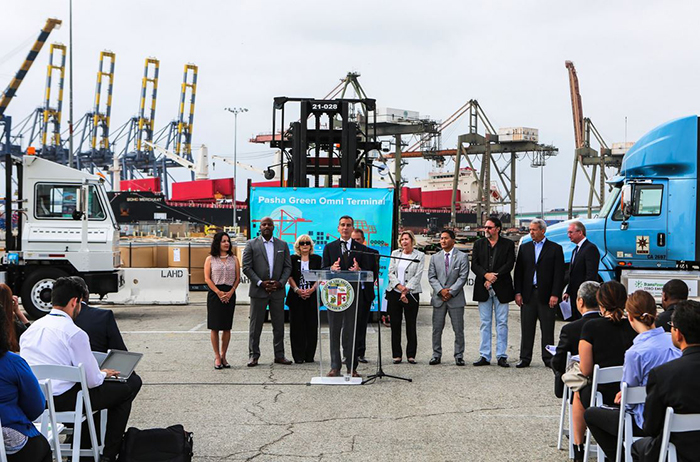 The first steps were taken Tuesday toward development of a new zero-emission terminal at the Port of Los Angeles, and is the latest sign of how shippers’ pressure to shrink their carbon footprint and reduce diesel emissions in their supply chains could be felt nationwide.

The Pasha Green Omni Terminal, a breakbulk and container facility, unveiled zero and near-zero emission trucks and cargo-handling equipment that will be used at the terminal. Also, the green terminal will be gradually transformed so that it will be capable of generating its own renewable energy for emergency use.

Los Angeles and neighboring Long Beach are working together to make the largest U.S. port complex the leader in the development and use of zero and near-zero emission technology. “One bay, two ports, one vision,” Los Angeles Mayor Eric Garcetti said Tuesday.

The San Pedro Bay ports’ leading role in reducing emissions from trucks, yard tractors and cargo-handling equipment is attracting support from large retailers and other beneficial cargo owners, most of whom now include reductions in diesel and greenhouse gas emissions as an integral part of their business plans, said Gene Seroka, executive director of the Port of Los Angeles.

BCOs each year report to their shareholders the progress they are making in emissions  reductions throughout their transportation supply chains, and the marine terminal is an important link in the chain. “The voice of the BCO is increasingly being heard,” Seroka said.

Pasha Stevedoring and Terminals had on display Tuesday electric trucks, yard tractors and forklifts that have the same pulling and lifting capacity as conventional diesel-powered equipment while generating virtually no emissions. Jeff Burgin, Pasha senior vice president, cited a yard tractor loaded with 88,000 pounds of steel slab. The vehicle can operate for 16 hours before requiring a recharge, which takes about 90 minutes, he said.

The truck and yard equipment are being integrated into the $26 million Pasha Green Omni Terminal project that is under development. The terminal will include solar-generated power and other sources of renewable energy that will allow the terminal during an emergency, such as an earthquake, to internally generate all of the power it needs from renewable sources, according to the port.

Also on Tuesday, Garcetti announced the appointment of a new advisory committee to lead the port in sustainable growth. “The Sustainable Freight Advisory Committee will guide the investments we’re making to green our port, and help us cut our emissions  to zero,” Garcetti said. In addition to funding from the port and self-funding by Pasha, the Omni Terminal project included a $14.5 million California Climate Investments grant from the California Air Resources Board.

Green port projects are part of a larger city of Los Angeles sustainable plan for goods movement throughout the region. The goal of that program, Garcetti said, is to deploy zero-emission technologies for at least 15 percent of goods-movement trips in the city by 2025.