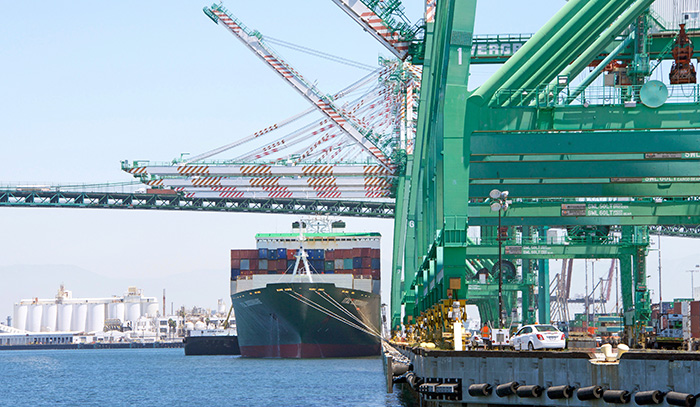 The Port of Los Angeles believes it and neighboring Long Beach can perform best by deepening cooperation.

As carrier mergers and alliance changes continue to unfold, Port of Los Angeles Executive Director Gene Seroka sees a gateway strategy developing in which the ports, carriers, and terminal operators manage assets with the singular goal of improving cargo flow in the Southern California port complex.

“We are taking a gateway view,” Seroka told JOC.com in an interview Tuesday. High-profile carrier mergers the past two years and the restructuring of carrier alliances effective April 1 have exposed the reality that carriers deploy their assets based on a need to serve gateways, rather than focusing on specific ports or terminals. Since they operate various-sized vessels in a number of trade lanes, they require access to all of the terminals in a gateway, taking full advantage of each terminal’s strengths.

Seattle and Tacoma took regional port cooperation to a new level in 2015 with creation of the Northwest Seaport Alliance. They established one organization to plan, market, and develop facilities in the entire port complex. Los Angeles and neighboring Long Beach are not going that far. Rather, with 13 container terminals, many of which are part of integrated corporations that feature shipping lines, terminals, and logistics operations, the Southern California ports recognize that the carrier vessel-sharing alliances will choose the terminals where their vessels will call.

“Carriers will be looking to put the right ships at the right terminals to best meet their service offerings,” said Mario Cordero, executive director of the Port of Long Beach.

Another reality the Southern California ports must deal with is that the changes brought about by carrier consolidation will take years to play out at the terminals. Although recent carrier mergers and the April 1 alliance restructuring have already caused a shifting of vessel calls and cargo volumes between the ports, Seroka sees a scenario unfolding over the coming years in which the port complex will develop more efficient operations for beneficial cargo owners (BCOs) because of land-use options that are emerging at the terminals. Rather than having 13 terminals and two ports competing for business, terminal developments will take place based on the ultimate goal of improving cargo flow in the entire gateway.

The bankruptcy last year of Hanjin Shipping, the merger of Cosco and China Shipping Container Line and the new company’s pending acquisition of OOCL; Hyundai Merchant Marine’s decision to dissolve its California United Terminal subsidiary in Los Angeles; the shift of a weekly service by Maersk Line and Mediterranean Shipping Co. from Los Angeles to Long Beach; and the pending merger of Mitsui O.S.K. Line, NYK, and 'K' Line into a single Japanese carrier next year will eventually cause significant changes at the marine terminals, but Seroka says the impact on terminal assets will be gradual and orderly.

He sees changes for terminals, physically and financially, as developing according to an immediate, mid-term, and longer-term timeline. He sees no immediate change in the ownership of the container terminal operators, even next year when the three Japanese lines, each with its own terminal, become one shipping line. David Arsenault, president of Logistics Transformation Solutions and former president of the Americas at HMM, agrees. “The initial focus will be on merging the liner operations. That’s a huge undertaking,” he said.

A similar scenario is likely with Cosco Shipping Holdings and OOCL and their three terminals. The terminal side is further complicated by OOCL’s $1.3 billion investment in automating its Middle Harbor terminal in Long Beach. When completed in 2019, Middle Harbor will have an annual throughput capacity of 3 million TEU containers, or about 40 percent of the annual container volume of the Port of Long Beach.

An even more complicating factor in all of the carrier/terminal developments in Southern California, where merged lines and restructured alliances often have terminal affiliates in both ports, is the long-term financial arrangement that each terminal operator has with its respective port. These contracts with the ports can have five, 10, or in the case of OOCL, almost 40 years remaining, so carriers and alliances must take a thoughtful approach to any changes in vessel strings that are being considered. “They can’t just make a snap decision,” Seroka said.

Every terminal contract is based upon a minimum annual guarantee (MAG) of container volume with the port. Since the MAGs are the ports’ main source of revenue, both Los Angeles and Long Beach take the MAG requirements seriously. Therefore, if an alliance decides to shift a string of vessels from Los Angeles to Long Beach, Seroka noted, at the end of the year the terminal in Los Angeles will have to write a check for the full amount of the MAG whether or not it moved the required volume through the Los Angeles terminal.

After a carrier merger takes place, or a new alliance arrangement settles in, an intermediate-term approach is developed. The merged carrier or alliance surveys all of its existing assets, and new vessels entering service, and matches each service with the terminal that can best handle the vessels. For example, an alliance will direct the services with the largest vessels to the largest, more modern terminals in its alliance, and strings with smaller vessels in north-south services will call at a smaller terminal operated by an alliance member.

In the long term, though, a merged carrier or new alliance must make commercial decisions to improve the bottom line. Arsenault said the three Japanese lines, each with its own terminal, will eventually have to make such a decision, which could involve a reduction of terminals. “I certainly feel three terminals is too many,” he said.

Cordero agreed that these impactful decisions will be made carefully over a period of time. A merger of three carriers, each with its own terminal affiliation, may ultimately decide that two terminals are sufficient. Then the business negotiations among the carriers and between the carriers and the port authorities will take place, and the process will be complex because of the staggered expirations of terminal leases, he said.

The ports must protect their annual revenues, which they depend upon to further develop terminals and infrastructure, Seroka said. Arsenault added that the terminals must therefore negotiate directly with their respective ports, and “it will be a bit of a challenge.” As one terminal operator executive noted: “There’s too much money involved — millions of dollars. That will be a determining factor.”

On the other hand, the liner industry is changing and will continue to change. More carrier mergers could take place, some terminal operators may choose to sell their assets to a competitor and exit the business, and there is always the possibility that a bankruptcy could force a quicker decision than might be desired. Arsenault said ports must accept the fact that these major industry events will happen regardless of what the ports may prefer.

Despite these financial challenges, the environment that is evolving gives ports, especially the massive Los Angeles-Long Beach port complex, opportunities to repurpose land, combine smaller terminals into fewer but larger facilities, and free up property that can be turned into a near-dock chassis yard or dray-off site for inbound containers, Seroka said. That is where BCOs will notice the most direct impact of terminal developments on their shipments in terms of faster delivery of containers, improved truck turn times, and more consistent availability of chassis. “The goal is to optimize the supply chain,” he said.